As I faced down the monkey who finally shifted his greedy, beady eyes from my daughter’s ice-cream to me I knew one thing... if anyone was getting bitten, it was me. Teeth barred, a hiss escaped his lips, while mine was more like a “shoo, shoo.” Finally as he stepped towards me, the Indian shopkeeper came running, yelling and waving his arms at the monkey. Giving one last hiss the hairy, big-balled creature retreated back down the stairs. We stepped back into the shadows and the safe arms of the Indian’s little shop.

Not far from our house is the amazing Batu Caves, a limestone hill, which has a series of caves and cave temples, not to mention a 147 foot gold Hindu deity and 272 steps to get to the top.  The cave is one of the most popular Hindu shrines outside India.

We found it relatively easy to drive to and the parking lot was big and spacious. It was a hot day and we had arrived at noon. The midday sun was beating down on our heads as we looked up first at the giant statue, then at the hundreds of steps.

At the front of the steps lies food scraps from humans, monkeys, birds, whatever. As we looked up at the steps we had to climb for two seconds my son took his golden opportunity. I turn around to gather the troops and he is squat position eating a gnawed on watermelon carcass. The horror! “CAIUS!” He drops it and reluctantly steps away. I am not sure whether to wash his mouth out with disinfectant, chastise him or just clear my mind and pretend it never happened. I take option 3. 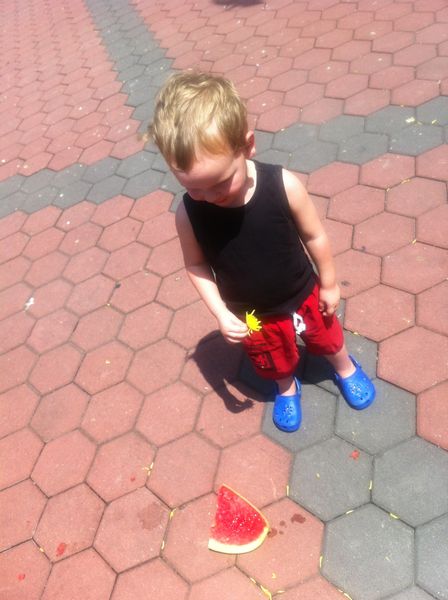 One foot after the other is the only way to go and we made a start. Caius soon tired and my trooper of a man ended carrying his 15 kilos up all two hundred and something steps. Mia was also a little trooper managing to get to the top all by herself.

Along the path are monkeys and birds and people and views, so you often stop. The monkeys are keen for food. My son loved chasing the birds and I enjoyed the variety of people who were taking the same path as us.

Fairly soon we were at the top and admiring the views before quickly retreating into the cool darkness of the cave.  It’s truly beautiful the way the light filters through, the massive expanse of it and the many corners covered in shrines for the Hindu people.

The kid’s chase birds. I chase kids terrified the monkeys will get their claws into them. Josh chases the perfect photo. After awhile we head back to the top of the stairs where there is a little convenience shop selling ice creams. We think this is a perfect way to make our way back down the stairs in the sweltering heat. 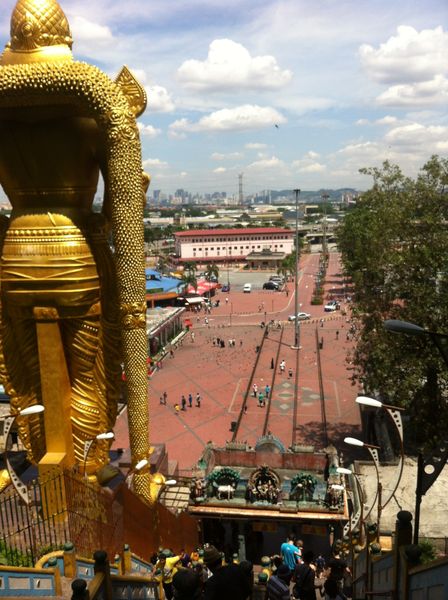 We were wrong. As we got to the beginning of the steps, it became apparent the monkeys decided the ice creams were theirs. We quickly backed up, but not before a hissing monkey and I had a stand off as he greedily eyes my daughter’s ice cream. Thank goodness for the Indian that sold us the ice creams. He spotted us and came running over threatening the monkey until he disappeared hissing his displeasure.

We retreated back to his little store where he proceeded to lecture us about staying back from the monkeys and then keeping a further eye on the monkeys to make sure no more decided to test his wrath.

After everyone had finished their ice-cream (4 for $1) and was perfectly clean (so I did not have to even think about monkeys wanting to lick my little kids faces) we made our way back down. By this time Mia was petrified of the monkeys who were trying to steal her food, and grasped my hand desperately.

Despite the hissing monkey, these monkeys are actually quite tame in comparison to the monkeys found at the Ubud Monkey Temple. They did not pose a threat until food was on the menu. Keep your hands opened and your eyes peeled, but you should find them rather amusing as they chase unsuspecting tourists hiding bananas in their coat pockets. 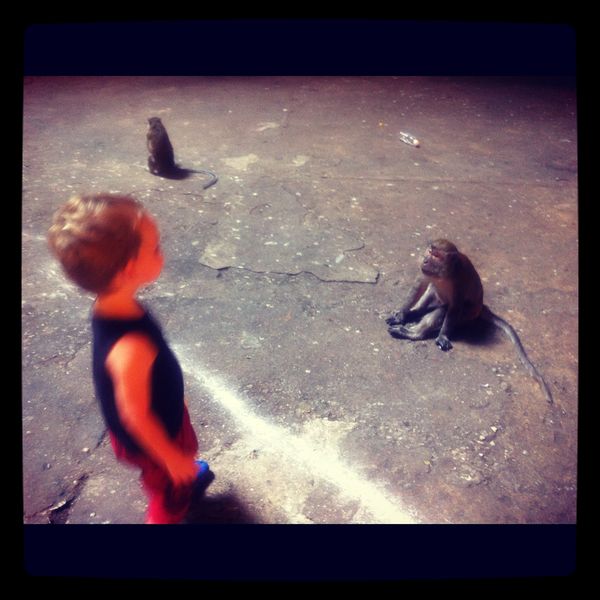 Before we hit the bottom we stopped at the Dark Cave, also know as the Cave of Life, which is the name I used for my kids. This Cave you pay for a guided tour in complete blackness with spiders and bats. How fascinating, but not something I was likely going to be able to do with a 3 year old and a 2 year old. Already Mia was at my side, clutching my hand, asking what the noise was. “A bat,” I tell her. “I don’t like bats, I don’t wanna go in the dark tunnel.” Sadly I turn away, knowing I will come back one-day… sans children.

Back down the steps in the sweltering heat, we don’t stick around, but jump straight into the air-conditioned comfort of our car. We decide to head straight to an air-conditioned mall to have lunch and all experience our first teppanyaki. The kids loved it!

What a great trip. Highly recommend a visit, even with toddlers; they will love chasing the birds/monkeys and the adventure of a giant cave. The steps are not as hard as I thought and the inside well worth it. Go take a look at this amazing God-made cavern, what a creative side He has, what beauty resides in Him. 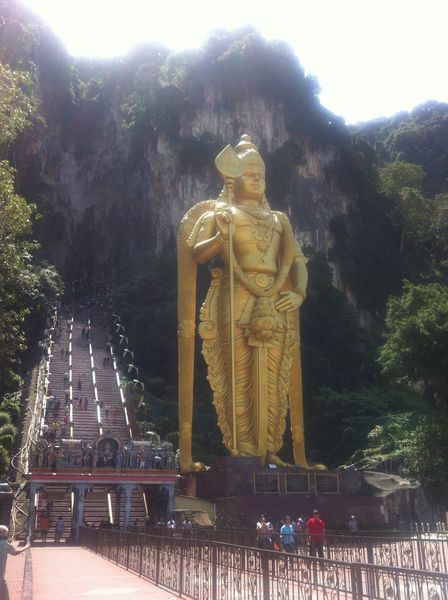 "I respond to every comment by private email. So please leave me comments, I love chatting to you" - Josh Bender
Posted by Michele @ Malaysian Meanders on Sep 30th, 2012
At the Youth Park in Penang, a monkey stole my clothes while I was in the wading pool. I eventually got it to drop them because I really didn't want to drive around in a bathing suit. A few weeks later, some monkeys got my friend's wallet while she was in the pool. It was pulling out her cash, credit cards and car keys. Luckily, she got it all back. Beware of the monkeys!