About the apartment, good, bad and ugly. We booked this holiday home through the Internet. It’s a great holiday home; it is not a home to live in. The price was $1535 for the month including all utilities, “wifi” & cleaning twice a week. 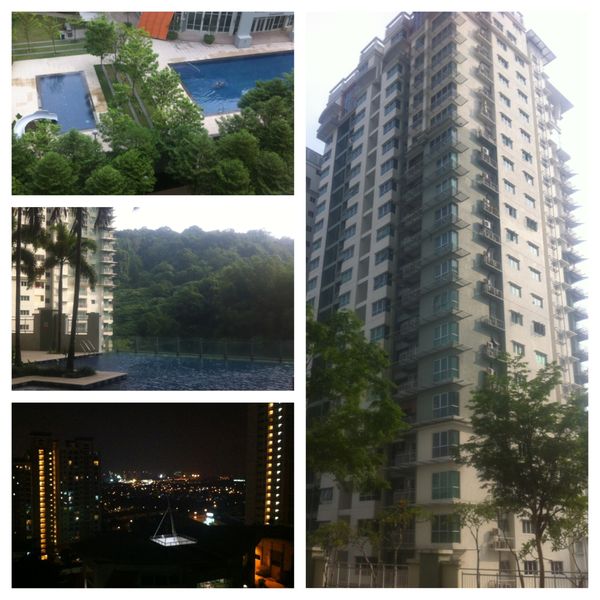 Great location, we loved living outside the city near the Curve.

Great complex – 5 pools & 3 playgrounds, a daycare, a laundromat and restaurants, it was a superb complex.

Views of all those twinkling lights were fantastic.

Amazing security, very safe. On first arrival we thought the place was real bad. There were security grills on the doors and windows. Turns out Malaysia loves security. One lady told me Australia was obsessed with getting out of the house in an emergency. Malaysians are obsessed with no one getting in.

On arrival we were told the Manager would meet us. Having no phone and no way of contacting them, we sat for nearly an hour at the door waiting until I managed to locate a security guard and borrow his phone to call them. She was at another apartment and would come soon. Not the best first impressions.

Old appliances from maybe the 70’s or 80’s. Including pots with no handles, lids with no handles and missing utensils. We had to buy a lot of our own stuff and hopefully it is a little better equipped now since we left it there – peelers, can openers, bathroom mats, etc.

Tepid temperature showers with no pressure & no shower curtain in the ensuite. The bathroom was constantly wet.

The advertised gym is not really useable. There is no aircon and the equipment is ancient. It’s all the old manual gear. There is 3 treadmills, one works and is always taken.

The kid’s pool with the slide is in need of repair. My husband removed broken tiles several times from inside the pool to the outside. The broken tiles still lie there unmaintained and very dangerous.

Promised Internet that didn’t deliver. When we first got there we were told we had unlimited Internet several times and within the first day it had reached quota. Everyday this happened for a week as the Manager fixed it and we used it again until finally she said it was limited and she had only been adding credit and she cant do it any more, thus we were left with internet that did not work during the day, maybe sometimes at less than dial-up speed. It did work between 8pm & midnight sometimes. We later discovered that the area is a bit of a hole for 3g coverage, which is what they had. We looked at moving to other places in the complex with ADSL of a 8MB speed and a lot more bandwidth. The Owner would not let us out of the agreement, despite not being able to deliver on promised items.

Josh and I ended up visiting café’s again just to get work done. The fibre optic/adsl lines had no issues and the Owner promised to have it installed after we left.

As you can see the Internet left a very bad taste in our mouth as the most important thing we look for when finding a place is the Internet. While this house would make any holidaying family there happy for a week, it was a slow torture for those of us staying the month needing to make an income.

Sorry about my little moan, but it does feel good to get that off my chest.

I visited a number of Daycares within Mutiara Damansara all along the same road. 4 on one road, all Montessori preschools. Two would not take one-month students. One, the lady was not there and the last a success. She was a lovely lady and I was all ready to enroll them, however I had one more to visit.

Within our apartment complex is a daycare/preschool. Obviously we wanted to check this out because then it is simply walking the children to school. Success. The little school had Montessori lessons and a lovely lady named Jude running it. She accepted the kid’s on a daily basis at 40RM per day = approx. AUS $12 each. The kid’s loved it and wanted to go everyday. It’s a huge relief to get the work out of the way while they are there and then have our family days every other day.

They were a little hard on the kids, I saw they had stickers and ticks on their colouring and Mia told me a few times that she can’t colour she doesn’t know how to. But they fed them well and even managed to convince them to sleep most days.

We were slightly concerned as the place was run by only one man & one woman. When the woman left one day for a meeting our Western rules & regulations took over and we were not happy that the man was left caring for the children on his own. Especially with the showers and what not that takes place. We sat down with them explained our concerns and the lady was so nice. She said she would not leave them again, that is she did she will let us know so we could come get the kids and after that they were very efficient.

In Australia you must have at least two teachers with a child at all times to stop any… well issues arising, of course. I am not sure if it is possible to expect the same in other countries? What do you think?

Our final week in KL Josh and I decided to have lunch at KL Tower. 421-metres, it is the fourth tallest telecommunications tower in the world. Races are held annually, where participants race up the stairs to the top. The tower is the highest viewpoint in Kuala Lumpur that is open to the public. The building is the landmark of Kuala Lumpur with archrival Petronas Towers. It also claims to house the highest McDonald's in the World. And of course at the top it contains a revolving restaurant, providing diners with a panoramic view of the city.

There is a dress code for the Tower so we decided to go when the kid’s were at daycare. I got in a dress, Josh put on his long pants and away we went. The traffic was terrible and we arrived over half an hour late, but it was fairly easy to find and had good parking. Alternatively we could of taken an express coach, which runs pretty well in Kuala Lumpur.

Once we received our pass at the concierge desk we bypassed the long queue of tourists waiting to visit he observatory and rode to the level above it, which is where the restaurant is.

A gorgeous place with amazing food. We were in awe of the amazing views and can imagine the evening views would be to die for. We heard the views from here are much better than the towers cause you can actually see the towers. The food was fabulous, a delicious buffet spread with sushi, salads, pasta, Western dishes, Indian dishes and so many desserts!

We had a lovely lunch and then decided to visit the observatory. It wasn’t really necessary cause we had already seen all the sights on our way around the revolving restaurant at lunch.  I recommend skipping the queue and visiting the restaurant instead of just the observatory, it was fabulous.

Out the front they have an aquarium opening soon, there is also donkey rides and market stalls. Perhaps next time we will take the kids.

"I respond to every comment by private email. So please leave me comments, I love chatting to you" - Josh Bender
Posted by karin holmes on Sep 3rd, 2012
loving the photos great artwork kids