Two nights in San Francisco is not enough! I admit it; I regret it and I will return. When we booked our stay in San Francisco we had no idea how much character this little town had, I just knew the Golden Gate Bridge was there. 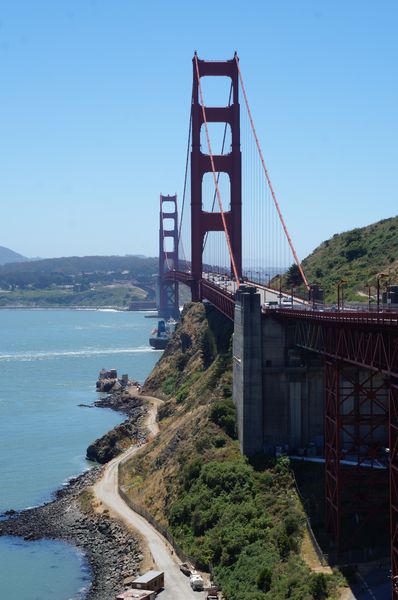 We arrived late at night after a full day of travel. One flight from New Orleans to Denver, where we had a 4-hour layover in a packed airport, before flying to San Francisco. We got in a taxi and headed to our hotel in Nob Hill, it was about $55, oh yes we had expected San Francisco to burn a hole in our pocket and that first night it didn’t disappoint.

After the most amazing sleep in the charming Huntington Hotel we had to get moving. We had a full day of activities planned and not enough time to do it all.

A short walk down the hill and we arrived at a streetcar stop. The streetcars were packed as they passed by, but it wasn’t long before one stopped and asked us to hop on board, because of the children. He was very entertaining and a lovely guy as he chatted to everyone as we made our way down Mason Street to Fisherman’s Wharf. Tickets are usually $6 per person, however we were given a free ride since we were so close. 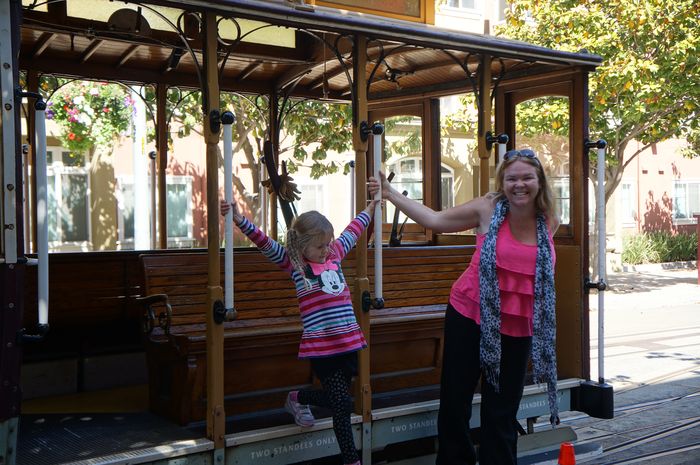 As we walked to our destination we spotted a Ross Dress For Less. No one had any warm clothes so we stopped in for a bit of shopping. We were headed on a camping trip North after San Fran and knew we might hit some cool weather. I love this store, it's cheap, branded items which means quality for less.

Loaded with our new purchases in our new backpack we found our way to the office of the Big Bus Company and headed onto the Hop-On-Hop-Off service. One of our favourite ways to see a city is via these buses. Not only is it a fast way to see a lot in a short time, it is entertaining and educational. But the best bit for us is the children can nap and we still get to enjoy all the sites. 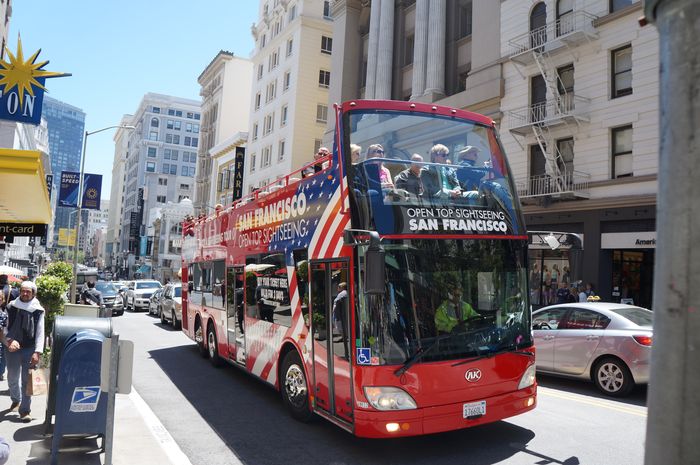 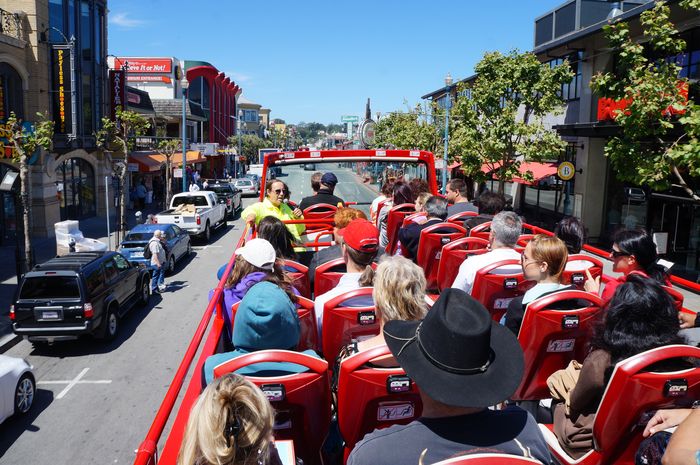 The tickets are $38 per adults, $20 per child, under 5 free. If you book on the web with a fixed date you get 10% off. The tour highlights are - Painted Ladies, Pier 39, Fisherman's Wharf, North Beach & Little Italy, Union Square, Civic Centre, Haight Ashbury, Golden Gate Park, Golden Gate Bridge, Chinatown, and Embarcadero Ferry Building.

We stayed on board for the majority of the stops as the kids had fallen asleep. We enjoyed the architecture and the crazy 44 hills in the small city. They are so steep too, it’s just incredible. 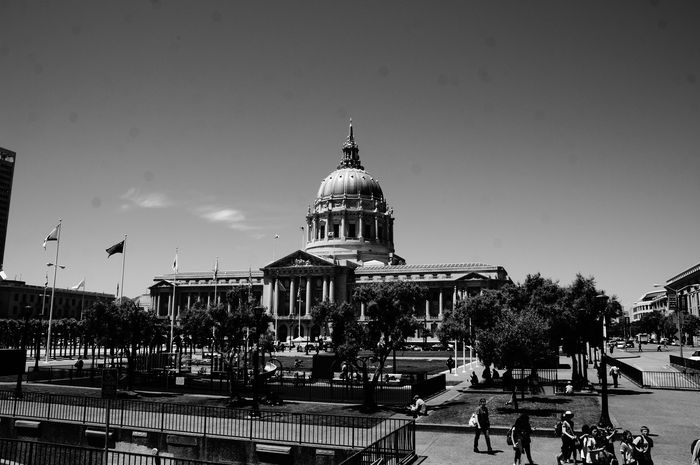 When we crossed the Golden Gate Bridge it was exhilarating and we could not help but wake the children and hop off at the viewing spot for some photos of this iconic landmark. 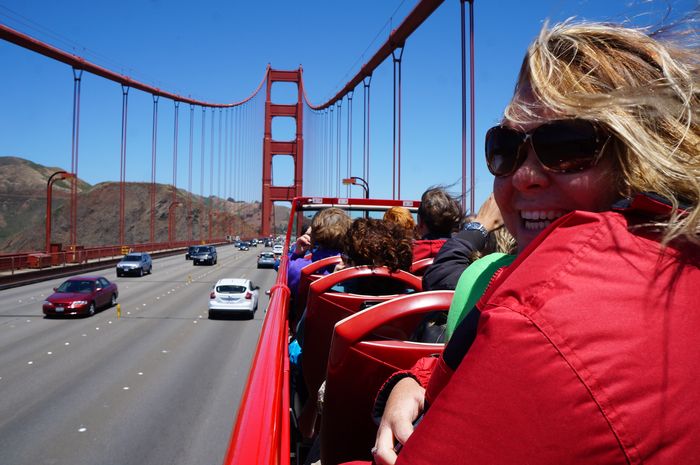 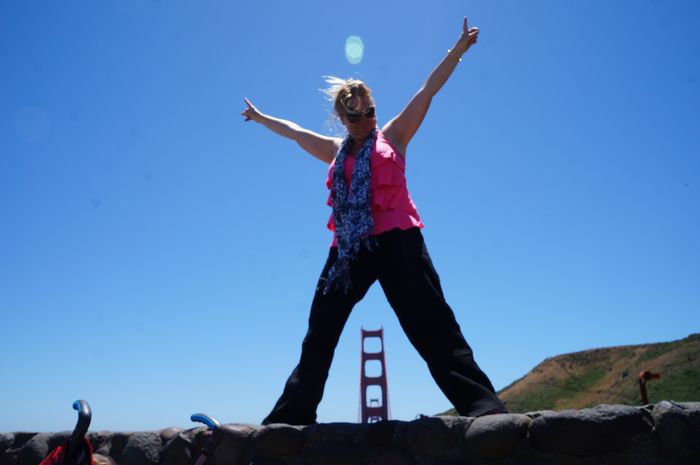 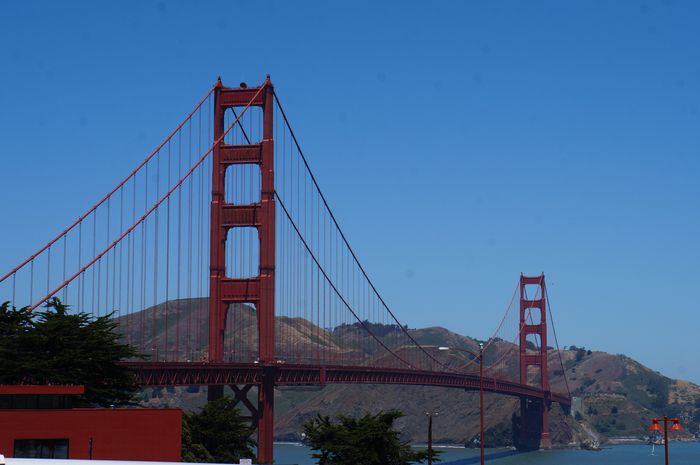 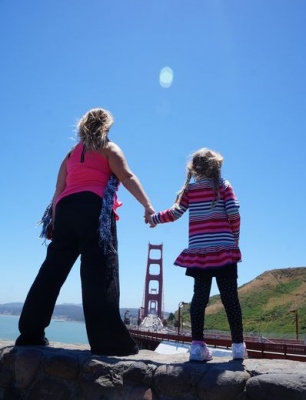 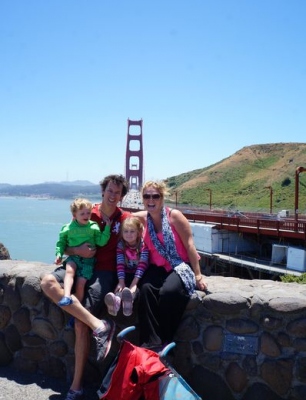 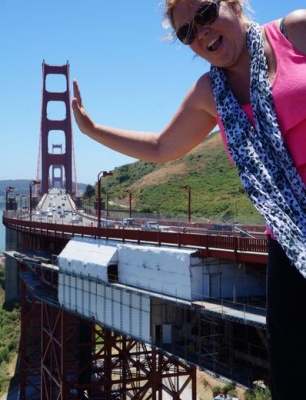 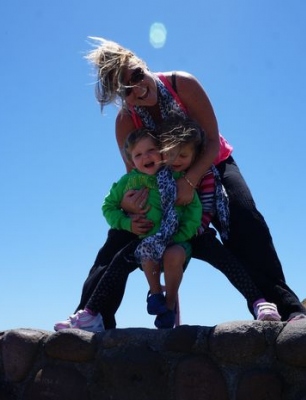 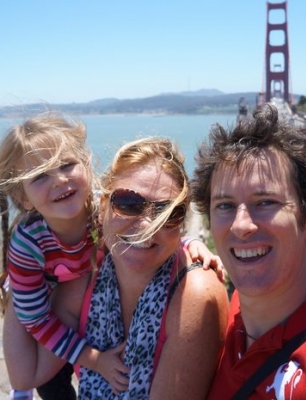 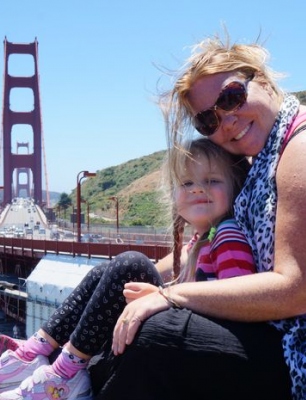 Back on the bus our next stop was Chinatown for lunch and exploration. The tour guide mentioned how small it was compared to New York, but we still found it a considerable size. We had lunch at the famous Nan King, but after actually eating in some of Asia’s best restaurants we found it to fall short of our high expectations. 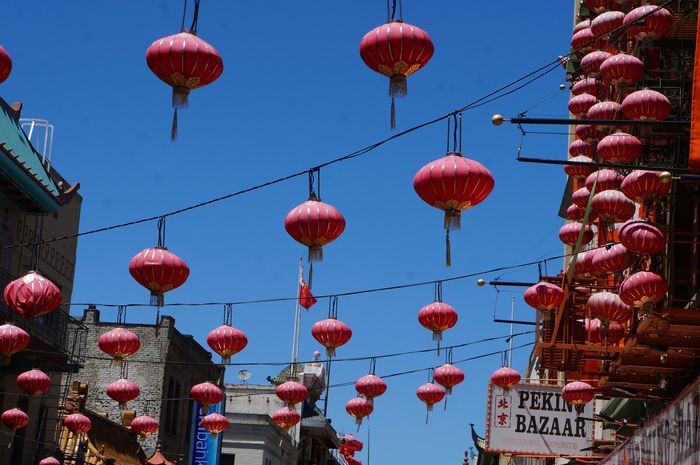 We had a walk to Washington Square before hopping back on the bus. We realized we were back at the begging so jumped off at Union Square and walked a few minutes up the road to catch the bus back at the end. Unfortunately the last bus we caught was a multi-lingual bus, which means headsets instead of a live guide. While just as informative I missed the banter the live guides provided and would recommend catching the bus with the live guides, they are fabulous.

It was late in the day when we got off at Pier 39 since we had a boat to catch to Alcatraz that night at Pier 33. We did a quick walk around the famous and delightful Pier 39, which somewhat reminded me of Brighton Pier in England or Santa Monica Pier in LA.

A brisk walk to Pier 33, we collected our tickets from Alcatraz Cruises. Tickets are $30 per adults, $18.25 per child, under 5 are free. They have family passes and note the night tours are more. Tours run everyday except Thanksgiving Day, Christmas Day and New Year's Day. 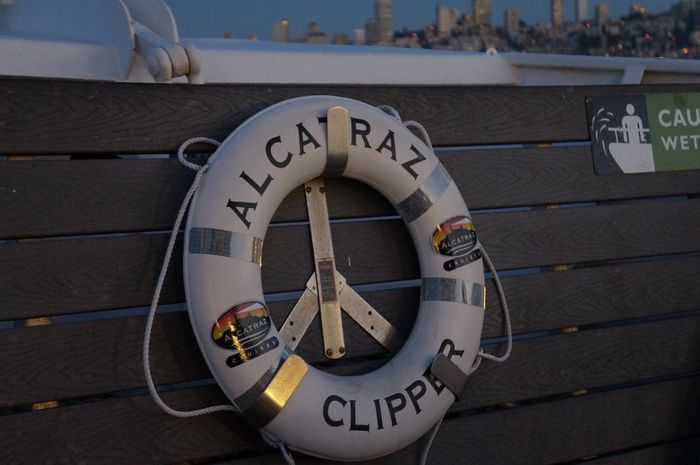 We joined the queue which moved slowly, but eventually we were all on the ferry. The ferry crossing was brief and not at all to be compared to Cozumel or Vieques. It had great views and went by fast, about 15 minutes. 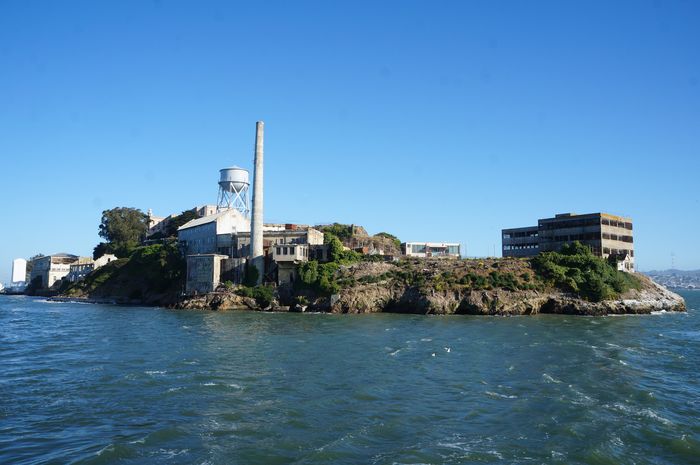 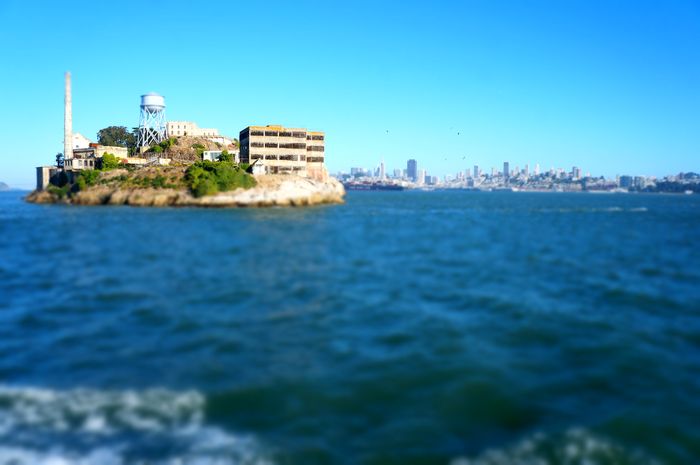 On arrival the visitors were divided into groups and each set off with a guide up the ¼ mile steep incline to the prison. Those who are unable to walk could ride a tram. They are strict about keeping it to physically unable people, however Caius just passed as a stubborn 3-year-old who would never had made that walk. It’s an easy climb though with plenty of stops and the tram goes as fast as those walking.

At the top you are given a headset and sent on your way. You have as much time or as little time as you want to walk your way through. The recording is very informative and I found myself fast-forwarding quite a lengthy bit. The prison has astounding stories of escape and intrigue interwoven in its histories and I was surprised to realize that some of the inmates are still in another jail even today. That’s a long time to be in prison. 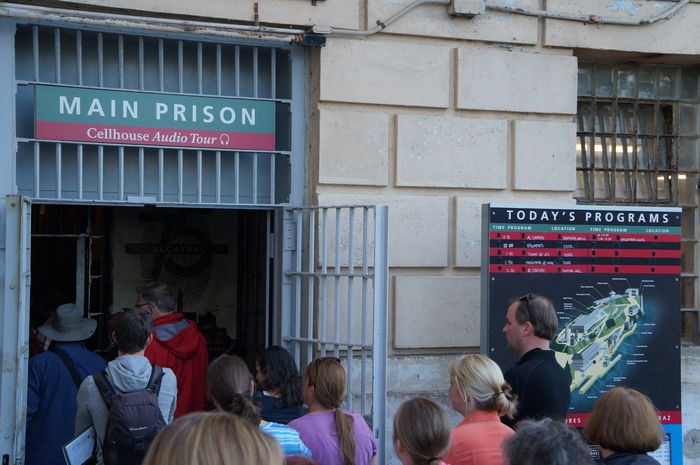 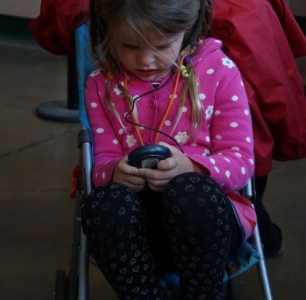 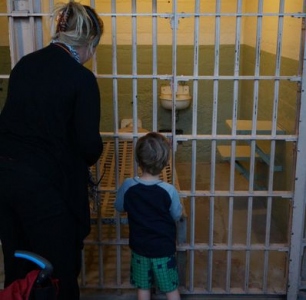 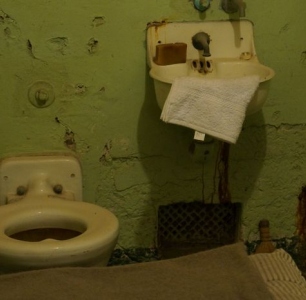 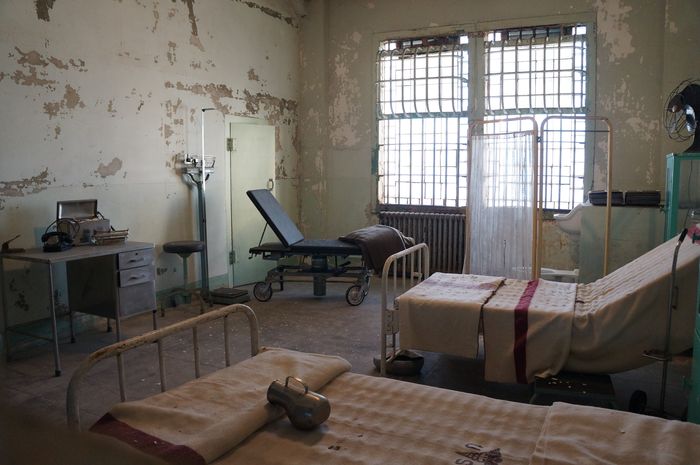 The kids got restless as the time passed and so we headed back down the path to the bottom. Going down was not half as bad. We stopped in to watch a quick Nat Geo movie before getting back to the dock for the 8:40pm ferry ride home. 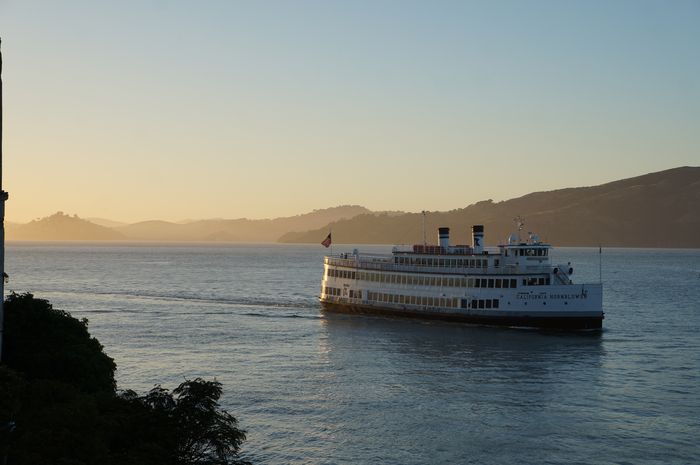 Once we were back at the Pier we took a private taxi back to our hotel for $25. We ordered room service, dressed in big fluffily robes and happily watched TV on our big screen while the kids were off in dreamland.

Phew, what a day! Tomorrow was going to be just as big. Read part 2…

"I respond to every comment by private email. So please leave me comments, I love chatting to you" - Josh Bender
Posted by Curtis on Jun 24th, 2013
Hello:

We honeymooned in San Francisco 20 years ago and have been back several times. It is a wonderful city with a lot to do, especially for kids. I wrote my Top 10 San Francisco list if you want some ideas of where to visit. Take care.