Our Foray into the "Real" Penang

Today we were honoured to have a local give us an insider’s look at Penang. It didn’t change my mind about my “real” Penang, but it certainly was a different side of Penang - one that we thoroughly enjoyed.

Beatrice from Tours by Locals met at our apartment at 9am. She was a lovely Penanganite who had lived on the island all her life. As you suspect by a tour guide she was immediately friendly and talkative and filled with local knowledge. And not just knowledge, but a love for Penang that comes from having a local take on a tour of their homeland. I have to note she was also fabulous with the kids. 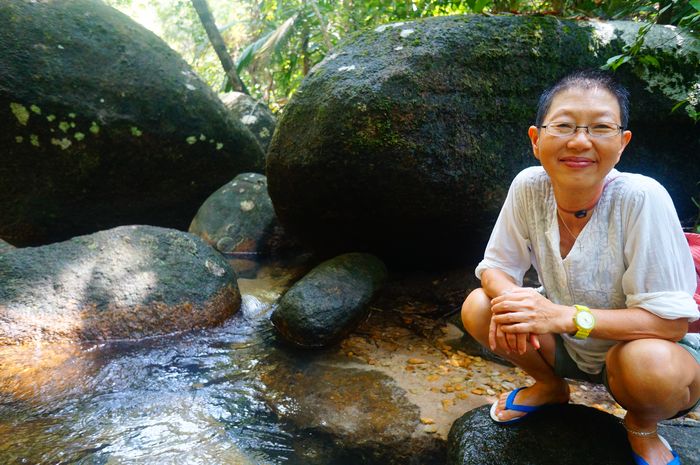 Our first step was a wet market where Beatrice picked up some traditional Malaysian sweets for us. There was also loads of fresh fish, fruit & veg and other strange and wonderful things. You can see in this photo Mia checking out the dried fish range, she was not impressed and crinkled her nose, "that's disgusting." 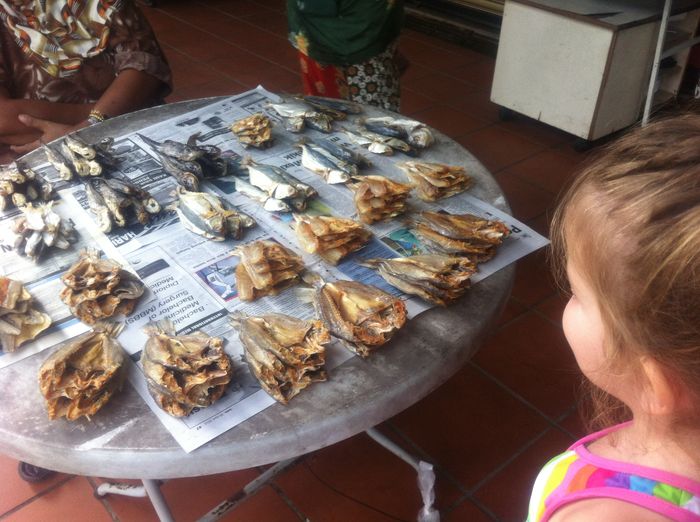 After our visit to the wet market Beatrice then drove us to Penang National Park where one boat man greeted her cheerfully familiar with her visit. We signed ourselves in and soon found ourselves walking a wood slat bridge out to sea where the water was, the tide had yet to come in.

Having done this before with the travelling families that visited we were somewhat familiar with the process. But what a difference it was having someone who knew where we were going and what we were seeing. And someone whom we could ask questions to and receive answers. Granted there was not as much gaity or fairy bread, but there was knowledge and unschooling at its best.

Bouncing over the green-brown water was still delightful. The breeze was pleasant; the beautiful, lush, green tropical landscape we passed was very scenic. The white-bellied eagles soared high above us in search of fish in the water below, and a few different species of monkeys were also playing along the warm rocks on the ocean edge. It was a grand day to be at sea and soon we were pulling into our destination.

The boat arrived at the natural meromictic lake. As previously described this lake is only one of 20 meromitic lakes in the world. This lake, however, is seasonal and as per last week the lake was still dry. Beatrice explained that once the monsoons hit in late October, early November the fresh water entering the sea gets blocked by sand and the lake begins to fill. The salt water sits at the bottom of the lake and the fresh water coming down from the jungle sits on top creating a spectacular floating lake that the locals and visitors love to swim in. 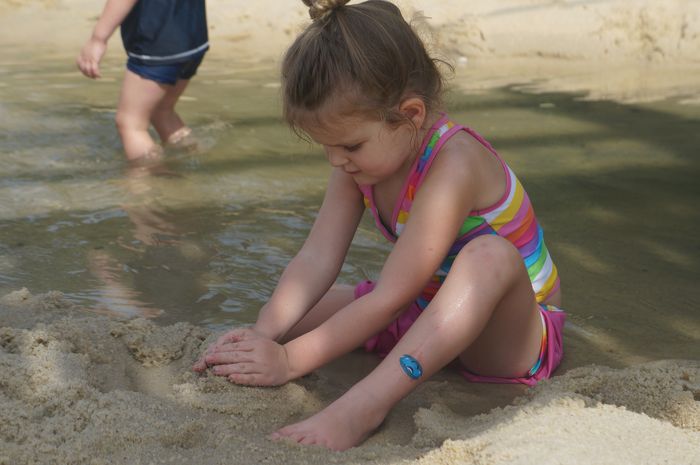 The kids enjoyed playing in the fresh water flowing down from the jungle into the sea, while Beatrice recalled her time during the 2003 tsunami. She was actually on this island and happened to walk into the jungle for a hike with her husband when the tsunami hit. A friend of hers was on the beach and witnessed the sea receding, not knowing what was happening he climbed a nearby tree 30 feet into the air just as the wave came rolling in. He survived, but all his fishing equipment and boat were gone. Beatrice and her husband heard and saw nothing in the jungle until they were on their way back to the entrance and they met a group of tourists who filled them in. Their parents called them in as missing persons as they struggled to find their way home with the floods, traffic and panic overtaking the small island of Penang. A remarkable first hand experience.

As the minutes ticked by and the sun grew hotter we coaxed bribed persuaded dragged the children out of the water and took a small walk to the opposite side of the beach to the turtle hatchery. The water was being changed in the small turtle tank and my daughter was horrified that all the turtles were dead. The man explained that they were just resting until the water could be put back in. I hope he was telling the truth. The turtle hatchery is ok, nothing special about it, but they are doing a good work taking care of the little turtles that are left abandoned by their mum once born.

By this time Caius was exhausted and hot. Beatrice wanted to hike further into the jungle and take us to a fresh water stream, however I knew the kids would not make it. So Mia, Caius and I sat down on a hut at the beach to rest and eat, while Josh & Beatrice went for the hike. 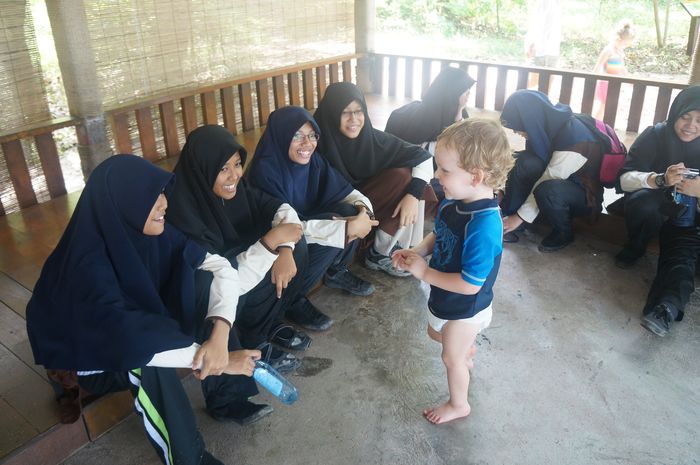 While they were gone we ate some snacks and Mia found a small stage which her and Caius took turns performing on until a group of high school students inundated the building. They were a bunch of gorgeous girls in headdresses. They had walked from Penang National Park. What took us 10 minutes by boat had taken them 1.5 hours in long sleeves, tracksuits and headdresses. They looked hot, exhausted and worst of all there was no cooling in the ocean for them. But they were happy enough and absolutely loved giving my kids cookies and watching their antics. 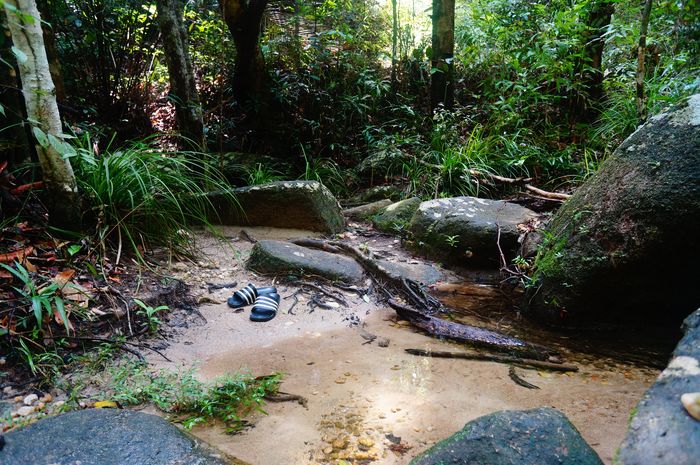 “The hike wound through some luscious tropical jungle. It was about a 15-minute walk from the beach that led us into an opening near a small stream. The water was crystal clear and cool. It was amazing. Tranquil, serene, a perfect place to stop for a picnic lunch and a dip in the stream. It was like I was in a completely different world, alone and embracing the gentle jungle reverberations. It felt like I was a thousand miles from anywhere.” Josh

When Josh and Beatrice arrived back from their foray into the jungle we went through the bag of Malaysian sweets Beatrice had brought, trying lots of different foods. Most I did not relish, but the kids and Josh polished off everything. Caius was especially fond of the two types of local bananas and went through about 5! 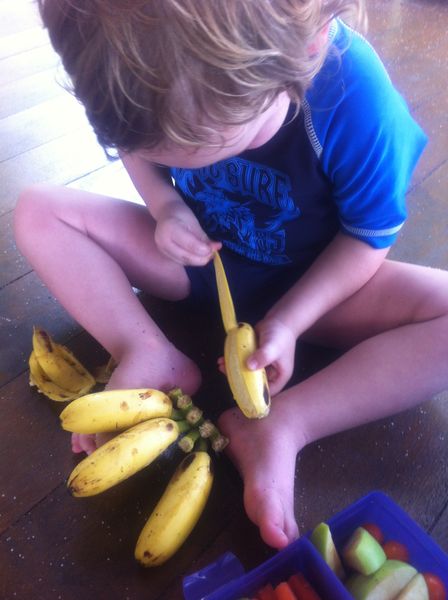 The boat arrived back to pick us up so we said goodbye to all our new friends and jumped back on board for a crazy ride back. Mia had convinced the Captain to let her drive and she spent the entire journey on his lap driving our long boat back to the National Park. Only in Asia! 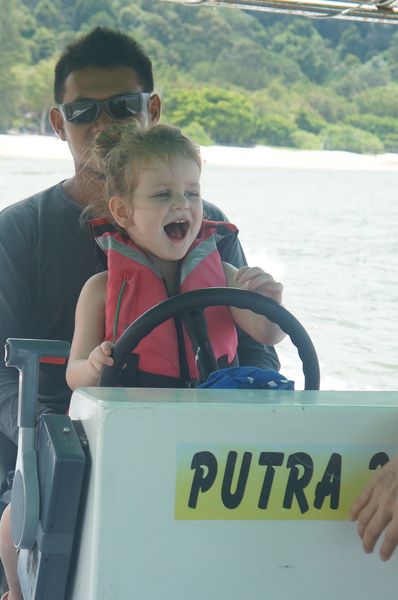 When we got back Beatrice offered to take us to lunch. She pulled into a tiny restaurant on the side of the road selling typical Malaysian Nasi Kandar. Nasi Kandar is a popular northern Malaysian dish, which originates from Penang. It is a meal of steamed rice and served with a variety of curries and side dishes. She pointed out the chicken dishes to me and I got stuck into the bountiful bursts of flavour and strange spices. Quite a picky eater, I did not take up quite a number of the dishes, but there were 3 standout ones. A beautiful chicken leg so tender and juicy, an Indian potato curry and some fried potato chips. Josh even tried the popular Malaysian electrolyte drink, Plus100.

We climbed back into the cool air-conditioned car for Beatrice to drive us home. What an adventure we had and we had learned so much. We chatted about other tours Beatrice could do around the area and are very much looking forward to seeing her again, hopefully for a food tour.

I can highly recommend Tours by Locals and am hoping we can visit each country through the eyes of a “real” local enhancing my real experiences.

"I respond to every comment by private email. So please leave me comments, I love chatting to you" - Josh Bender
Posted by GINA EDWARDS on Oct 27th, 2012
Hi there,

We are older parents of a 9 year old, and thinking of moving to Penang when my husband retires at 55 (in 2 years). We have looked at the Uplands International School in Penang, which looks fabulous...and have heard it's very easy to live in Penang on about 30,000 AUD plus school fees a year. Also have been told about the Malaysia my second home visa, which would allow us unlimited re-entry for 10 years, there fore allowing us to travel to Europe and Asia in the school holidays. Do you think Penang would be a good place to "settle". I work olnine and may continue to do that, an I would just like my husband to de-stress and get fit!!!

Would appreciate your input :)
Posted by Erin on Oct 29th, 2012
Hi Gina, I have emailed you directly. But in short - Yes, Penang is totally liveable in my opinion!