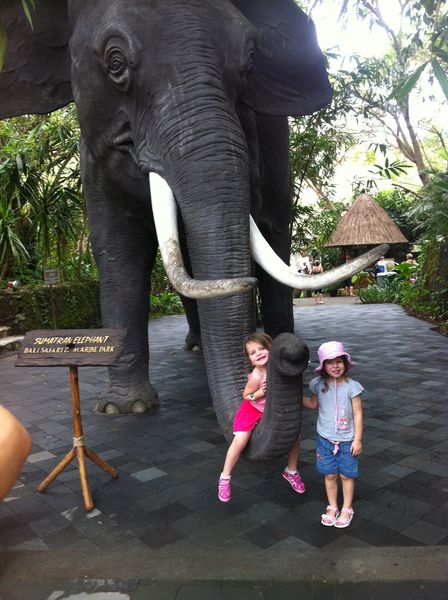 The drive for us from Ubud to Ginayer took over an hour, but we got to traverse some amazing countryside and drive on the freeway, which was pretty awesome.

The parking lot is free at the park and easily accessible. Once there our friend had organized her driver to reserve us tickets. The normal adult price is $45 US per person, under 3 free, over 3 same price. But if you call them (which he did standing in the foyer) and reserve a ticket, you go to another line, pay them and the ticket was $40.

Josh and I had come a number of years ago and paid roughly $16 to get in, bypassing the water park and fun zone. They no longer have this option now and the cheapest ticket is the $45 one which includes entrance to the safari park, marine park, waterpark & fun zone.  I guess the other parks were not getting many visitors.

On entry you take a bus ride through the jungle to the park. We hired a pram for around $10 and made our way through the small marine park. I am not sure why they include this in the title, as a few fish tanks filled with fish doesn’t strike me as a marine park. The piranhas are probably the coolest thing you will see there and then only at feeding time. Don’t wait till the last feed at 4 pm they are pretty full by then and didn’t destroy the chicken carcass as quickly as the first feed.

On to see the animals. If you have been to any zoo then you probably don’t need to pay this much money to go here. The animals are few and far between with the most exciting bits feeding $3 worth of bananas to an elephant. You take a small bus ride meant to replicate the safari through “India,” “Africa,” etc. Again there is a lot of ground to cover, but not many animals and as they do, they are all asleep.

We may be biased having seen the best zoos in the world at Singapore Zoo & San Diego Zoo, but really even having seen Perth zoo you’ve probably seen more then you will here.

On our last visit we ate at the lion restaurant. It has windows overlooking the lion enclosure where a lion could be sleeping right next to you. That was pretty awesome view, but the food was ok, the price steep and we decided to skip that this time.

All in all the park is a let down. We had seen everything within 1.5 hours. By now the kids were hungry and hot so we made our way to the waterpark.

The park is a little run down. There are cracks on the slides, which I was terrified would not hold my weight and the whole thing looked rather shabby- strange for a fairly new venue. The adult’s pool looked very tropical, however we had not brought our bathers only the kids ones. I ended up going in fully clothed with the children and they had a blast.

We probably spent more time in the pool then the safari. Finally we dragged them away and went to check out the fun zone. Maybe it had been fun. It looks more like a deserted carnival ground. There are maybe 7 rides all up, some operating, others not. Not too much for the adults, but my toddlers loved it. I don’t know if it’s a work in progress or just a work not completed.

Mia 7 Caius went on a little car coaster, the merry go round, a water coaster (which my 3 yr. old was determined to go on & then hated), a jungle cruise (someone wake me when it’s over), and bumper cars that you are actually still allowed to crash, bang & bump.

We would not return to this park, however I have to admit my toddlers loved it and for a first time it probably would be ok. After all was said and done we jumped back in the car on the way home. Both kids were asleep in an instant.

My favourite part of the day came, as we were travelling along and the rain started. We spotted a little cart selling hot corncobs on the side of the road. We got 2 for $1. I would say the guy was stoked with the price, but so was I. Knowing that the only time I had previously found hot corn was at Waterbom for $2 for 1. J It was so sweet and delicious, a real treat.

So the verdict I guess that’s my title: yes, no, maybe…

I WANT TO SEE PICTURES!

"I respond to every comment by private email. So please leave me comments, I love chatting to you" - Josh Bender
Posted by Mel on Jun 3rd, 2012
Bali Safari and Marine park has always been a highlight for us, though we stay the night in one of their African style mud huts - we love it. The pool is right next to the zebra's and Nelson the Rhino, so its Fab for an early morning swim!! We always make a point of catching the shows, I loved the elephant washing, animal show and the best is the white lions :-) The Tsavo Restaurant is great, pricey, but its awesome watching the lions. Depending on what time of the day you go they are more active than others. One time they were mating... and of course we were all fascinated!! Haha
I do agree however that the 'marine park' is pretty boring... but we've been there twice now, so we will give it a miss for a while.
Posted by Mel on Jun 3rd, 2012
Oops, white tigers... not lions!