I am not sure when the dream started. Maybe it was when I was much younger, maybe it wasn’t until New Years Eve the movie hit the cinema. Whenever it was I knew long before we got to the USA that I wanted a). A White Christmas and b). To see the ball drop in Times Square on New Years Eve.

When our fellow friends from Australia were going to be in New York at the same time we both started researching where and when was the best way to see the Ball Drop.

We had no interest in standing in the crowds on the ground in minus degree weather, not moving, not being able to pee and losing your spot if you do. We had no interest in the $1000+ tickets most places were selling to watch the ball drop from their buildings. So what to do?

Eventually we decided on a VIP Top of the World ticket at the AMC Empire 25 building on 42nd Street for $125 each. It didn’t come with a ball drop view, but it did come with an option to go down to the street to view the ball drop when the time came.

I had spent a good amount of time in the shops looking for the perfect dress. I am not sure why, because it spent most of the time hidden under my new, puffy Guess jacket (yay for discount stores). But anyway I did have a nice black dress with sequins. What you couldn't see was under the dress I had a t-shirt and under my leggings I had on thick stockings. These layers kept me warm through the minus temperatures that night. But you can't tell all that in this photo. Here I am on my way, you can feel my childish glee, right? 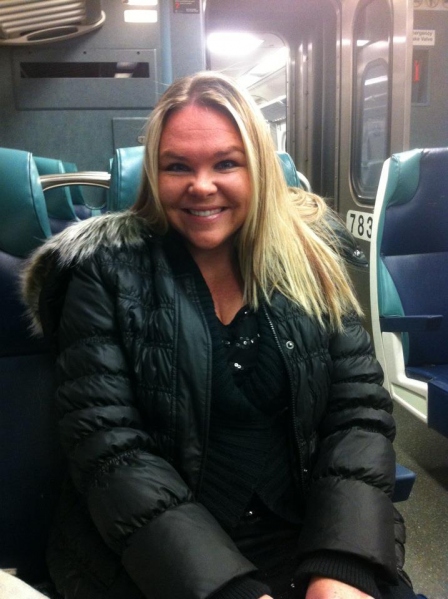 The people we were staying with had a housekeeper who had offered to babysit the kids. We were so blessed by this, especially for that night of the year. We left them about 4pm and headed into the city… on a surprisingly quiet train ride. Penn Station was not so quiet. The crowds were milling and the excitement was brewing. Cops were out in force and so were the opportunistic wares being sold like 2013 glasses, hats and other items.

Our friends got lost on the Subway so Josh and I went for a quick bite to eat before meeting up with them at a very late 7pm. When we started our walk down 7th Avenue to Times Square it wasn’t that bad, but as soon as 42nd street came in sight the crowd was thick and not moving. We could not get through with threats, pushing or sweet talk. We finally cornered a cop who told us to try 8th Avenue.

8th Avenue was not as busy and we got much closer than 7th Avenue could get us, but still a crowd stood between the barrier, and where our party was located. It took us awhile before we finally were told about the line against the wall. A long line that inched up every so minutes or something. We went to the front and asked what the queue was and found that most people had a AMC ticket and it was the only place the police were allowing people through to get to the party. We decided to join the line there (sorry to everyone behind us) and found ourselves passing strict security (bag checks, coat checks) before finally being allowed onto the street for the party we had paid for!

The excitement was now snowballing. The freak-out moment of not getting to our party was over and we were finally past hundreds of people on a street they all wanted to be on. The money suddenly well spent.

AMC Empire 25 is a large cinema complex. There are 6 floors of theatres. Our ticket allowed us access to every floor including the top. We were allowed onto the balcony before 10pm, but after 10pm only those that paid $1800 were allowed out. We found out through talking to the other hundreds of Australians that werre there (why were there so many Aussies I will never know) that the 4th level balcony also had viewing of the ball and was included in our ticket. Also included was a buffet, open bar and movies playing all night long in 25 cinemas, free with popcorn, cookies & brownies, oh and did I mention drinks?

We didn’t stop to look at the other floors, but took the escalators one after the other straight to the top and straight out to the balcony for photos with the ball and our beautiful covered up dresses. 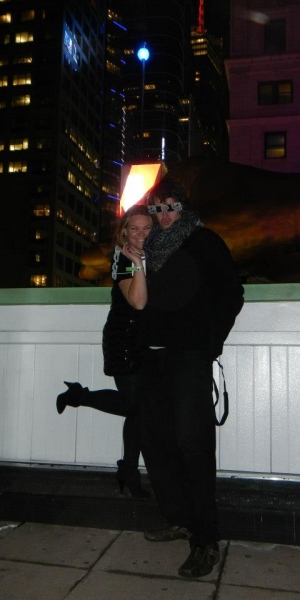 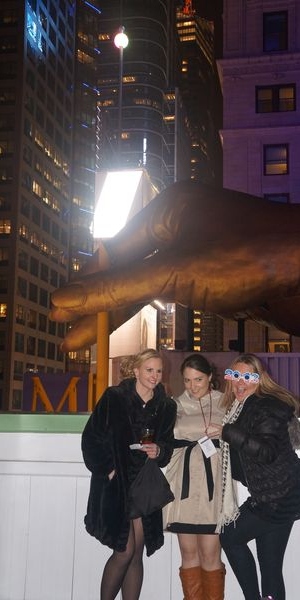 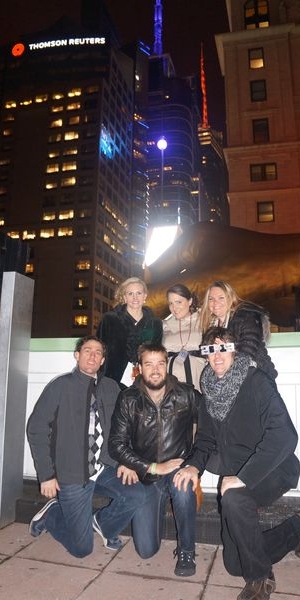 The rest of the night was spent eating, drinking, and dancing. We even fit in Django Unchained for an hour before midnight and then the other hour about 1am to finish it off. Violent film Tarantino, what happened to you as a kid? 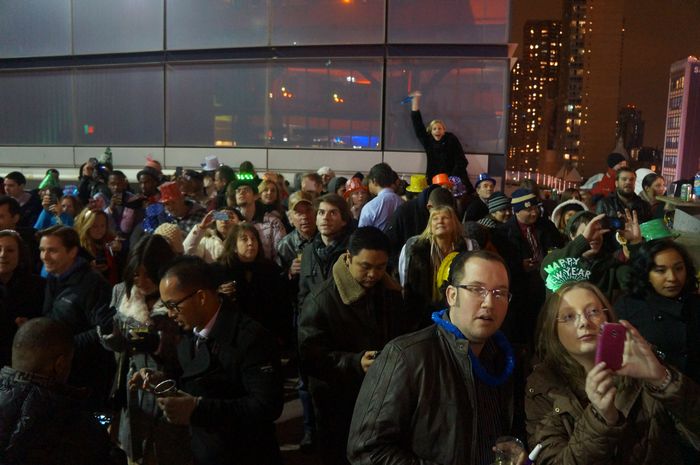 At twenty to twelve we raced down to floor 4 and out onto the balcony for a back spot to view the ball (see my friend waving in the background?). Soon it seems half the building was joining us and the crowd got raucous and wild. The TV on the inside showed us what was happening down on the ground where Taylor Swift was singing and the countdown started. I couldn’t believe my eyes as I watched the ball drop shouting the numbers down to plant a big wet one on my hubby as 2012 departed to be never seen again and 2013 dawned upon us as bright and fresh and crazy loud as a newborn baby. 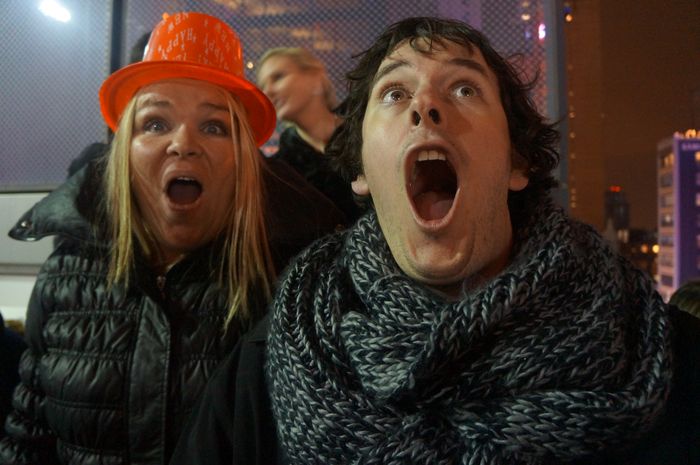 Hugs and kisses with strangers, photos with randoms and photos of all the people with their iPhones out taking photos. Once we went back inside we proceeded to dance the night away, while my non-dancing husband decided to avail himself to some more movies.

Before we knew it, it was heading towards 3am and we thought we had best get home to our children. We wished our Australian friends the warmest new years wishes and heart-felt thanks for joining us on our bucket list item – CHECK!

The walk through the streets was still buzzing and the trash was overwhelming. There were people already working on it and there were still cops and barricades everywhere. 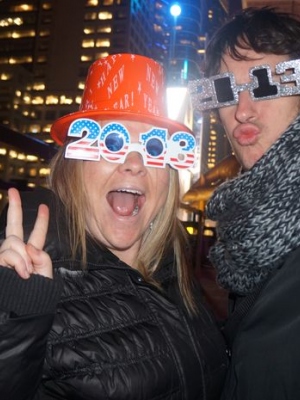 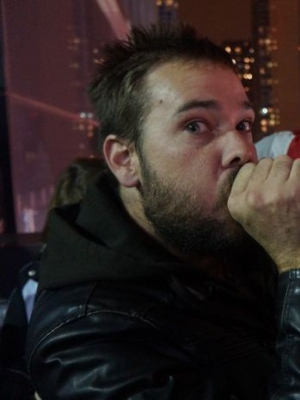 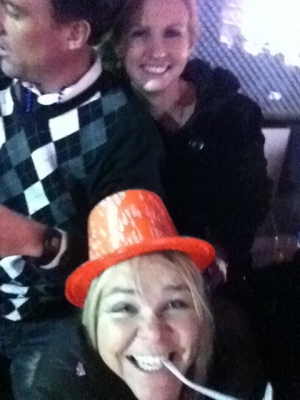 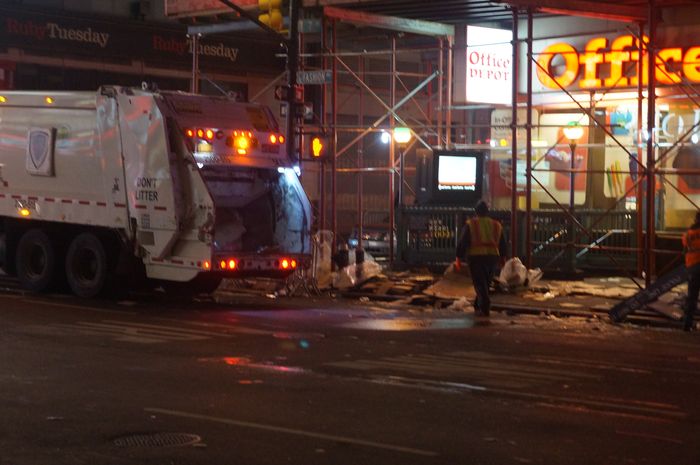 The train took awhile to arrive. Once aboard I said to my husband, “are you going to stay awake?” With his affirmation I fell asleep immediately. Only to awake to my husband shaking me telling me he fell asleep and we missed our stop! It was a cold wait at 4am on a train track eagerly anticipating the 4:20am train back to our stop. And I had never been more excited to get in my bed, as I was that night after checking on my wee little ones. Although knowing they would be up in less than 2 hours did put a dampen on my good night.

Now its over and I have to be honest I am still remembering it fondly. It was a bucket list item that I had never thought would be possible with kids and was thinking maybe in 20 years time. While I never got to feel the big crowd at midnight or see the celebs up close I was more than happy with my New Years Eve on Top of the World. 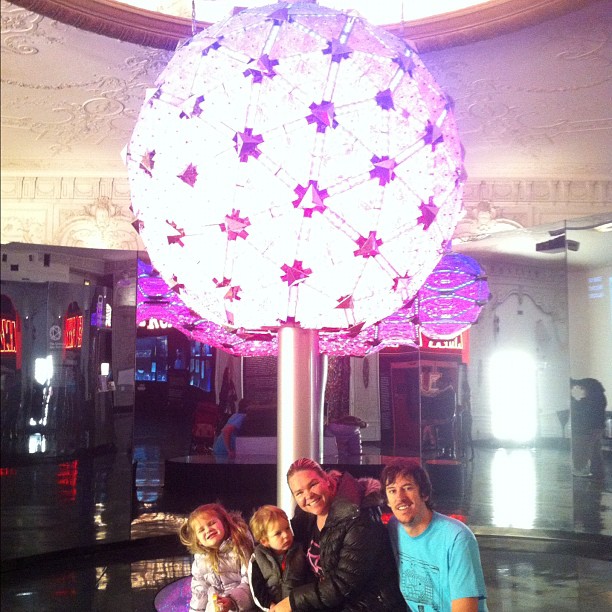 "I respond to every comment by private email. So please leave me comments, I love chatting to you" - Josh Bender
Posted by Bethaney - Flashpacker Family on Jan 13th, 2013
Sounds like an amazing, once in a lifetime experience!
Posted by Karin on Jan 13th, 2013
I love reading stories and beautiful shot of you on the train
Posted by Rhiannon on Jan 31st, 2013
You look gorgeous Erin! xxx
Posted by Vinicius on Sep 26th, 2013
Hello Erin do you have the contact in AMC to buy a ticket for new years eve, i see the pictures and i want to do the same.
[email protected]