I recently spent 3 days in Thessaloniki situated along the north of Greece. There are few places in the world where the evidence of colliding empires is so vivid as this particular city. With over 2,300 years of civilization, this region has been home to ancient Greeks, Romans, Byzantines, Ottomans and finally modern Greeks. Each empire left its mark both culturally and materially – in the architecture, in the food, in the way of life. Thessaloniki has been the cradle of innovation in ancient times and still flows with the same creative energy today. This history presented the perfect backdrop to capture the following scenes of the city. Scenes of everyday candid life. Scenes of ancient ruins. Scenes of spectacular vistas.

What is almost equally amazing is there has been very little focus on tourism in the past. Only the recent Greek Crisis has shifted the focus of the city to look outward for it’s recovery. So while it’s Greece’s 2nd largest city and firmly holds the reputation of Greece’s food capital, it still flies under the radar for most holidaymakers.

I hope that if you didn’t know much about Thessaloniki before reading this, by the end the post you’ll have a better feel for the unique fusion that defines this city. 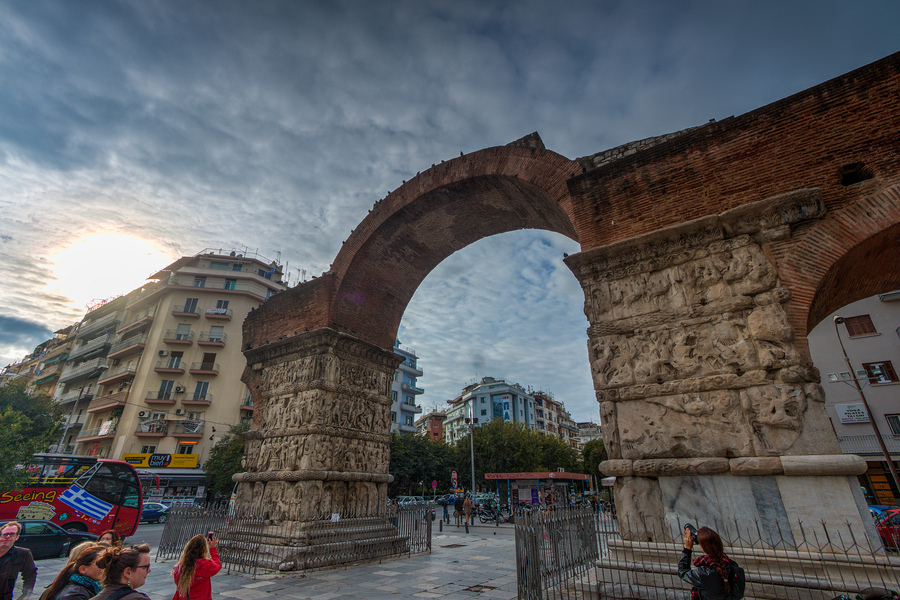 Ancient Roman arch from a former aqueduct, still standing proudly in the centre of the city. 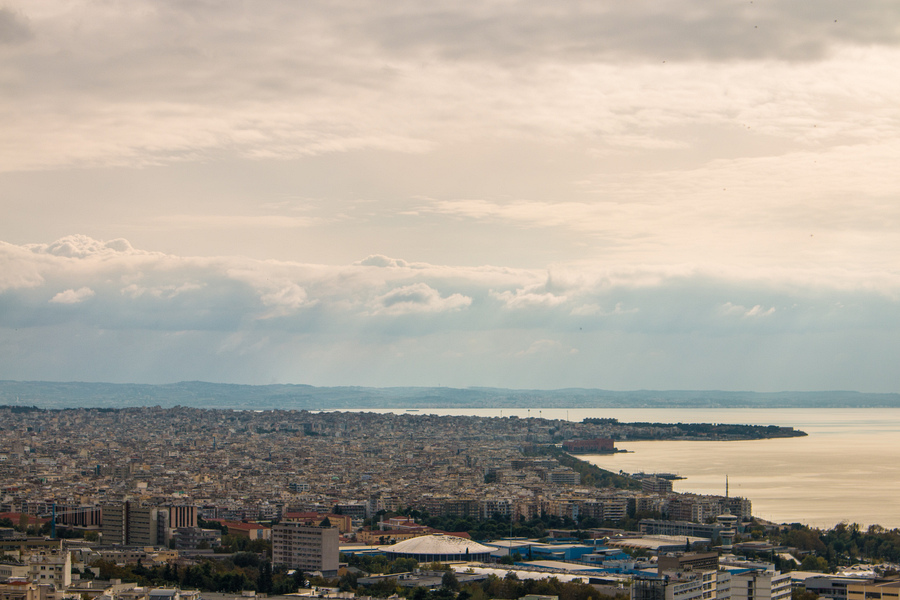 Late Autumn sun dancing on the clouds above Thessaloniki. On a clear day Mount Olympus, the mountain of the gods, can be seen on the horizon. 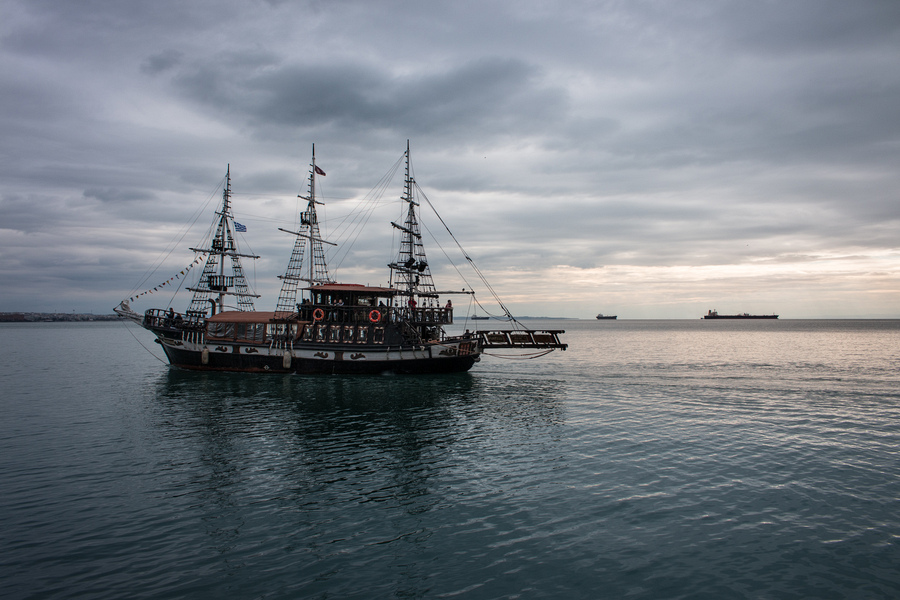 Ship cruising past the waterfront – the longest urban waterfront in Europe, stretching over 5 kilometres. 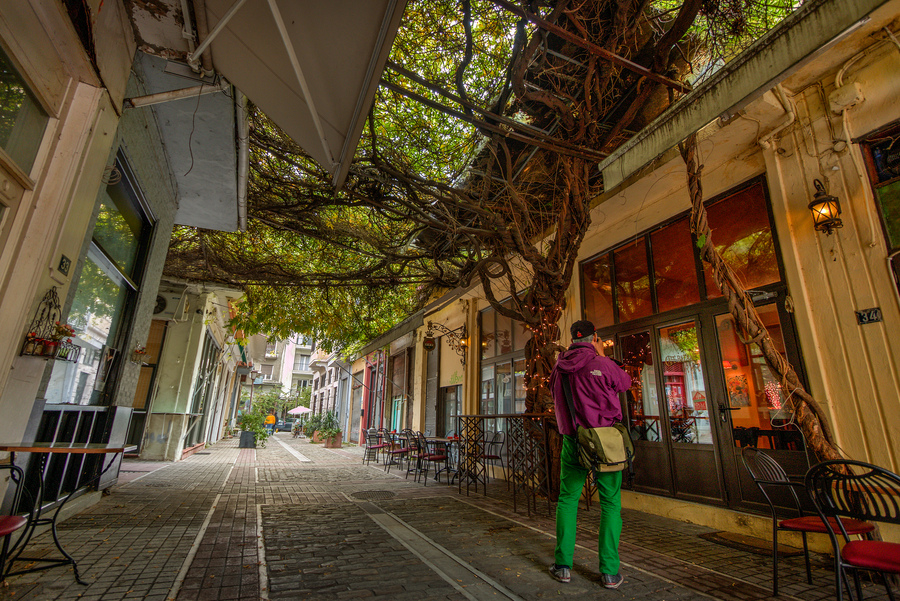 One of the countless small streets housing cafes, bars, shops and even vines like this fine specimen. 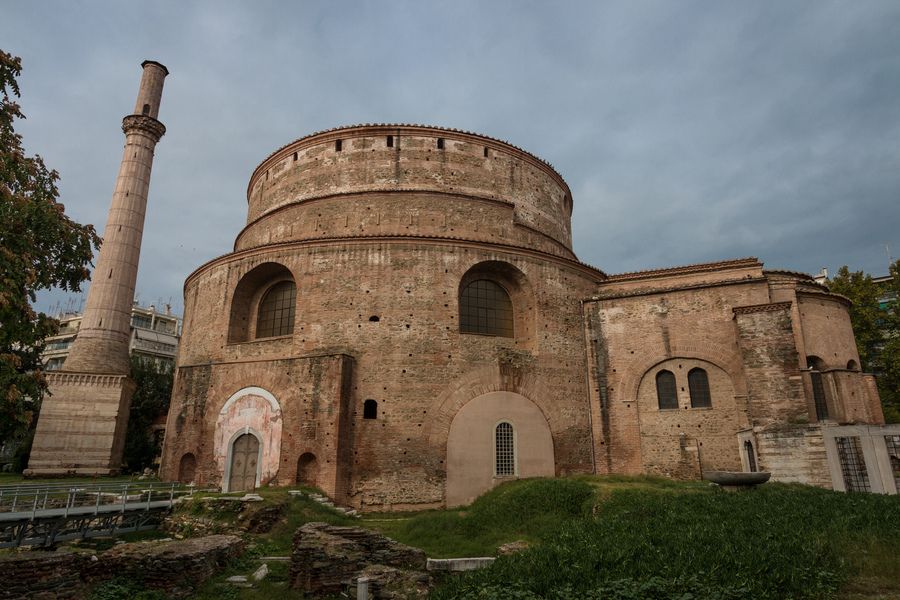 One of the finest preserved Ancient Roman ruins, ‘The Rotunda’. Originally it was built as a place for pagan worship. Later it was transformed into a Christian church by the Byzantines. Following on it was repurposed as a mosque by the Ottomans. Now it is a museum. 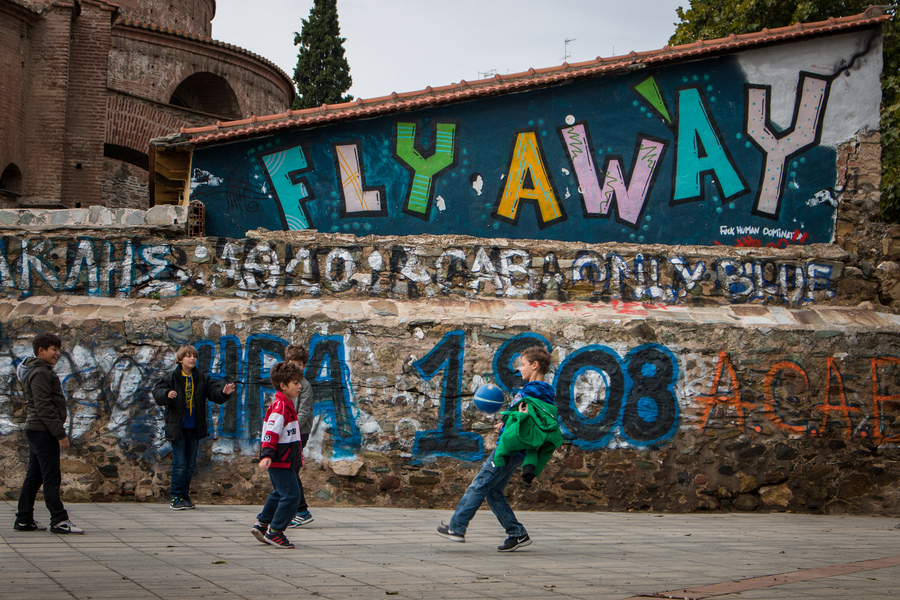 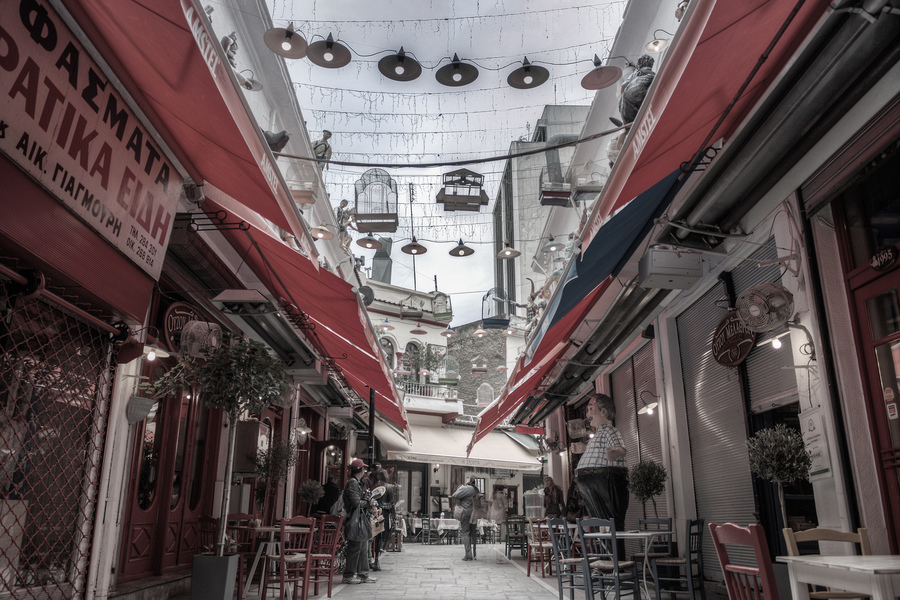 Red awnings cover the narrow laneway which is where we discovered Ouzou Melathron, a fabulous Greek restaurant. 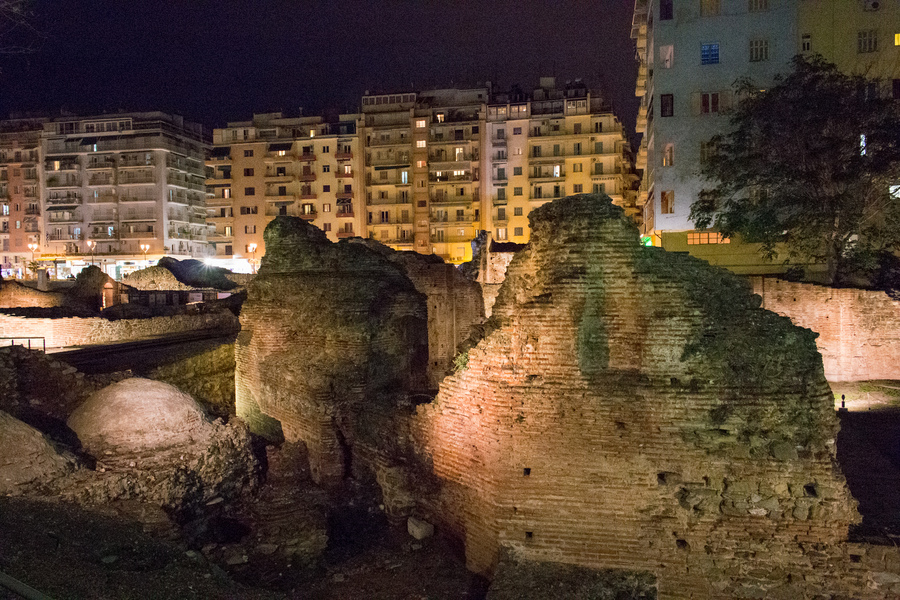 Ancient ruins side-by-side with modern apartments in the centre of the city. 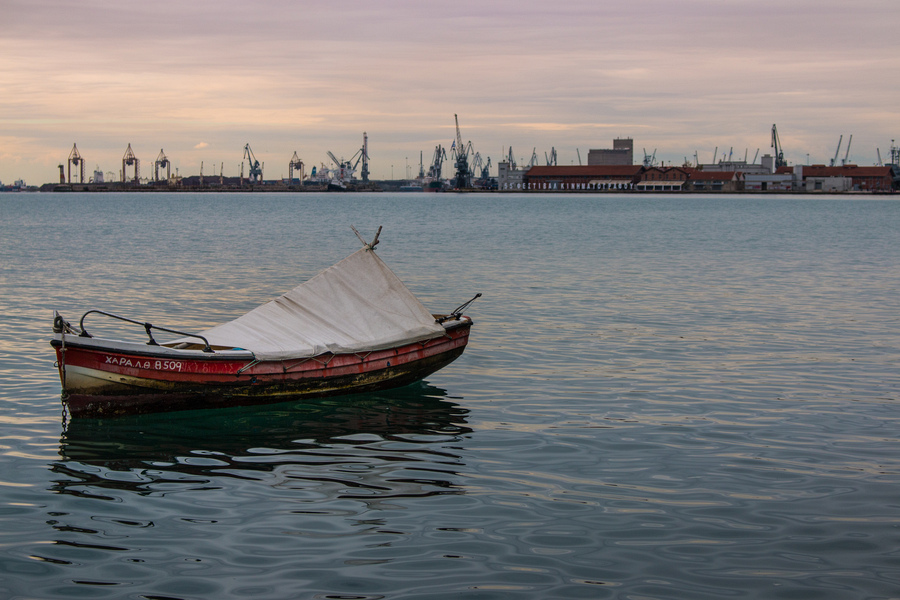 Small fishing boat moored on the waterfront with the bustling port in the background. 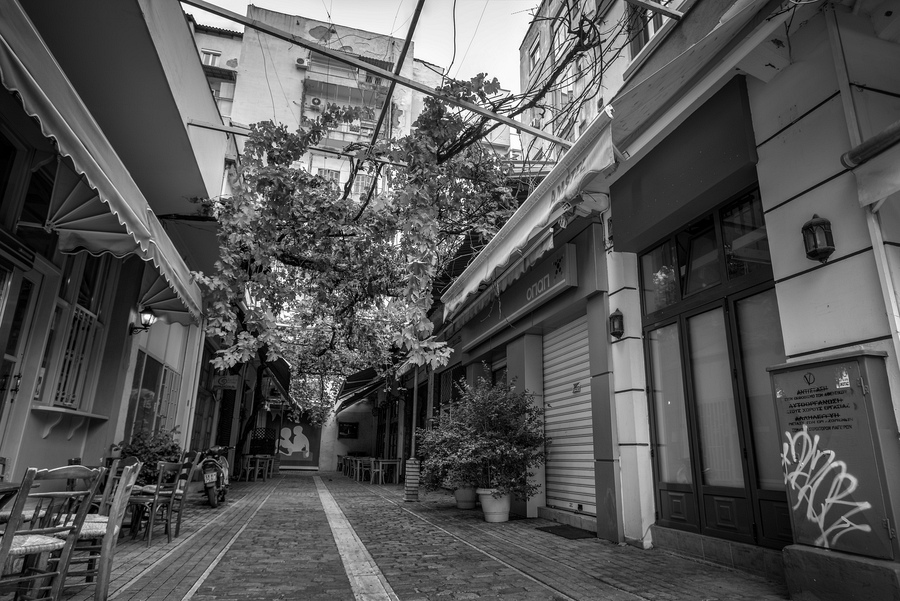 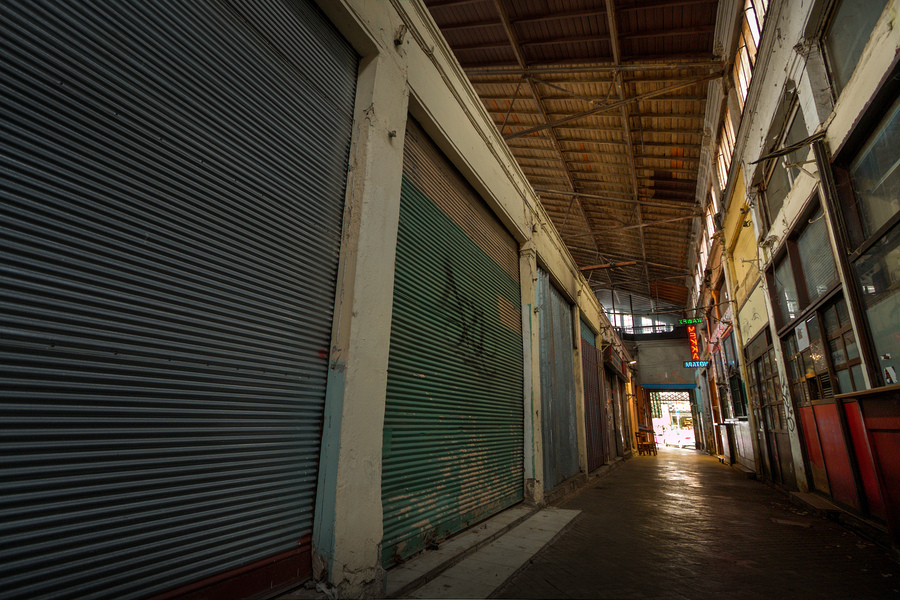 Signs of the times. Semi-discarded “higher end” produce market. Only a small fraction of the 140+ stalls are occupied. 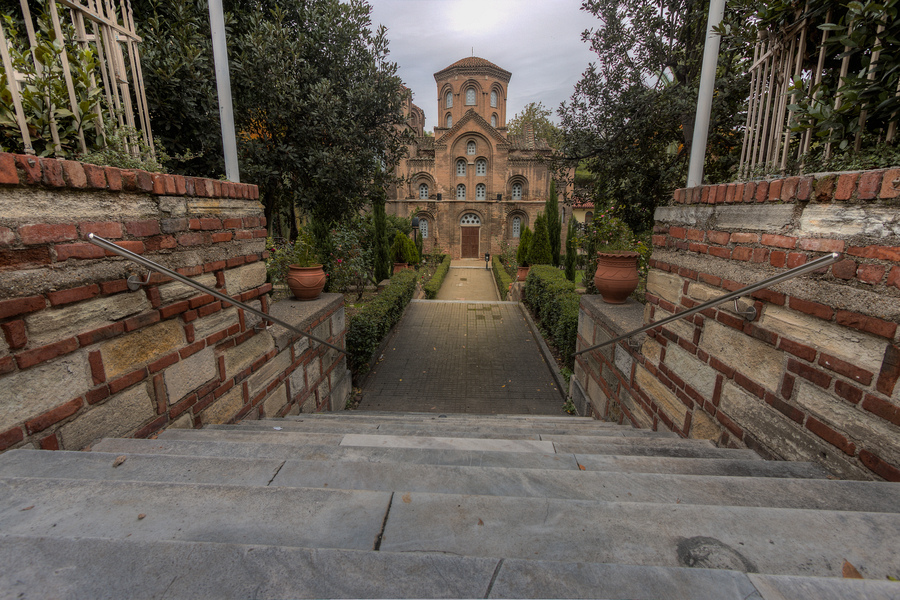 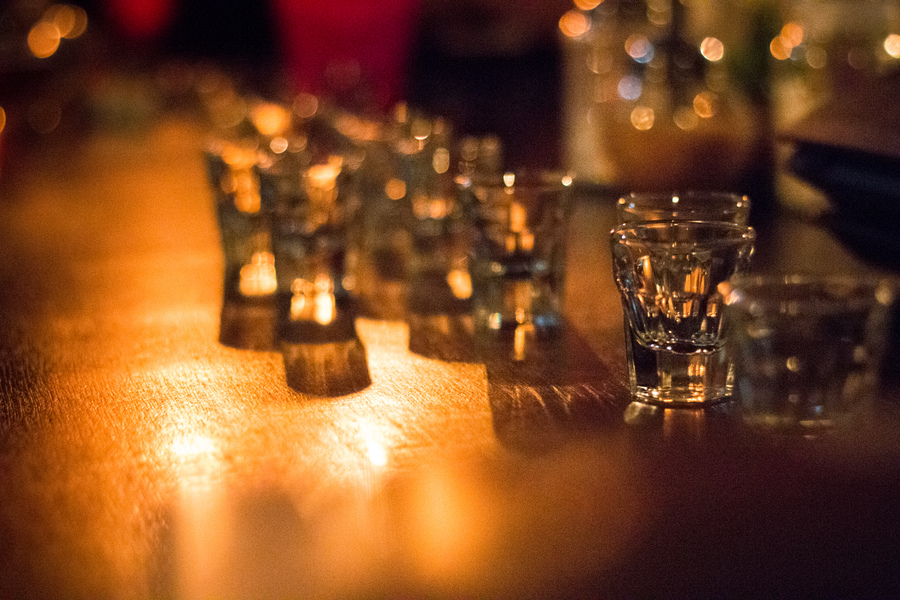 When the sun goes down the city really wakes up. Dozens of bars are spotted around Valaoritou bars' district. I briefly visited Gambrinus bar, a local favourite. 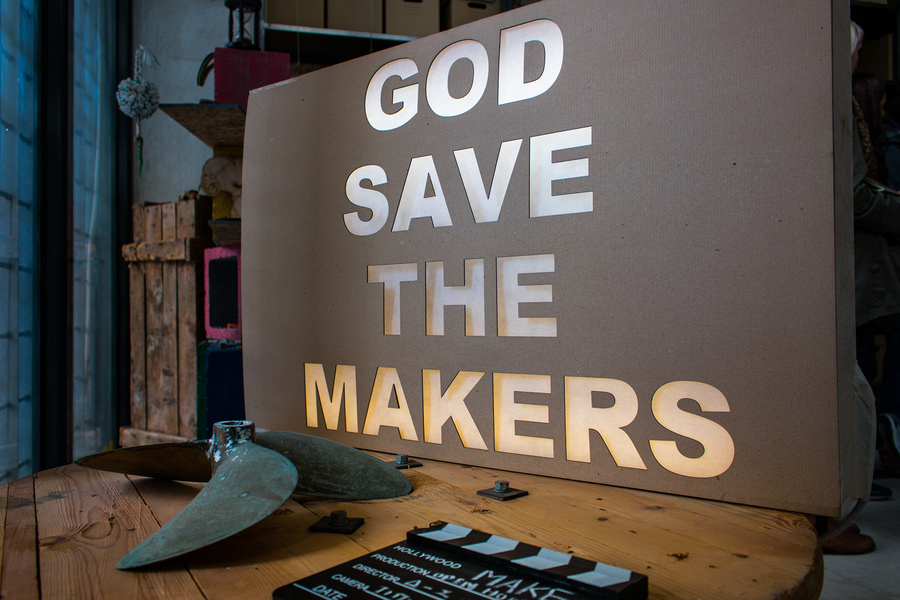 The first innovation hub in the city designed to equip inspired individuals and entrepreneurs. A fascinating concept. 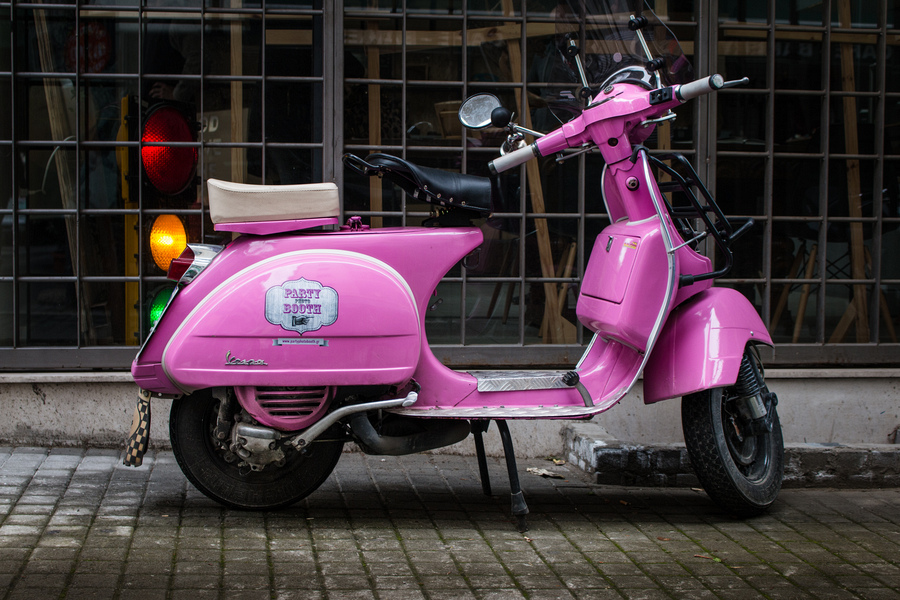 Bright and bold. A description that quintessentially encapsulates this scene as well as the city itself. 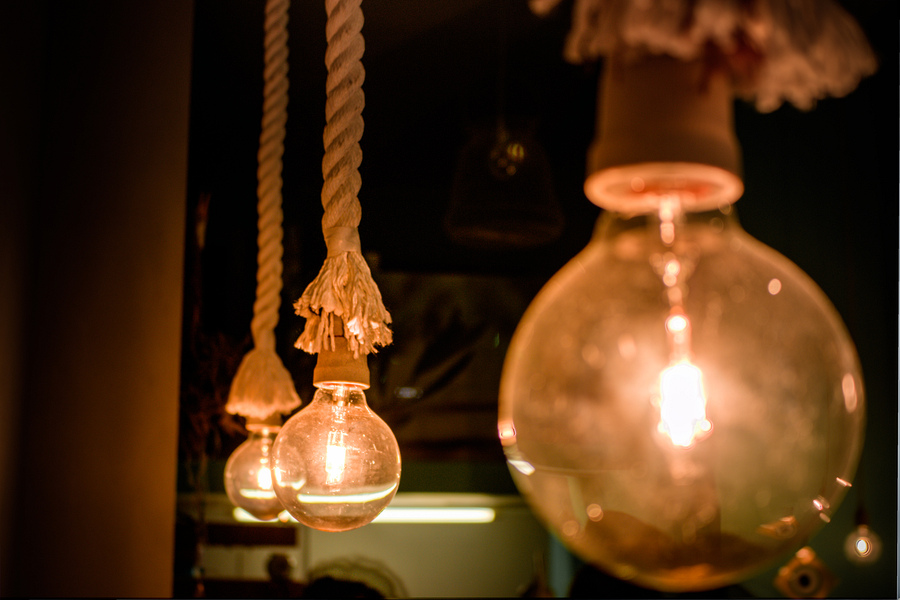 And there was light. Large retro bulb in “Olive”, an aptly named store selling olive oil. 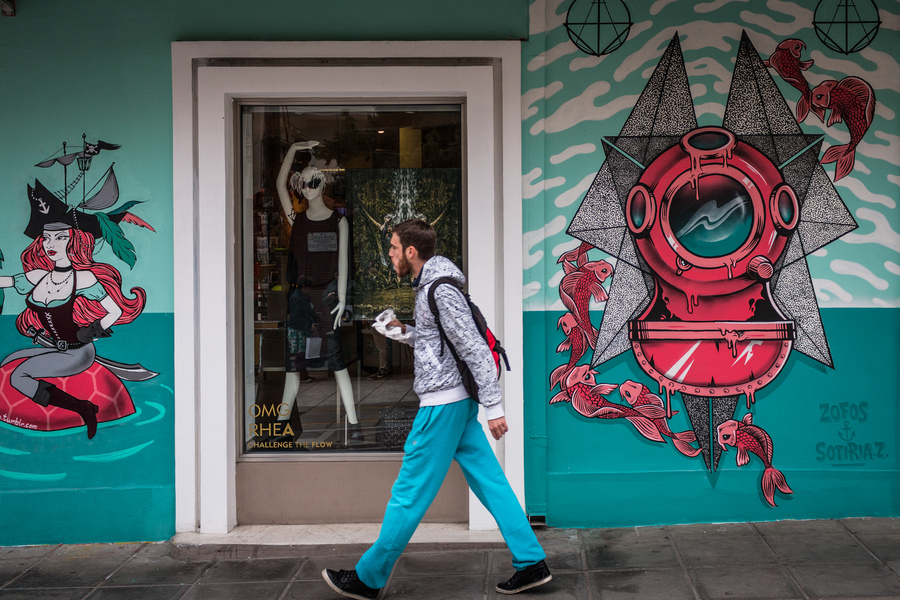 Street art that brightens up your day. 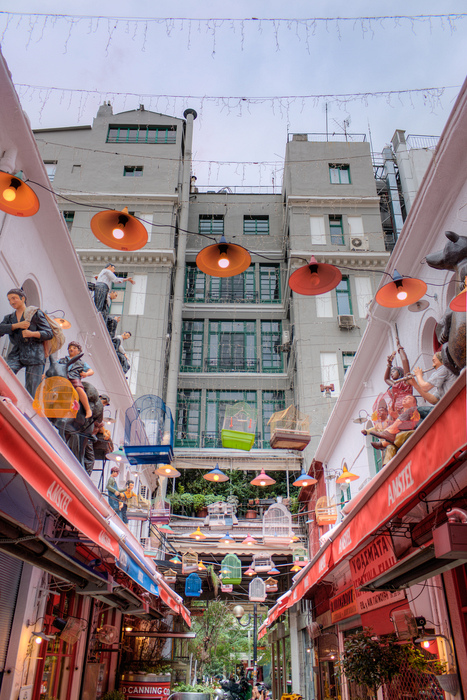 Notice the characters setup above the awnings on each side. These represent the characters that traditionally frequented the area in the 19th and 20th centuries. 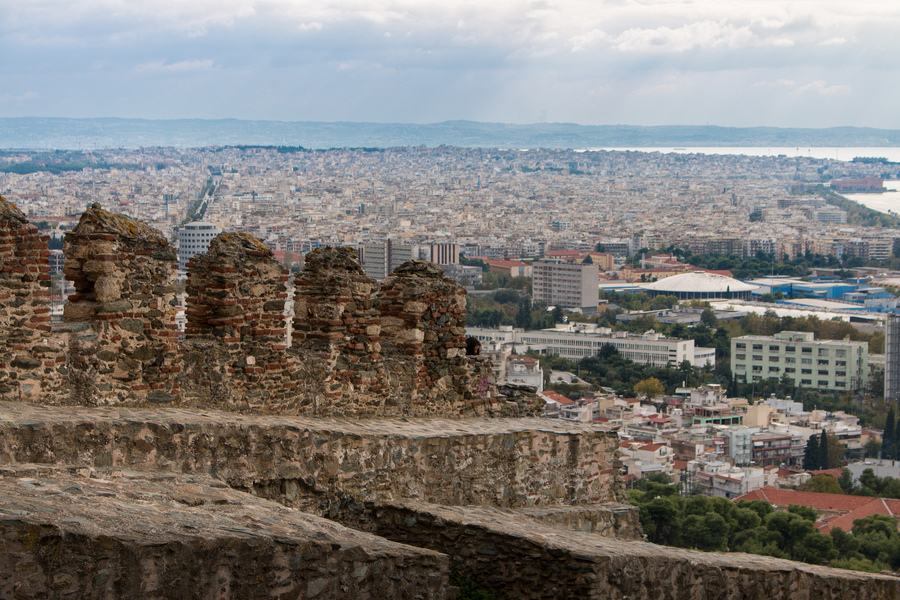 Near the outer walls that protected the city for centuries. 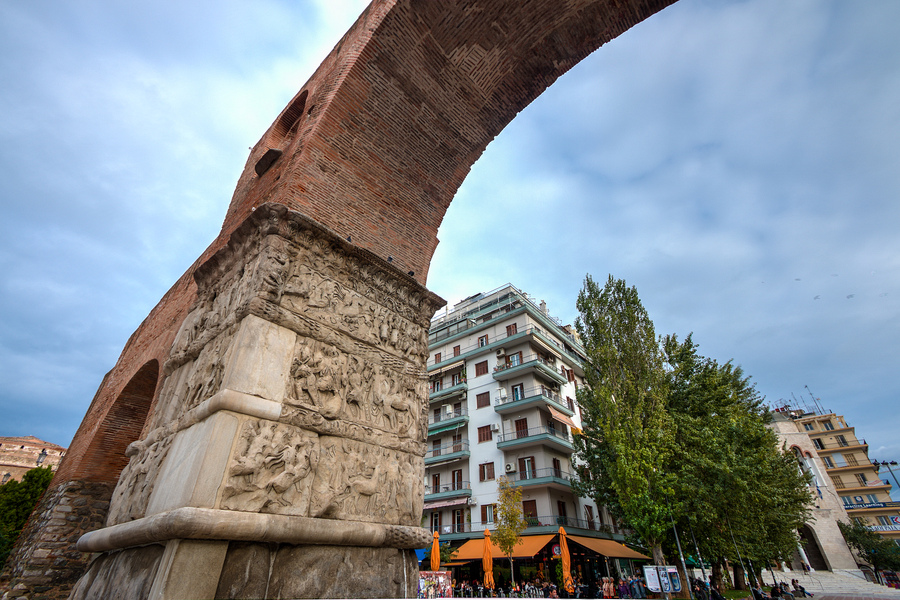 The carvings around the base of the arch depict fascinating stories, some of which are completely fictitious and were created for propaganda purposes. 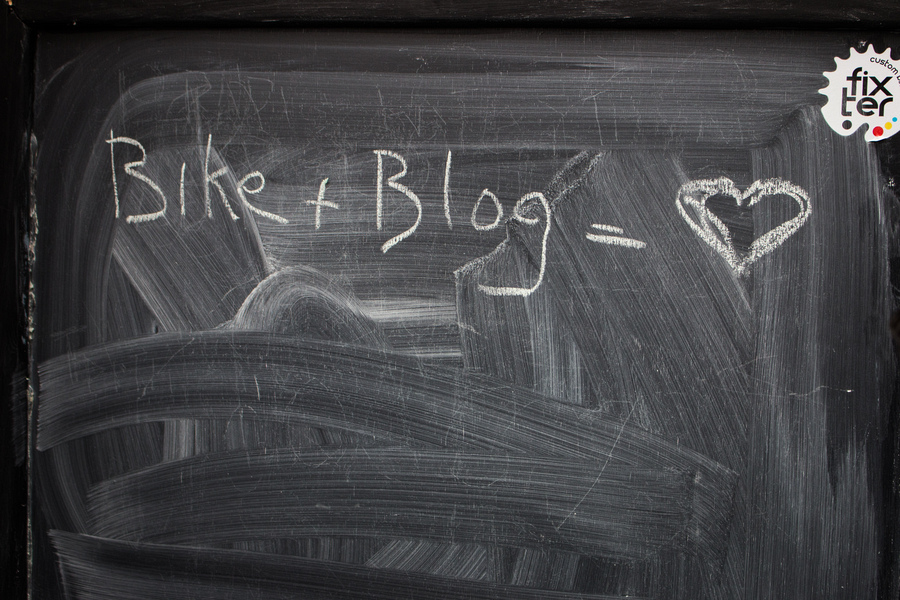 The maths seemed so sound. 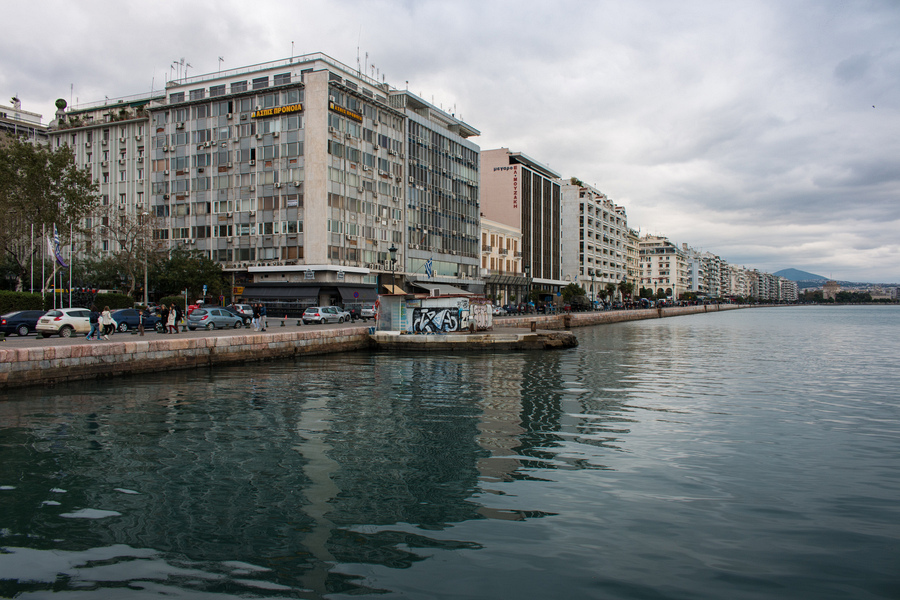 Boardwalk along the waterfront of Thessaloniki. 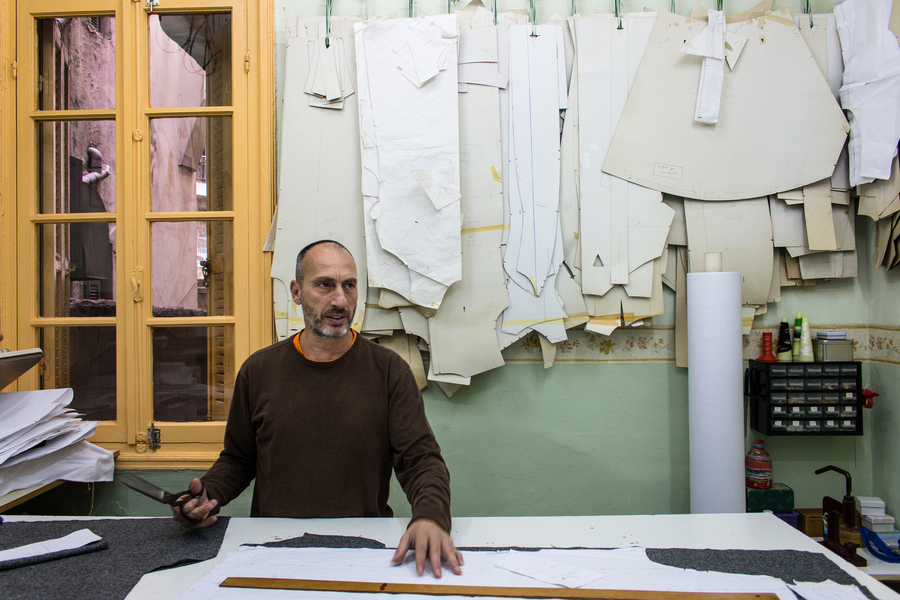 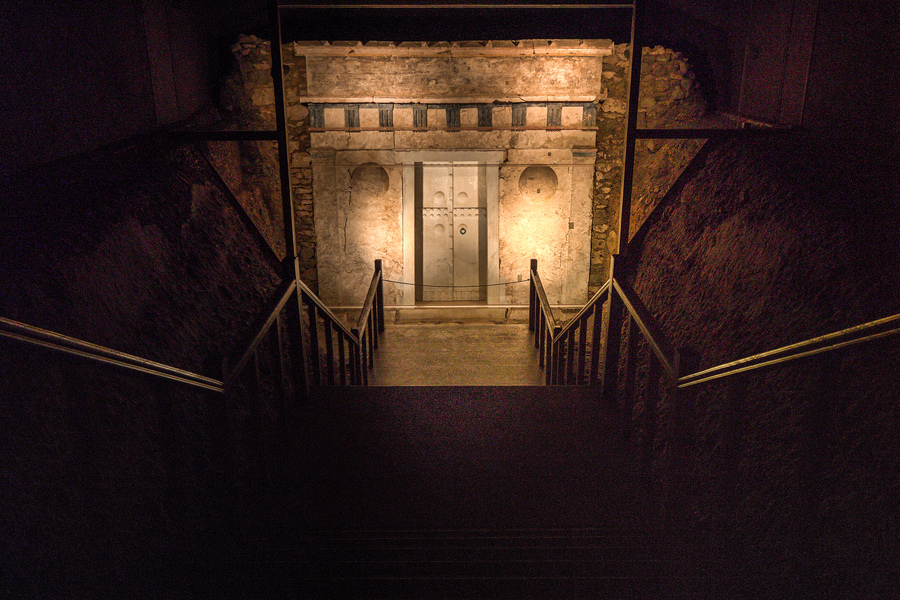 Royal tomb that belonged to Macedonian royalty, most likely the son of Alexander The Great. 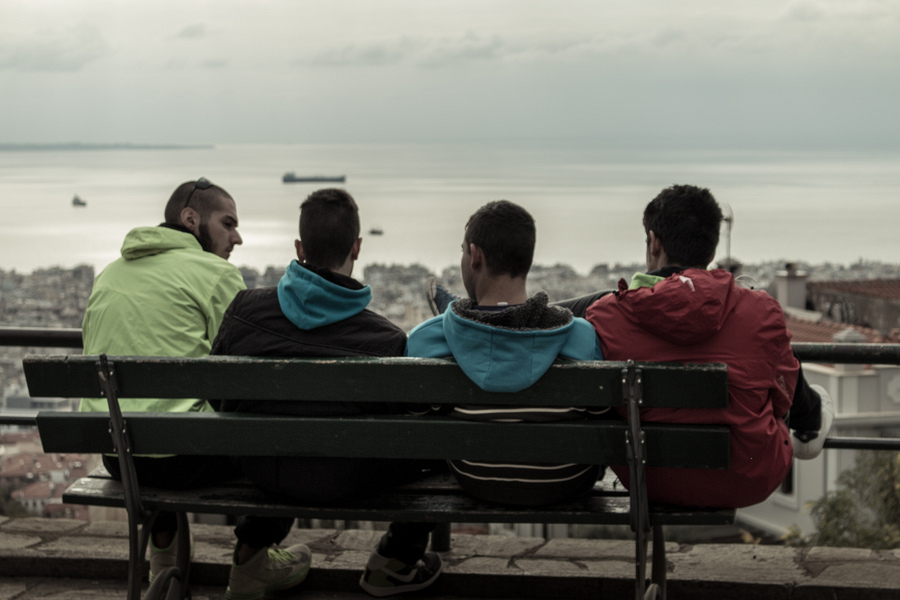 Always time for a chat with friends.

"I respond to every comment by private email. So please leave me comments, I love chatting to you" - Josh Bender
Posted by J-Crew on Nov 2nd, 2014
Incredible photos especially the one of the Ancient Roman arch. Do you have more in Greece? We were just in Greece recently too: http://battlemountain.co/
Posted by Anna on Nov 3rd, 2014
love your photos from Thessaloniki! I agree it should be a tourist destination not only because of the history and monuments but because of its proximity to Vergina where the tomb of Phillip II father of Alexander the Great was found but also Chalkidiki, which is a wonderful vacation destination!
Posted by Kerwin on Nov 4th, 2014
Hi Erin,

Beautiful pictures and very rich colors.
I did not make it there on this trip, but have to go back of course...
Posted by Steph | A Nerd at Large on Nov 4th, 2014
Incredible images, Josh! You really captured the essence of Thessaloniki.
Posted by Tom Bartel on Nov 5th, 2014
Some very nice shots here. Thessaloniki was a bit of a mystery photographically to me. You solved ti.
Posted by Erisadesu on Aug 29th, 2015
Thank you for visiting Thessaloniki your photos are great but a little bit empty...you potrayed a very nice cloudy Thessaloniki. during winter Thessaloniki is more beautifull on rainy days. Anyway Thank you for visiting our city once more. My only Tip is that all tourists before their visit our city should make a diet, cause Thessaloniki's food is the best in Greece.
Thank you once more.
Posted by Damian on Nov 27th, 2015
Thank you so much for this very interesting and beautiful post ! Do you have any plans to do the same for Athens, Attica? Thanks again!
Posted by George on Aug 31st, 2016
Perfect pictures. Greetings from Thessaloniki. Keep traveling
Posted by Ray on Nov 30th, 2017
Thanks for the great pictures of Thessaloniki. A significant fact, not evident from pictures, is the majority sephardic jewish population of Thessaloniki for hundreds of years. Invited from Iberia by the Turkish Sultan in 1493, the sephardic jews became a significant part to the history of the city, unfortunately wiped out by the Nazis. I have covered the fascinating history of the city in seven you-tube presentations at: https://www.youtube.com/playlist?list=PLckhtk7WxsVY_FYMlJxt3ik_ZsJ8rFhZA
Posted by Antonio on Mar 3rd, 2020
Thanks for sharing! Thessaloniki is probably the most beautiful city in Greece. It is well worth hiring a car as there is such a lot to do and see. It will give you the time to do things at your own pace