Did you know that Athens is one of the world’s oldest cities with recorded history dating back to over 3,400 years? That alone was enough to entice me to visit Athens. 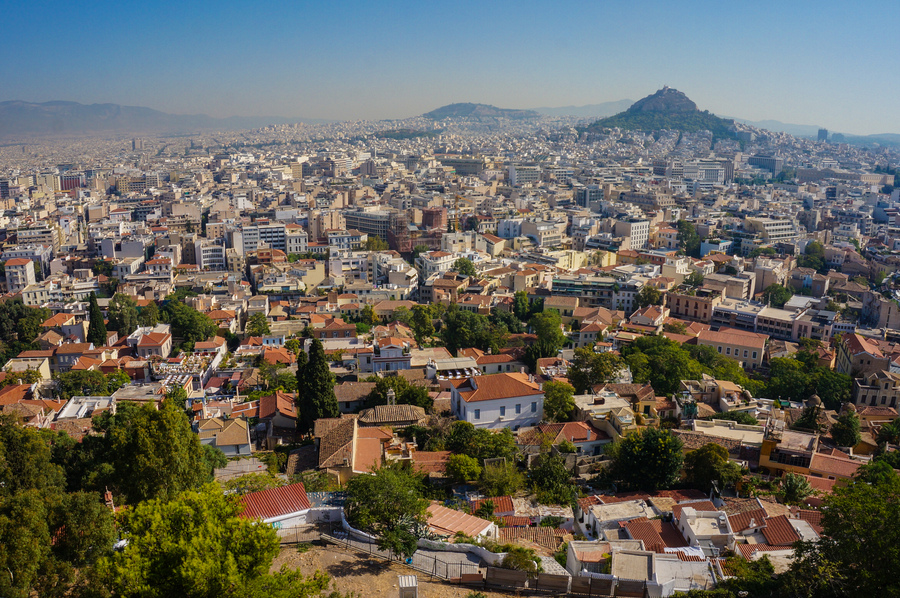 A Little Bit About Athens

Athens, capital city of Greece, is the birth place of some of the world’s greatest eras of art, learning and philosophy. It is widely regarded as the ‘cradle of Western civilization’.

With a population of over 800,000 within its 39km2, Athensis the 4th most populous capital city in continental Europe. It’s as crowded and busy now as it was two thousand years ago. 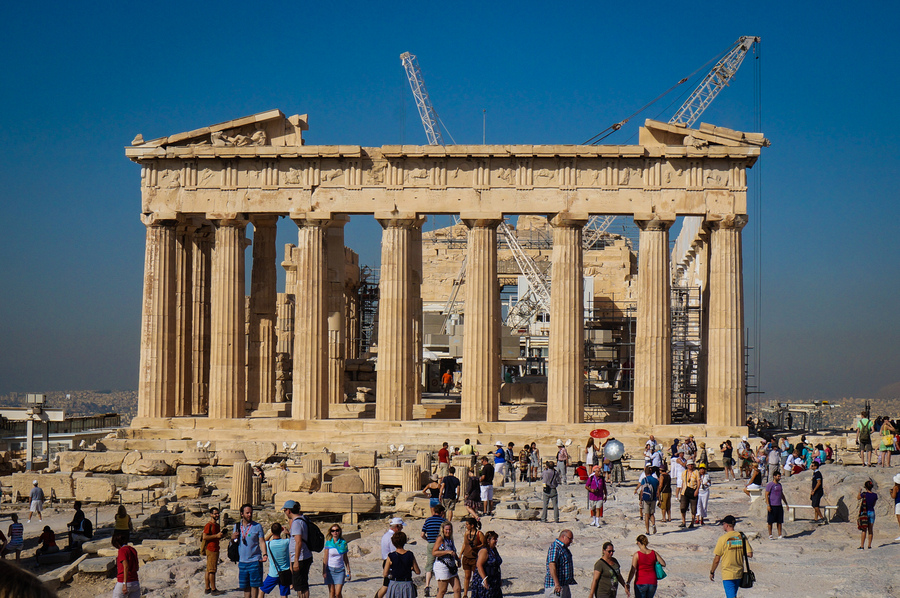 Reaching Athens seemed to be harder then getting around it. At the moment relatively few countries offer daily direct flights to Athens, or if they do, it is only the odd one here or there. In order to get from Malta to Athens, which is geographically very close, I had to fly 2.5 hours to Munich and then south another 2.5 hours to Athens. There was one direct flight leaving from Malta on Friday which took a little more than one hour.

There, of course, is a long ferry ride from Italy as a possibility. And while international trains were cancelled in 2011 after running for over 100 years, the train lines recently returned this year and you can now get in from Sofia or Belgrade via rail. 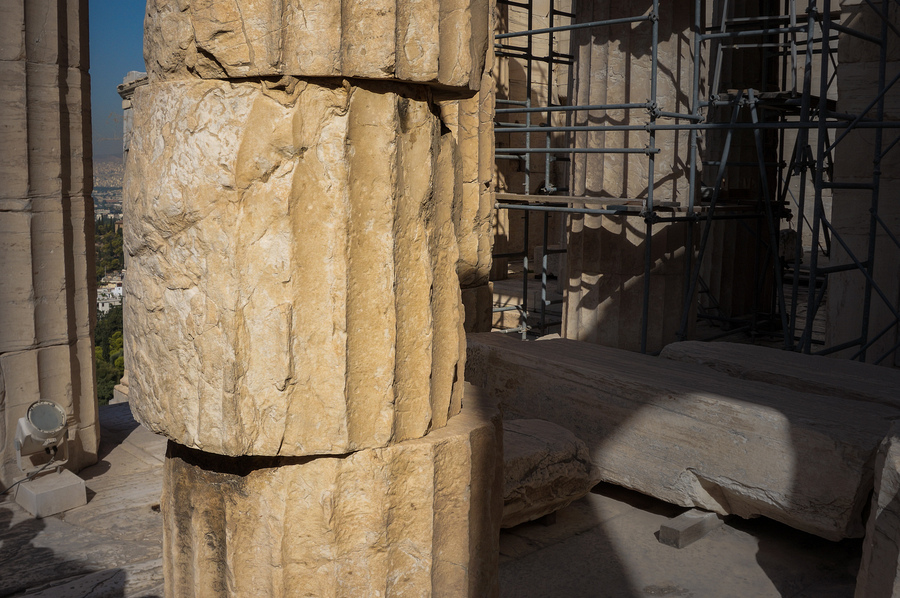 The train system within Athens is extensive and easy to use. When I arrived and found a taxi to the city was going to cost me over €50, I decided to make my way in by train. Josh and the kids were coming to Athens a little later, and since I was by myself I was feeling quite adventurous.

The train station was directly opposite the airport and cost me around €13 to the city centre. Once I reached Syntagma, I took a taxi to my hotel for €10 – saving over 50% compared to taking the taxi all the way. That’s a few extra gyros!

We used the trains both times we were in Athens, before and after our Greek Island experience, and they ran on time for us. A train ticket including a change of lines was €1.40 euros each (AUD$2), kids were free. If you only needed the one line then it was cheaper (at €1.20), but if you wanted to go further, say to the port, it was the higher price.

We stayed at several places in Athens.

Our first choice was Hotel Platon, located on the Faliro coast, 3.5 km from the port of Piraeus and 7.5 km from the centre of Athens. It was an easy walk across the road to the train station which could take us direct to the city or direct to the port. 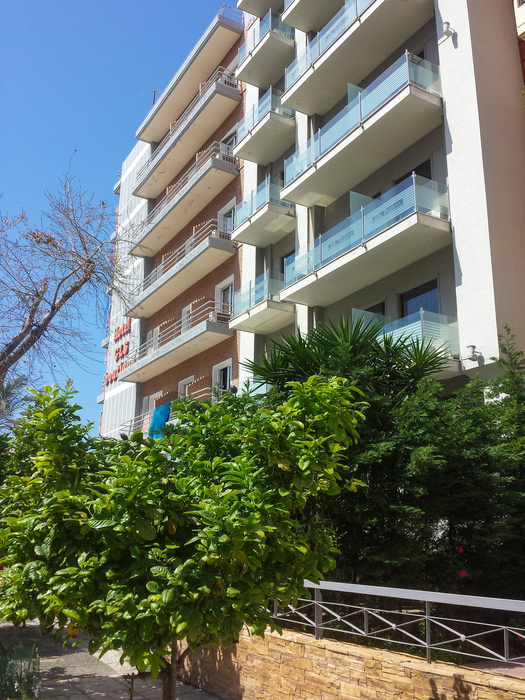 Hotel Platon is a friendly family-owned hotel, compact and quiet but with a modern frontage. The lift was petite, fitting no more then 1 adult and 2 kids. We had 2 double rooms next to each other on the 2nd floor. As like most hotels in Athens, smoking is allowed indoors, however if the hotel room door remained shut, the smoke in the hallway did not waft into the room.

It was very basic and would be a great choice for budget travellers, setting you back less than €35 per night. Ideal for a night’s stay if you are just looking for a place to sleep. The included breakfast was a generous home made tray of toast, cereal, juice, eggs and cake. Yep, cake for breakfast! The kids loved that.

Stay here if: You need a cheap room close to the port and/or city.

Tip: Leave your door closed to avoid hallway smoke getting into the room.

After our Greek island trip we stayed at the Oscars Hotel. This hotel was more centrally located by the Larissis Railway Station, just 2 stops from Syntagma. Notably, there was a rooftop pool with views of the Acropolis and sprawling metropolis. Across the road was a large supermarket where we bought dinner one evening to eat on the rooftop. A buffet breakfast was included which had some room for improvement and fell short of the high standard of Greek hospitality we experienced at Platon. 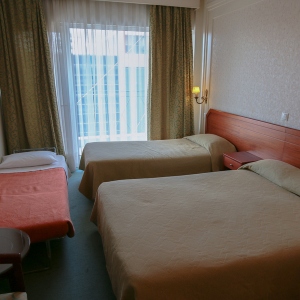 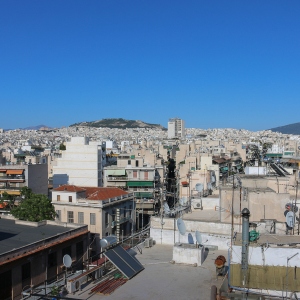 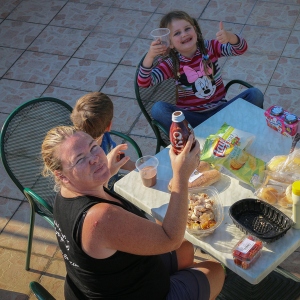 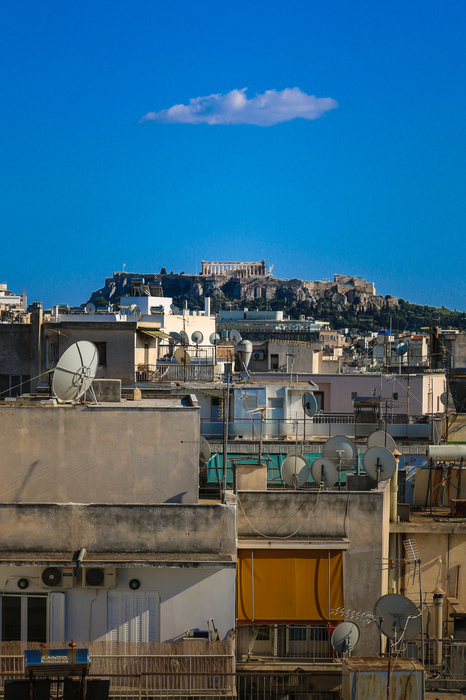 This hotel is well suited for business people and tour groups. Prices are low and typically will cost less than €45 per night.

Stay here if: You want to be close to the city.

Tip: Eat a supermarket lunch or dinner on the rooftop for a cheap meal option with delightful views.

The night we were due to leave Athens we had booked a hotel close to the airport since we had to be there at 2am. On our way to that hotel our taxi driver revealed that it was nowhere near the airport and that he could take us to one much closer. We conceded to his advice and he dropped us off at Hotel Pantheon.

Located in the town of Markopoulo just 15 minutes south of the airport, the hotel provided a room that was basic, yet comfortable, with a king bed and a single bed. The kids were tired and quickly fell asleep, sleeping top-to-toe in the single bed for the few precious hours before our flight.

Hotel Pantheon was a simple and cosy hotel with a great location for transiting, and a very reasonable price of less then €40 per night. The lady at the front desk was lovely. She knew we were to leave early and upon check-in gave each of us a bottle of water and a croissant.

Stay here if: You want to be close to the airport.

Tip: Bring your own food, we did not notice any restaurants within walking distance from the hotel. We brought our leftover supermarket dinner from the previous day.

Things To Do In Athens

You may have already read our recent post about our top 5 favourite things to do in Athens. The hop-on-hop-off bus was a convenient way to see the city sites, including the Acropolis, although my husband was miffed that the scaffolding and cranes spoilt his picturesque photos. 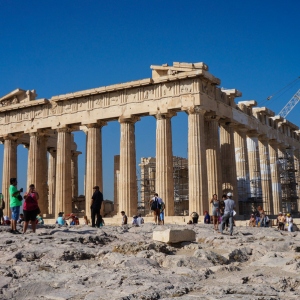 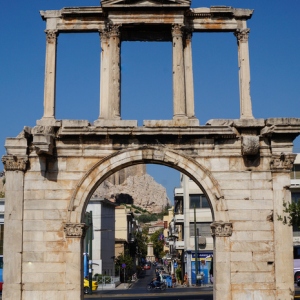 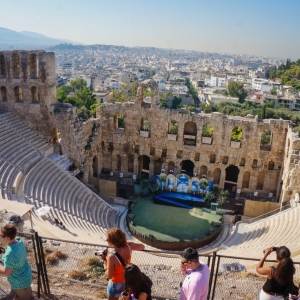 Perhaps more impressive is the historical centre which has banished cars creating Europe’s longest pedestrian promenade. I really enjoyed the walk from Syntagma to Monastiraki Square with its street performers, break-dancers and 60-cent donuts the size of Josh’s head. 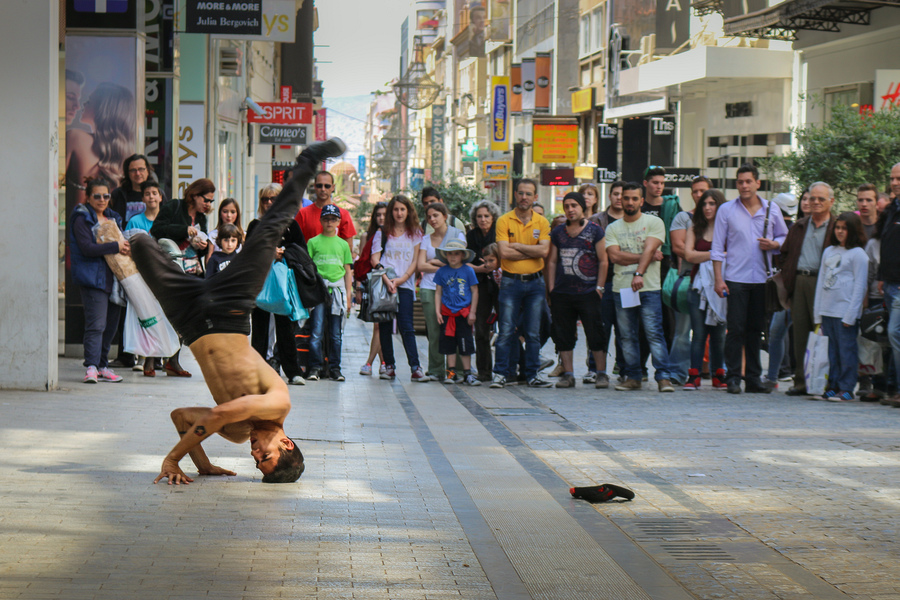 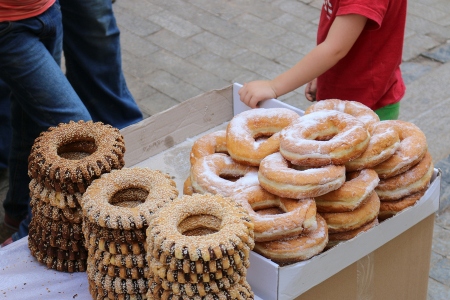 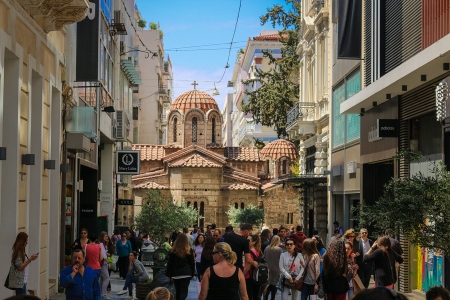 If we had more time I would have liked to take a local guided tour of Athens to find the hidden jewels. Despite its UNESCO sites and ancient charisma, it is still a vast city complete with litter, graffiti and swarms of people.

There are so many restaurants to choose from in Athens. I had my first real Greek salad at a small local restaurant, just a few blocks from Hotel Platon, which was absolutely divine. The gyros we found at the hole-in-the-wall mum-and-pop eatery were amazing too. You can read all about Greek food in our other blog posts – we did lots of them! 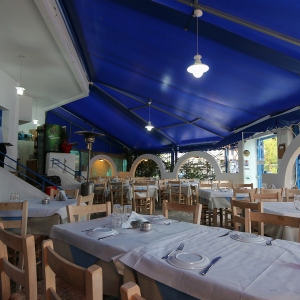 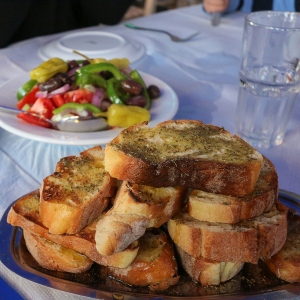 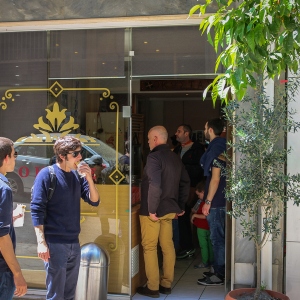 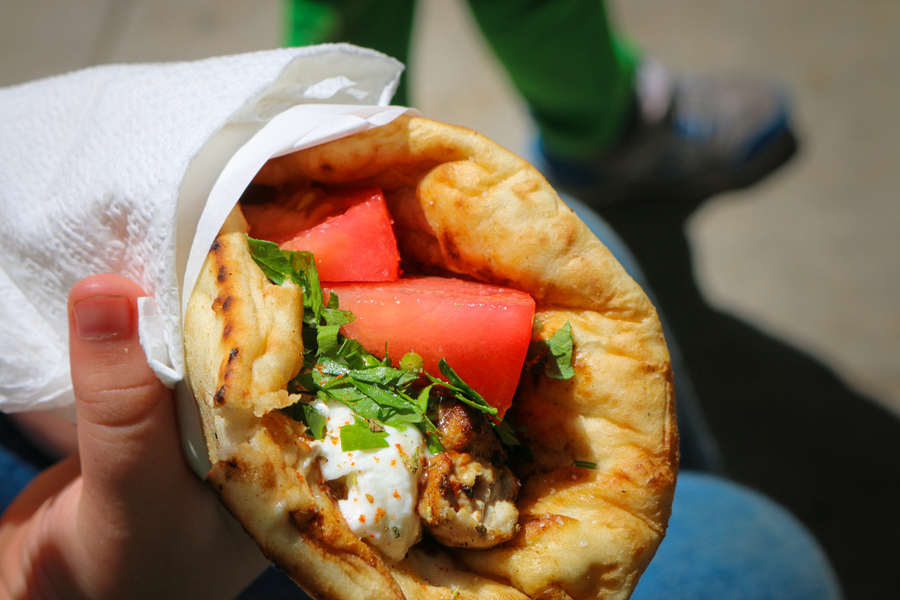 Most important to note is that the Greeks often enjoy a long siesta, so you may need to adjust your eating schedule. Heading to a restaurant at 6pm with kids is fine, but it will be fairly empty, so don’t be concerned. The Greeks usually eat lunch about 3pm, after kids are home from school, and then dinner after 9pm. It took a while to adjust and we were quite happy to get back to our regular 12pm and 6pm eating schedule once we departed.

In many ways Athens remains a city of contradictions and contrasts -ancient architecture along side luxury brand outlets, traditional markets next to modern air-conditioned shopping malls. It seems the city has struggled to find that precise balance between its zenith in ancient history and it’s place in today’s modern world, particularly in the wake of the 2004 Olympics spotlight and aftermath of the Global Financial Crisis.

However, progress is being made – it’s visible and tangible. I look forward to witnessing the staggered missteps of the past transform into a confident stride in the future, as the current momentum flourishes this unique city into it’s full potential.