Don't Visit New Orleans Without Eating At These Ten Restaurants

When one thinks of New Orleans, food is up there as a reason to visit. And while I was excited to be seeing our friends again, my husband only had one thing on his mind, food. After studying Man Vs Food he was ready to take on New Orleans’ culinary scene.

A cultural gumbo and a jambalaya of cuisines, New Orleans has to be one of the most favourite places we have ever enjoyed the culinary arts.

Here’s some of the top ten places we ate at:

Could be one of my favourite meals in New Orleans and one of the cheapest too. You can’t eat inside with the kids as they have slot machines, but the tables outside sit under fans and once our ice-cold water was served the heat was manageable. Josh, of course, had a po-boy with gumbo, while I tried a South West taco/springroll adaptation. Both were absolutely delicious, as was Mia’s chicken tenders and Cajun seasoned fries.  3 meals set us back only $30. 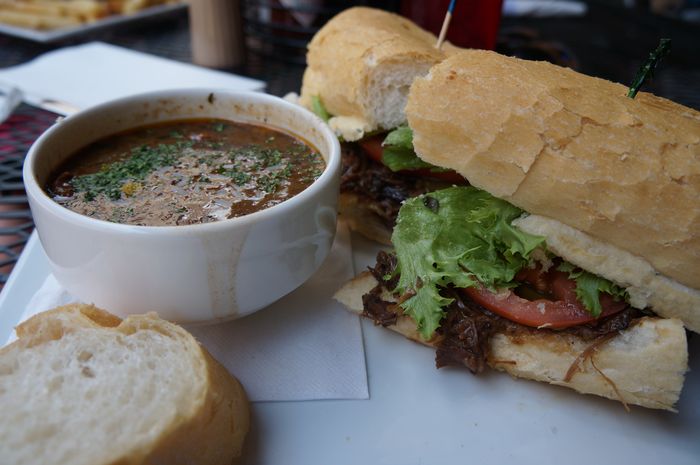 Our goodbye breakfast with our good friends that we had met in Belize. The breakfast was average to be honest, I had hashbrown and scrambled eggs, my husband had French toast. It came out on Styrofoam, which felt completely out of place in the beautiful gardens of outside the old café building.

But the beignets were delicious. This was our first taste and they did them complete justice. Hot, sugary and full of calories. It’s not a daily breakfast, but man I wish it could be.

Beignet’s are a French donut served hot and covered in sugar powder. They usually come in a set of 3 for roughly $4. 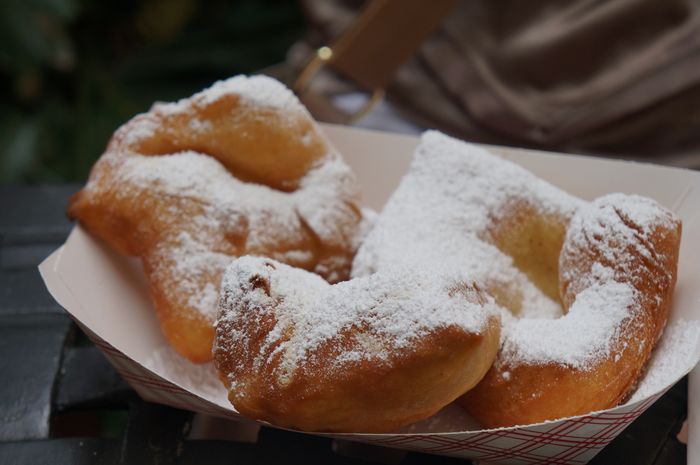 Similarly to Café Beignet, this spot is famous for it’s beignets and dates back to 1862. The beignets are cheaper here about $2.99 for 3, but they are smaller. They had a lot more sugar powder on them, which we thoroughly enjoyed. Blowing powered sugar in each other’s faces is the tradition for newly engaged couples and we did the same. The line is usually huge on a weekend, so try a weekday. 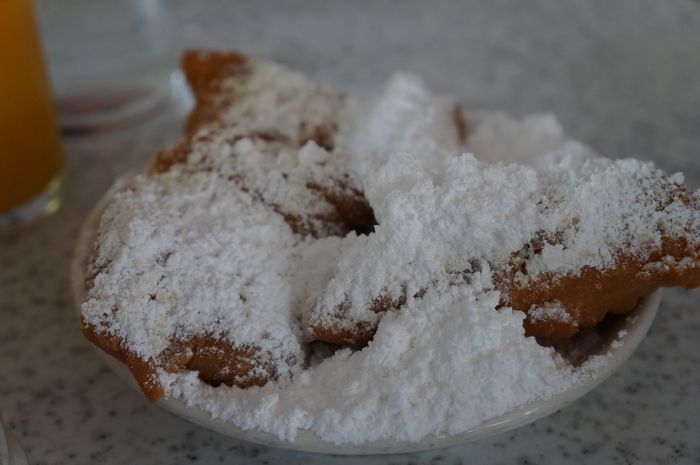 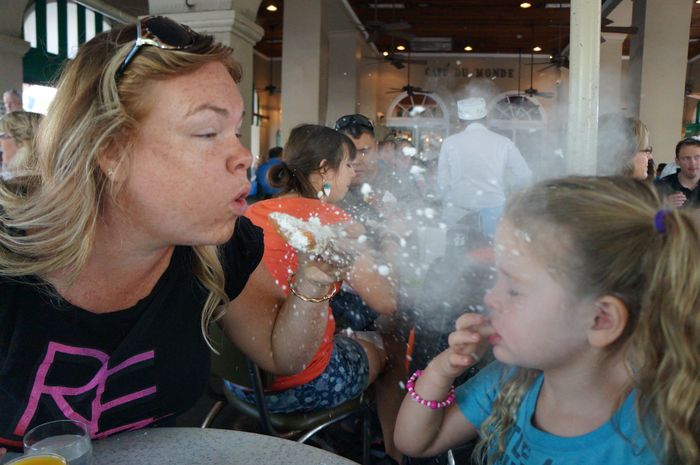 This place is similar to the famous Katz’s Deli in New York. You walk in, stand in line with a menu, order and then they bring it to your table.

We had generously been provided a booking by New Orleans Visitors Bureau and thus were seated in one of the three dining rooms.

The food was excellent NOLA cuisine. The “debris” of Josh’s sandwich is made from juices captured from roasting meats over 18 hours. It’s meat lovers paradise. I won’t even attempt to describe it, check out the video we filmed. Josh successfully finished his Ferdi Poboy, while Dawn barely managed half. 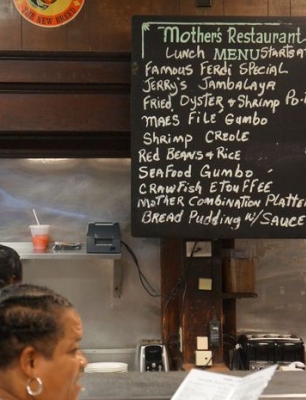 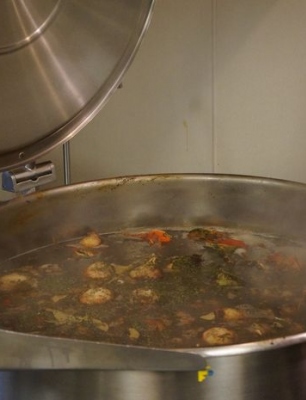 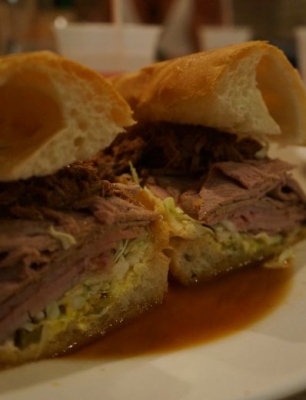 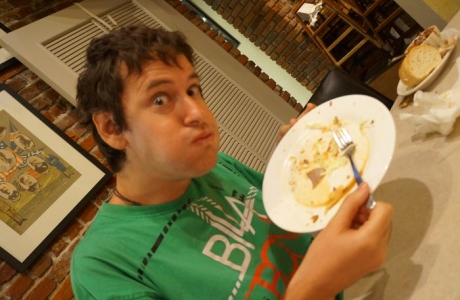 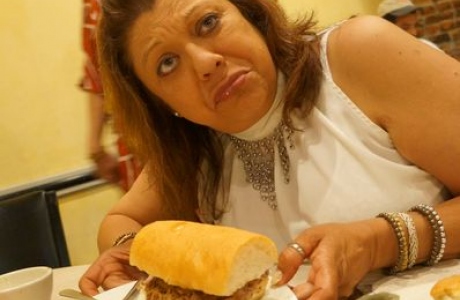 If the famous Muffuletta doesn’t pull you in then the $1 strawberry daiquiris will which are delicious and priced perfectly. This place dates back more than 40 years and specializes in Cajun & Creole classics.

Josh and I shared this monster sandwich - thank goodness. It comes with several meats – ham, salami, pastrami piled high on an Italian roll and topped with melted Swiss cheese, their famous olive salad and served with French fries for US$9. 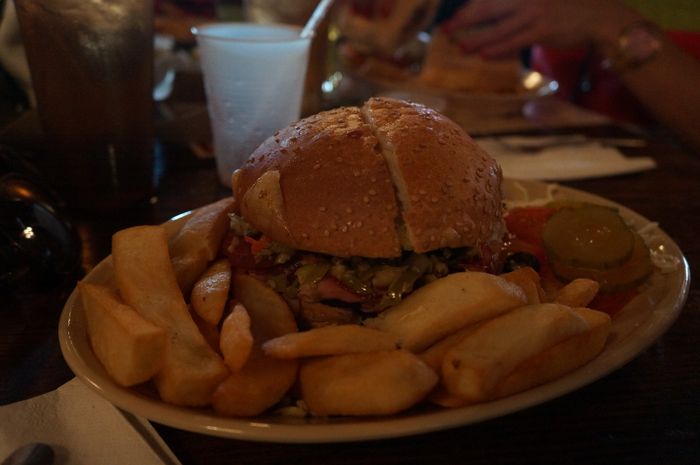 The famous Acme always has a line for their oysters, however we decided Felix’s line looked more manageable. So across the road from Acme we waited a few minutes to get into Felix. A little run down, noisy and very busy, Felix is great New Orleans food. I wasn’t a fan of the jambalaya, but he po-boys and crab claws were delicious.

The service was average, but it’s quite an authentic NOLA experience. 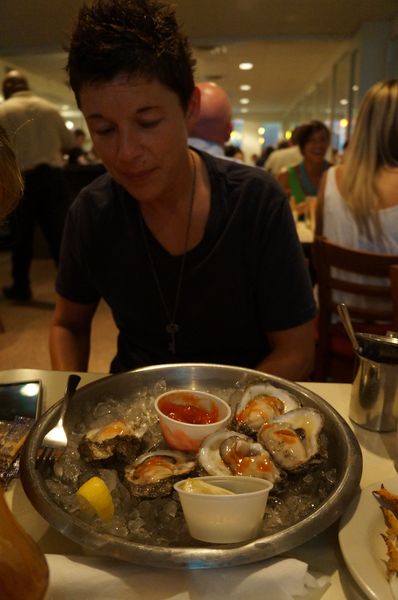 An Italian restaurant on Esplanade Ave, down the road from where we were staying at The Esplanade at City Park. The servings were huge and delicious. Roasted olives, delicious pizza and enough for dinner the next night as well.

Service was also nice and there were often other kids at the restaurant, which gave our kids a chance to play and made supervision less a chore. 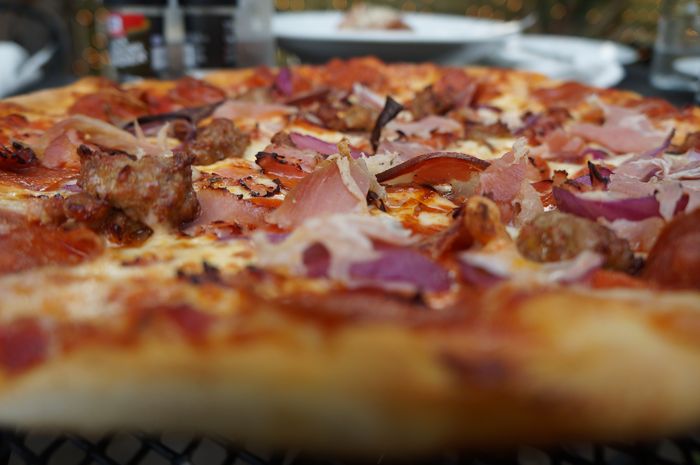 We decide to have lunch here one day since we were in the area. Again servings are huge, we should have shared, however I enjoyed my Gyro Greek Salad for dinner as well as lunch. It was delicious and more a deconstructed gyro than a salad, but completely yummy. Josh had the roast beef po-boy and the kids shared a grilled cheese sandwich.

Weirdly they offer crisps as a side unless you wish to pay extra for fries. Also be aware an 18% gratuity is added to the bill automatically (not optional). 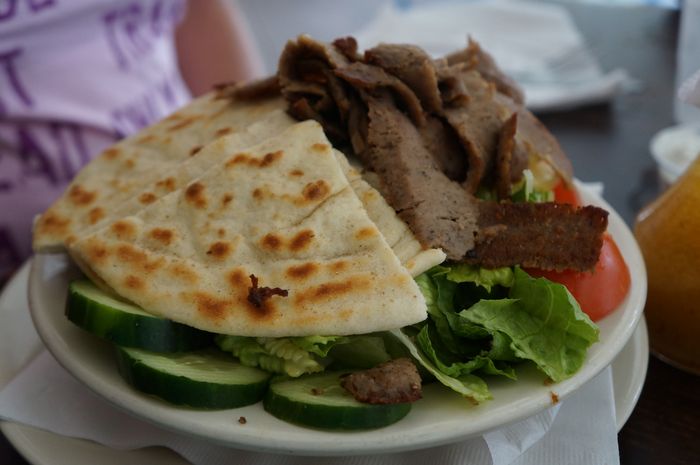 Found near the dock where Steamboat Natchez is situated, this place had mixed reviews on TripAdvisor, but it was our last night in New Orleans and I still hadn’t had gumbo. I ordered the chicken and sausage and it was fabulous, lip-smacking good. My husband had a great veal po-boy while the kids ate all their rice and beans. We all shared the famous bananas foster pie afterwards, which was an ok version of banoffee pie in my view. 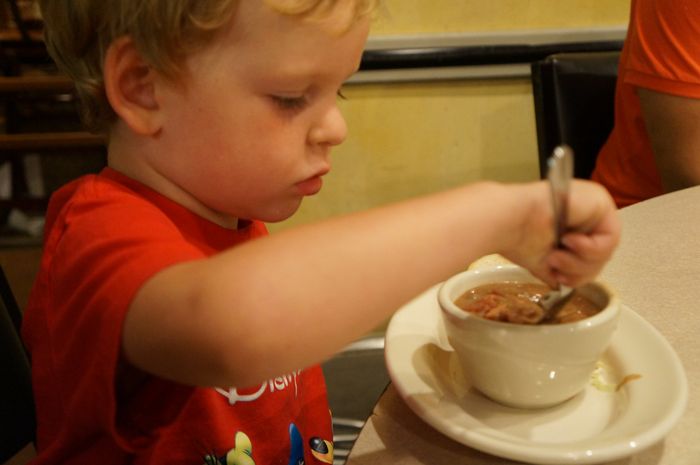 This place was started in 1963 and is known to locals for its burgers. While they were quite fine, they didn’t provide a “spiritual experience” that a reviewer on TripAdvisor claimed they would. However, they did come with a massive spud topped with chives, sour cream and bacon for a very reasonable price. That was yum. 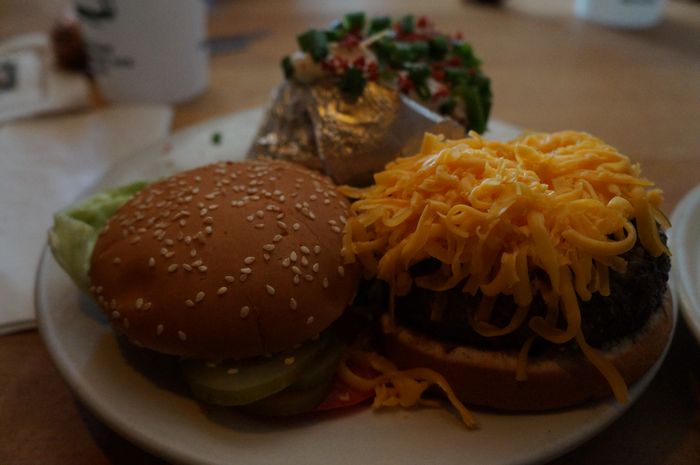 There must have been so many places we missed, I wanted to eat forever, but I think my waistline was glad we didn’t stay any longer than 2 weeks. Next time you visit New Orleans make sure you save up some calories so you can take advantage of the wonderful cuisine and see why the Big Easy has such a convincing reputation for it’s food.

Now you've got the food... What should you do in New Orleans other than eat?

"I respond to every comment by private email. So please leave me comments, I love chatting to you" - Josh Bender
Posted by Tonya {The Traveling Praters} on Jun 10th, 2013
There are so many great places to eat in New Orleans! I read your post and my mouth started watering for beignets all over again.
Posted by Karin on Jun 11th, 2013
Wow such large portions but looks yummy
Posted by Kimmy @ AfterGlobe on Jun 11th, 2013
We are going to New Orleans next year and will for sure be referencing back to this post for ideas on there to eat. All of it looks so tasty!
Posted by Donna on Jun 11th, 2013
For me Coop's is a must. Sometimes three or four times per visit! :) And the muffaletta at Central Grocery and the pralines at Loretta's and too many more to name them all!
Posted by Angelle Tibbets on Jun 11th, 2013
The french onion soup at Maspero's is to die for! Muffaletta at central Grocery
Posted by Jess @ icecreamandpermafrost on Jun 13th, 2013
I think what I miss most about living in New Orleans is the food. The hardest part of eating at Cafe Du Monde was always trying not to breathe too hard. No matter how careful I was, the powdered sugar still went flying.
Posted by Curtis on Jun 18th, 2013
Hello:

All so fattening and all so good! New Orleans does have flavor. We will try to stop in to one of these places when we are back that way.

Curtis
www.thewildsmithberrys.com
Posted by elaineschoch on Jun 19th, 2013
Port O'Call and Mothers are two of my favorite New Orleans spots. Delish!!!
-Elaine @ http://CarpeTravel.com
Posted by Mishele Newkirk-Smith on Jun 27th, 2013
I grew up an hour east of 'Nawlins' (native pronunciation) and your post brought back memories. The only N.O. staple I didn't see is King Cakes from Manny Randazzo (https://www.randazzokingcake.com/) during Mardi Gras. Thanks for bring back memories. I think I gain a few pounds just reading. :)

Mishele
www.thewildsmithberrys.com
Posted by BellaVidaLetty on Jul 29th, 2013
Thanks for this great list. Loving the photos.
Posted by Chanel @ La Viajera Morena on Aug 27th, 2013
I can't wait to get to NoLA and eat some delicious food! I love the picture of the woman blowing powder towards the little girl - adorable.
Posted by Mark DAntoni on Oct 20th, 2013
Erin, I ran across your posts about NOLA and read every one. Looks like you had a great time. I was born in New Orleans and seeing your photos really made me homesick. I can't wait to go back and bring Renee and Scout. The flavor of the Big Easy really came across in your posts. Glad you could make it there.
Posted by MikesRoadTrip on Jan 14th, 2015
I did go to a couple of the places you mentioned while I was in NOLA, but unfortunately I missed a few. I would have to say my two favorite places were Dominique's on Magazine and Tableau. I had shied away from New Orleans, but was so happy I finally made it there...simply a fantastic city! Here is an overview of my experience. http://www.mikesroadtrip.com/visit-new-orleans/