Leaving Las Vegas was a lot harder than getting in, which is surprising considering the amount of border crossing security we saw in San Diego. And I thought Australia was bad.

Our taxi dropped us off at the American Airlines gate and they have a valet system out the front that work on tips. Basically instead of going inside, queuing in the line, weighing the luggage, paying the luggage, getting your tickets this guy takes your bags then and there, issues your tickets and you are done. It took minutes and we gave him a $5 tip. He picked up each bag, weighed it with just his hands and said we’d be fine. 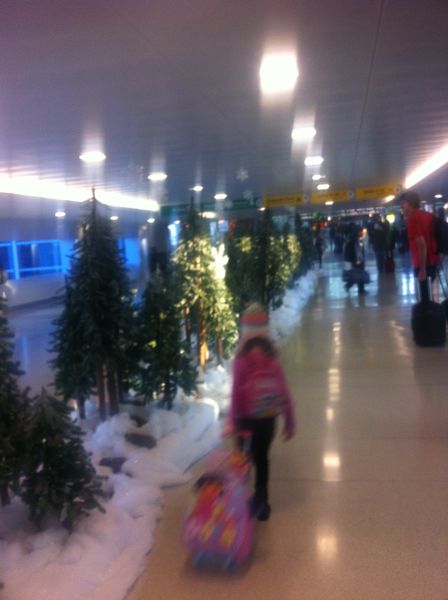 Phew. I hate that luggage weighing moment, holding my breath in anticipation.

It’s a fairly long walk to our gate & a super fast monorail as well. Kids love it and it’s quite high so you get a great view of the airport.

Security allowed us through the wheelchair access and little did we know just how hard things were going to get.

Australia – Shoes can stay on, belts come off.

SE Asia – Shoes and belts on.

USA – Shoes off, belts off, pants come off (no, just kidding). Kids do not have to take their shoes off, however Mia’s boots beeped and so she had to remove them to walk through the metal detector.

Australia – Water for kids is fine. But they had to look like kids bottles.

SE Asia – Water for kids is fine. Bangkok asked us to take a sip out of all bottles to prove it was nothing nasty, lol.

USA – Would not let us take water on at all. He kept saying it was only for bottles I said my son is a baby and needs water. We argued for a long time before I finally convinced them to let me take one on as my son had gastro and needed to keep his fluids up. The other 3 bottles were chucked. The bottle we were allowed to keep was tested. (Why couldn’t they test all of them?) On top of that he also confiscated our yoghurt… Josh realised on board he only confiscated one and was delighted to find the second one still in the bag, yum!

Australia – Laptops out, iPads no worries.

SE Asia – Laptops out, all in a box, sometimes.

USA – Laptops, iPads, iPhones, all out, all in separate boxes.

Australia – Pram was allowed to be pushed through.

Australia – Walk through scanner, get pat down & electronic wanded, get luggage checked (even though it’s just been through a scanner).

USA – Wanted us to go through one of those horrifying radiating body scanners where you get naked (virtually). Thankfully with kids we could just go through the scanner.

Finally once the fight with the water is over we are on our way again. There is a moving walkway with a big sign saying no strollers, which we ignore and walk along. I mean, for the city of sin there sure are a lot of rules at this airport. Really? I take my stroller on escalators; I don’t think a moving walkway is going to cause me any danger!

As we get to the gate they were already boarding so we walk through. A simple “they said I can keep the stroller,” was sufficient for the staff. Scored 6 seats again. Once seated, Josh fell asleep with Caius watching the iPad. Mia fell asleep while I write some blog posts and get to use Facebook for free.

During the flight when I opened my laptop it offered to connect me to Wi-Fi. I was thoroughly excited. It soon became apparent that Facebook is free, however they have an option to purchase Wi-Fi through gogo for any other website. Cost is:

We left our hotel about 7am, arrived about 7:15am at the airport and didn’t stop one second for our 8:20am flight. When leaving Vegas try getting there about 1.5 hours before internal flights, it took a lot longer to go through security and that huge airport than expected.

The flight to New York was fairly easy going and it is made with both excitement and trepidation. Excitement for my long time dream coming true – Christmas in New York, a white Christmas. Trepidation because I checked the weather report before we left and it is going to be 3.8°C on Christmas Day & nearly -2°C on Christmas night. We thought Vegas was chilly. However there is the promise of a snow shower – bring on the white Christmas! 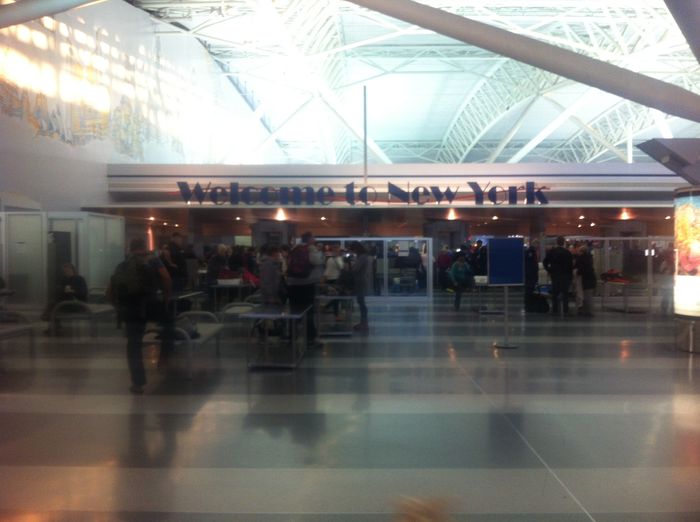 P.S. Don't forget if you are not a US citizen you need to have a valid visa to enter the US. For majority of the EU or Australian citizens, you can use the Visa Waiver Programme, called ESTA. You do not need to visit a local American embassy it is easy to do the ESTA application online. Just make sure you have the passport and credit card handy.

"I respond to every comment by private email. So please leave me comments, I love chatting to you" - Josh Bender
Posted by Michele @ Malaysian Meanders on Dec 22nd, 2012
We were so accustomed to flying in the USA that we have to stop ourselves from automatically taking off our shoes in Asia. When I fly, I don't bring water/liquids more than 3 oz., but I ALWAYS buy a bottle of water after I clear security. This has never been a problem in the USA. In Singapore, you have to go through security at the gate, but there's a water fountain on the other side where you can fill an empty bottle. (Keep in mind not to buy liquids bigger than 3oz in Singapore Changi Airport if you're about to fly out.) But at the Hong Kong airport, there have been a few times when I've had to go through security again at the gate area, and there's no place to get more water. I argued, pointing at the store just a few feet away, saying that I had bought the water only a few minutes beforehand. No deal, and I had to chuck it. So, I'm voting for Hong Kong as the most extreme security.
Posted by Bethaney on Dec 22nd, 2012
It really annoys me having to fold up.the stroller for xray especially with a tired child and bags on the handles.
Posted by Alyson on Dec 22nd, 2012
I'm really, really surprised they allowed you to take any water on board, the rule about no liquids has been in place for years now, It includes premixed baby milk, too. There is always water on the plane, not a problem for us, it only annoys me with budget airlines that make you pay for water. I should write a post about the debacle we had in Hong Kong and then Australia over one of the kids' toy guns that found it's way into the hand luggage, it went on for months! Shoes off throughout the Middle East too, can't remember if they make you take them off in London, probably do.I always wear flip flops.
Posted by Latin holmes on Dec 23rd, 2012
Wow tough security