By Erin Holmes & Josh Bender
Home » Destinations » South, USA » Where To Eat In New Orleans – 7 Restaurants You Have To Try
Share with friends Tweet Pin

Did I have rose coloured glasses?

Or was New Orleans going to be as fabulous as I remembered?

3 years ago we were on culinary cloud nine. During an incredible 2-week visit, New Orleans never served up one bad meal. So when New Orleans invited us back to this food-lovers’ paradise we couldn’t resist.

Would The Big Easy be able to once again satisfy our avaricious appetites and delight our increasingly proficient palate? 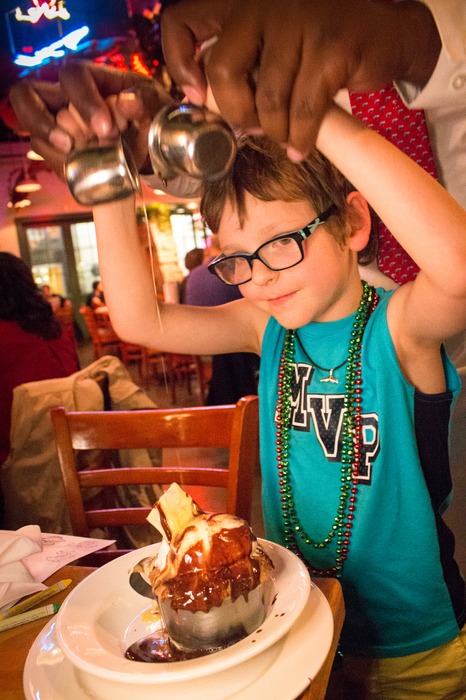 While we were tempted to head back to old favourites, we resisted. All except one. We couldn’t say no another round of fluffy, sweet beignets from Café Beignet. The crispy dough and all-over-your-face icing sugar was my siren on the shores of Royal Street. 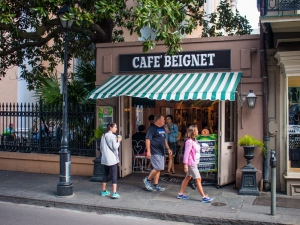 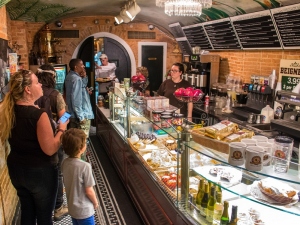 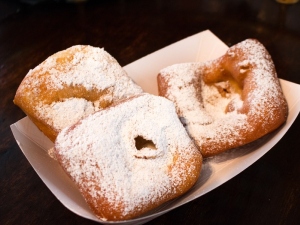 Once we scratched that itch, we were ready to see what new treats New Orleans could dish up.

While in New Orleans we stayed at Le Pavillon, teeming with old world charm and the best of modern conveniences. Oh, and the best roof-top pool in the city. 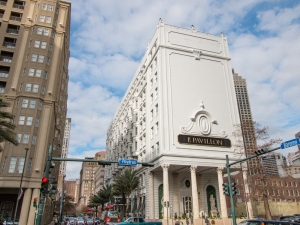 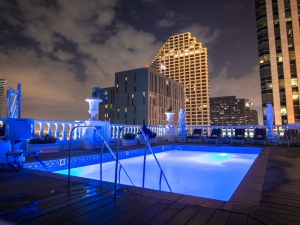 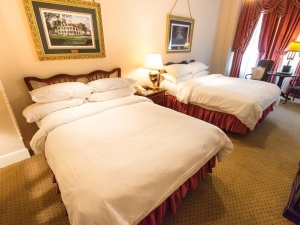 This award-winning seafood restaurant was packed… and we visited on a Monday night! This area used to be the dark, unsavoury gateway to the French Quarter, but these days being only one block back from Canal Street, it was an easy and convenient spot to enjoy a family-friendly dinner. One that I’ll never forget. 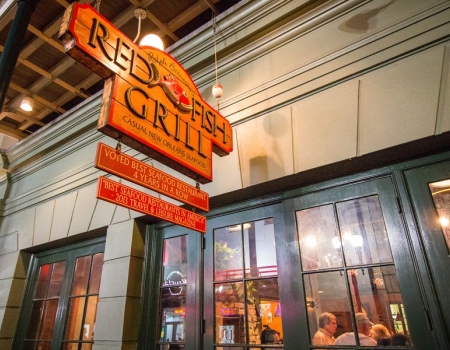 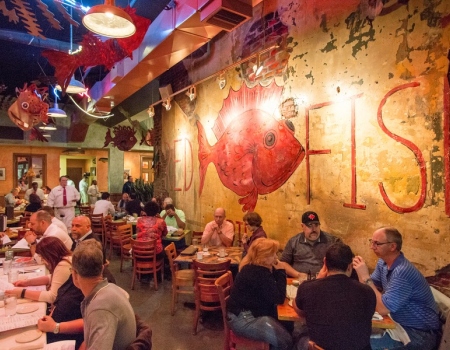 I have to explain. Our family typically doesn’t do seafood (although we’ve made valiant efforts in Finland and Greece). None of us consider ourselves lovers of anything that comes from the sea (aside from my daughter’s obsession with canned tuna). So when our jubilant waiter discovered we all planned on ordering chicken, he was outraged.

Ike is one of the main reasons you have to visit the Red Fish Grill. He has been working there for over 9 years and I insist you request to be seated in his area. Part entertainer, part waiter, 100% hilarious, he made our night an absolute winner. He was funny, encouraging and beyond helpful. Unsurprisingly he’s won waiter of the year award and regularly gets mentioned in reviews on TripAdvisor. Even an Australian can’t help but give him a generous tip. 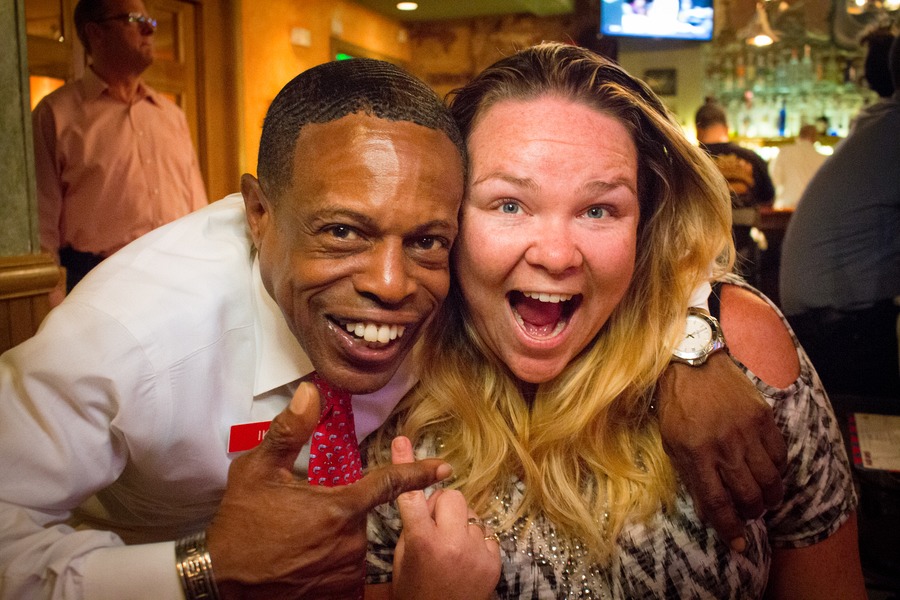 I’m always a fan of restaurants which serve a complimentary starter. And even though tuna tartar was not my ideal, I tried it and it was okay. I can’t say I’m a fan of raw tuna but Josh devoured all of our leftovers and nothing went to waste. 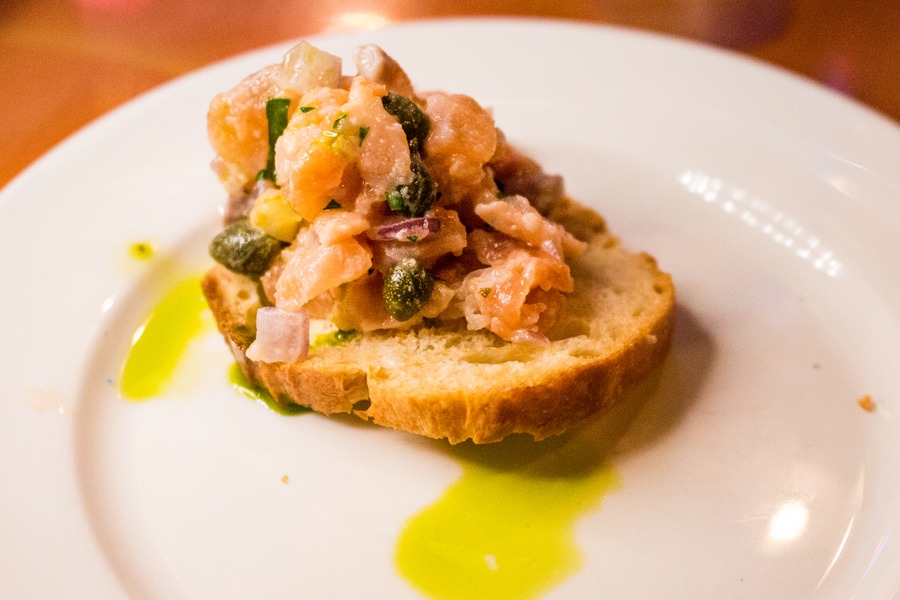 The signature appetiser was fried BBQ oysters, which we were originally steering clear of and Ike would not hear it. We had to try it. Out it came in the shells, fried and topped with blue cheese. One, two, gulp. Hang on, that was delicious. To be honest I couldn’t even taste the oyster, since it was fried and the bold blue cheese flavour covered the slimy creature hiding in the shell. And that was perfect for me. Consider me a convert. 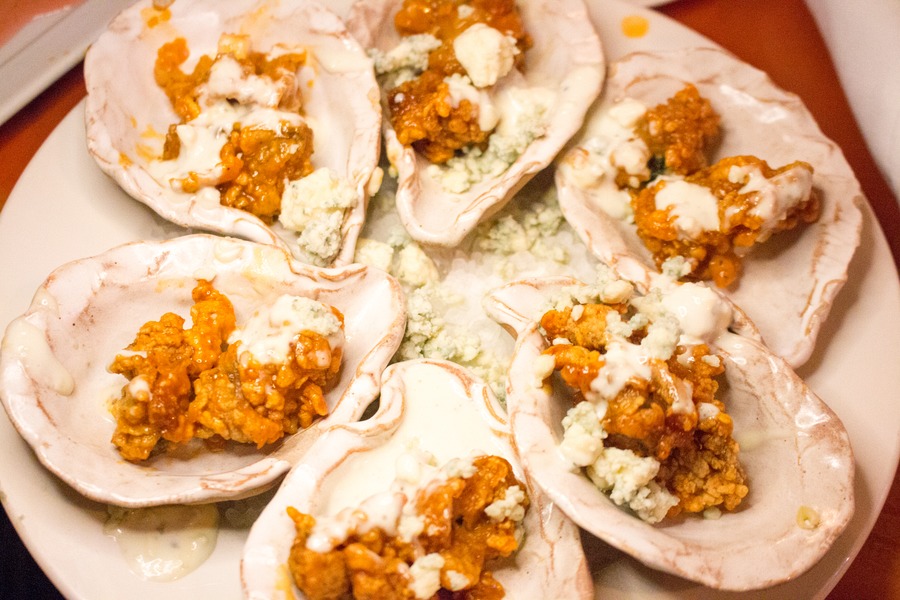 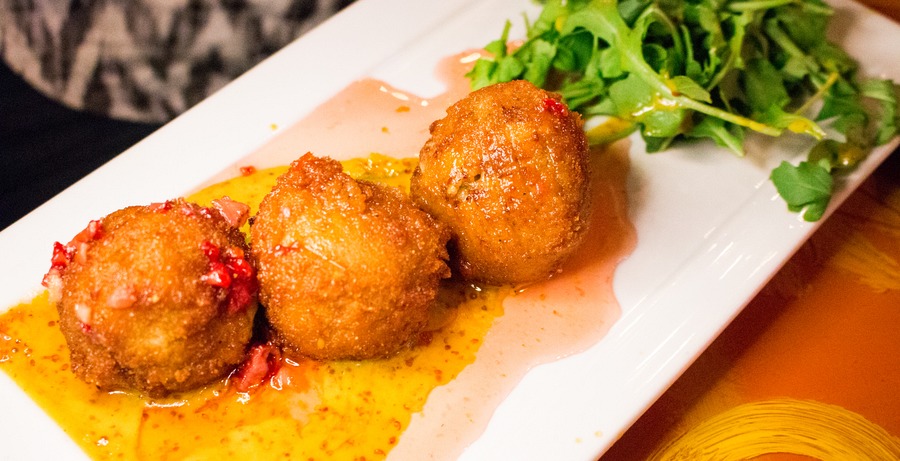 Bread came out hot and crunchy in a cute paper bag. I loved that and soon found this was how it was served in several restaurants around New Orleans. My son decided to skip the bread and eat the butter instead. Parenting win.

By the time the main meal arrived I was full. How disappointing. My Creole jambalaya risotto cried. I did try a few mouthfuls and it was everything I remembered about New Orleans. Charming, bold, flavoursome, delicious. There was no way I was leaving that behind and the leftovers were sufficient for 2 more meals over subsequent days. Now that’s a big serve! 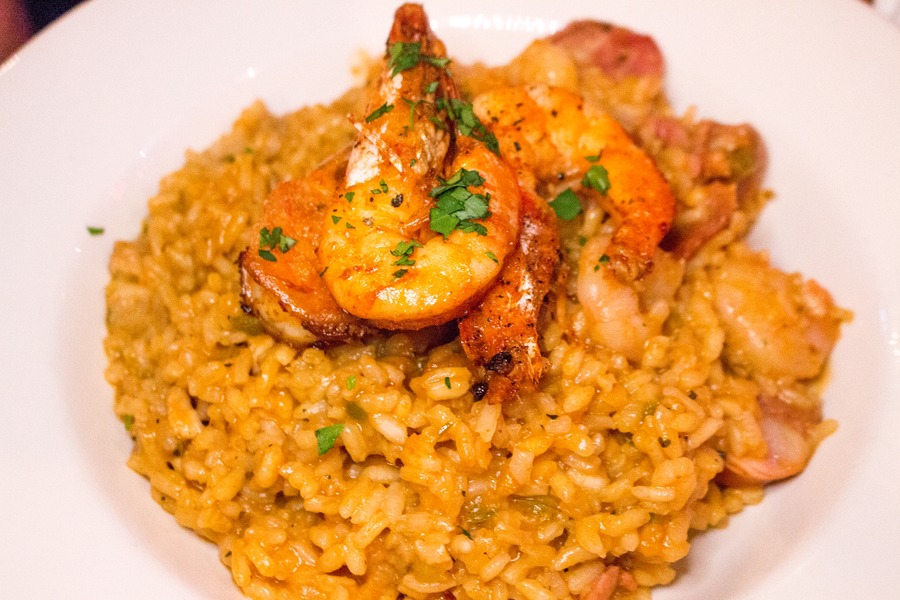 Josh chose the legendary wood-grilled redfish & lump crabmeat, and was licking his lips. The fish was so soft and succulent. We could see why this was one of the restaurant’s most popular dishes. 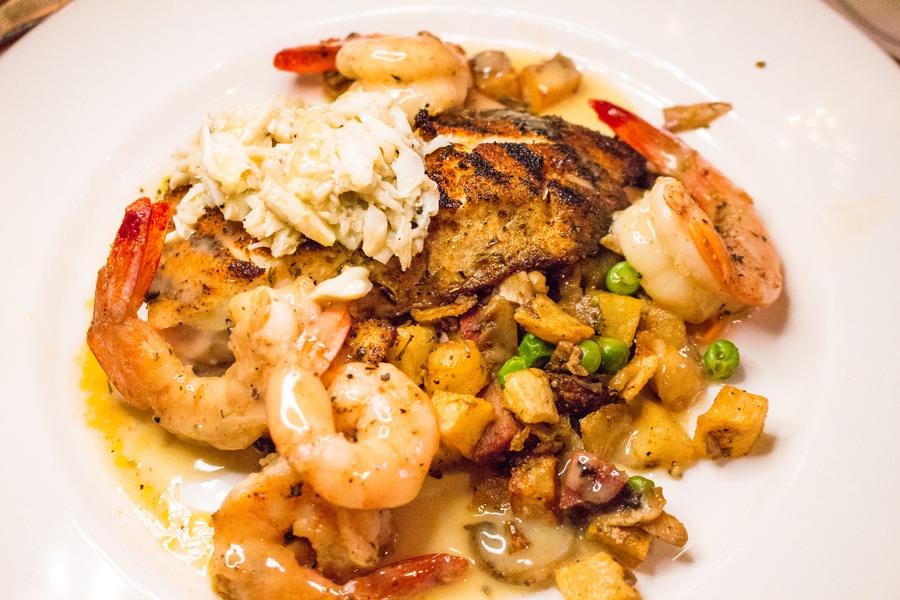 They have a kids’ menu, so Mia opted for a burger, while Caius enjoyed fried shrimp (which I told him was popcorn chicken!). Their meals also came with a soft drink/juice and a bowl of ice cream loaded with sprinkles. 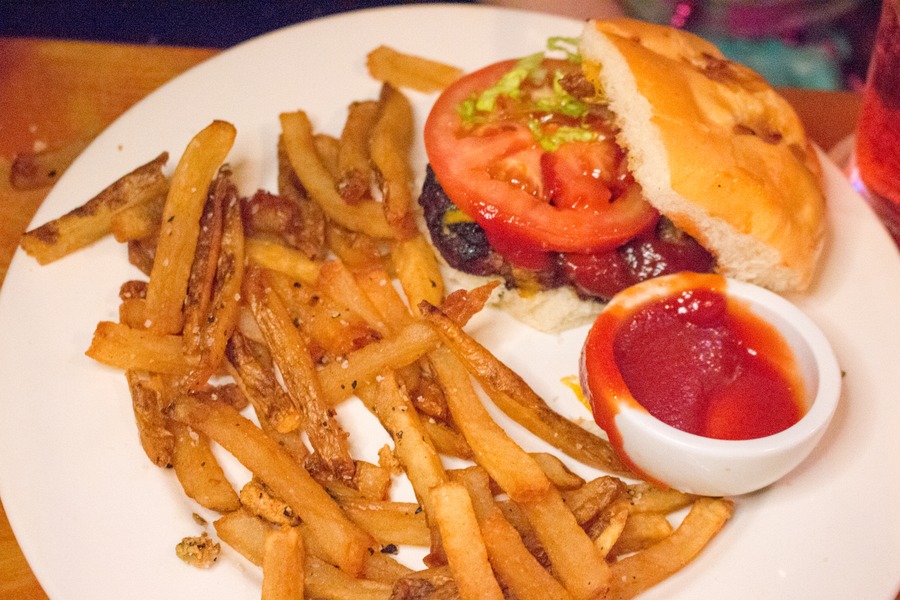 Mia had recently been watching a cooking show and was mesmerised by the flambé technique so she couldn’t resist the mouth-watering banana fosters flambé. Our waiter brought the banana fosters to the table, lit up his fry pan of alcohol and poured the flaming liquid over our ice-cream cake, much to the delight of our kids. 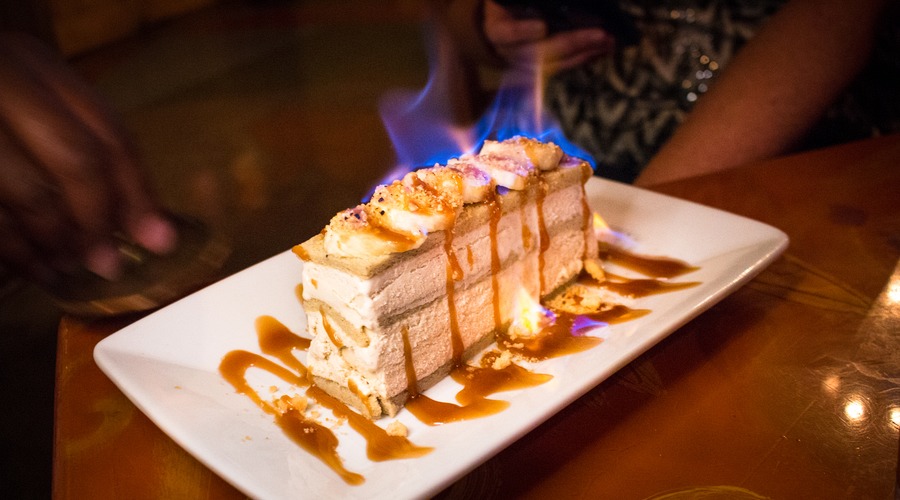 Even though I couldn’t fit another bite, Ike asserted we had to try the double chocolate bread pudding. The bread pudding takes 20 minutes to prepare so it has to be ordered at the same time as the meal. How could I describe it? This dessert was like a chocolate muffin married a delicate soufflé - absolutely divine. It’s regularly rated as the best on Bourbon Street and top 5 in New Orleans. Josh hailed it the king of bread puddings. 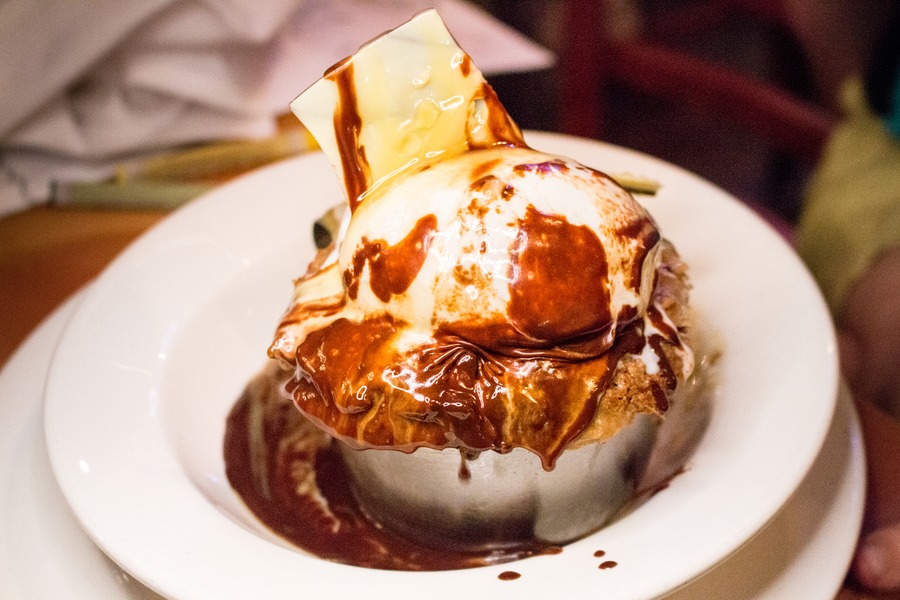 We ate far too much, but held no regrets. Red Fish Grill was the culinary highlight of our New Orleans visit. Once Ike has spoiled you, every other dining experience will be measured against this place. You’ve been warned.

During our stay at Le Pavillon we couldn’t help but notice the glittering Crystal Room near the lobby. This restaurant serves award-winning French cuisine with a generous dose of Louisiana inspiration.

We decided to visit once for breakfast and once for lunch.

The highlight of both meals was Miss Patty Cakes who at breakfast operated the egg station and at lunch the pasta station. She was full of life and southern charm with “honey”, “darlin’” and “love” effortlessly flowing in every conversation. 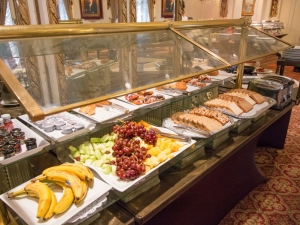 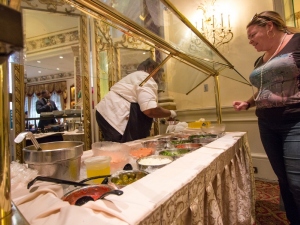 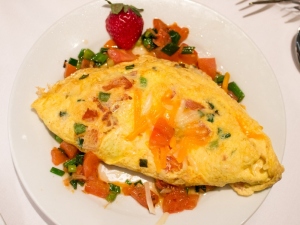 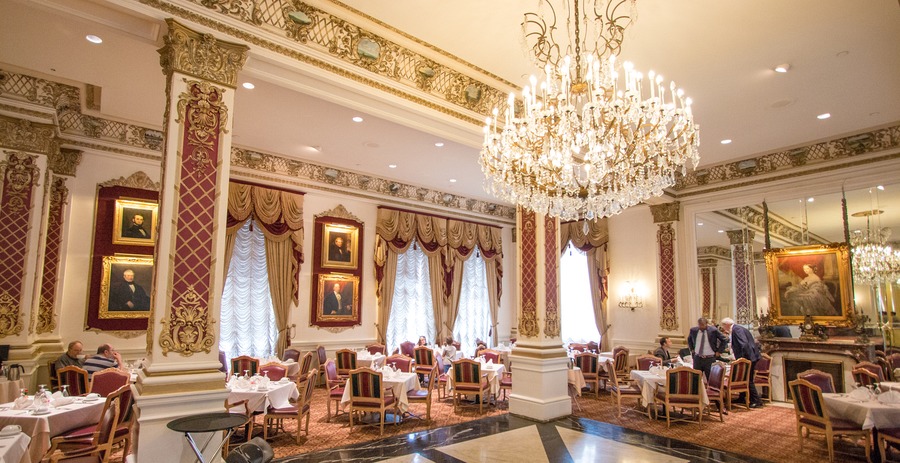 Breakfast was a buffet with bacon, biscuits, sausage, pastries, cereal, etc. And Miss Patty Cakes on the egg station cooking up any omelette, fried egg or scrambled eggs you like. You simply choose the ingredients, she cooks it up and has it delivered to your table. My omelette was delicious!

Lunch consisted of a salad buffet and several hot dishes, including a chicken and Andouille sausage gumbo. But again we couldn’t resist delightful Miss Patty Cakes who cooked us up a make-your-own pasta.

The décor declares fine dining, but the staff are so friendly and warm you feel right at home with and we had no worries with the kids being there. 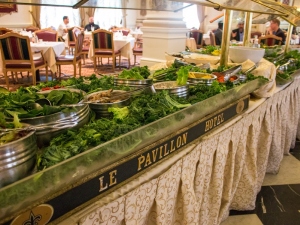 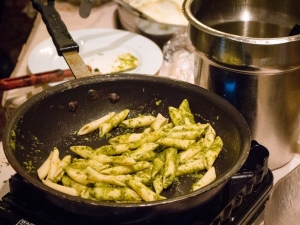 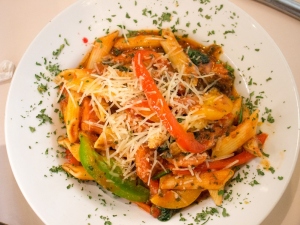 At the gateway to the legendary French Quarter sits this Parisian-style restaurant serving contemporary Creole. 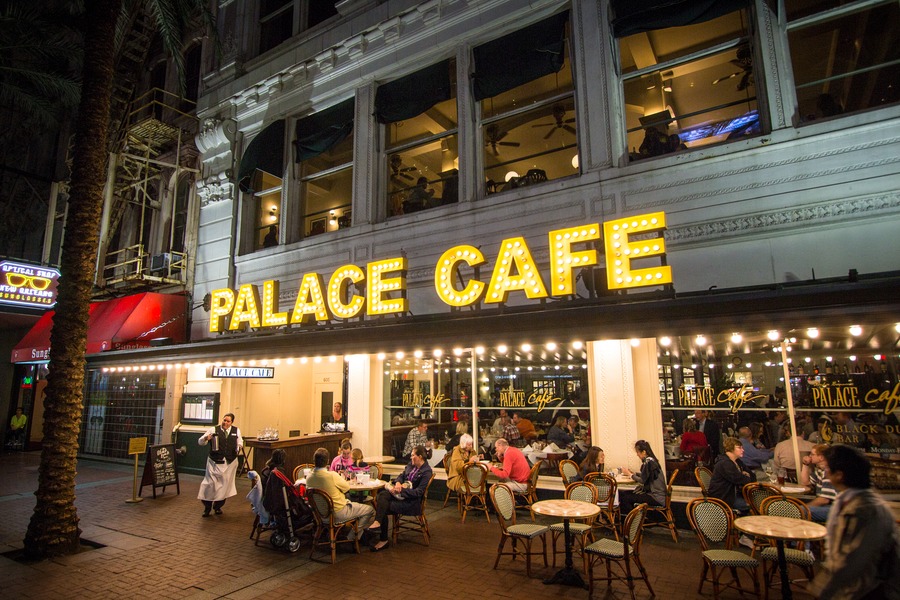 We had a fascinating view of Canal Street through large windows, the perfect spot for people watching.

Once again a complimentary starter was presented, which quite possibly was one of the yummiest things I had eaten in many moons. Tender duck confit on puff pastry with a secret sweet sauce drizzled on top. It was so good I demolished Mia’s and Caius’ servings as well. And didn’t regret it one bit. 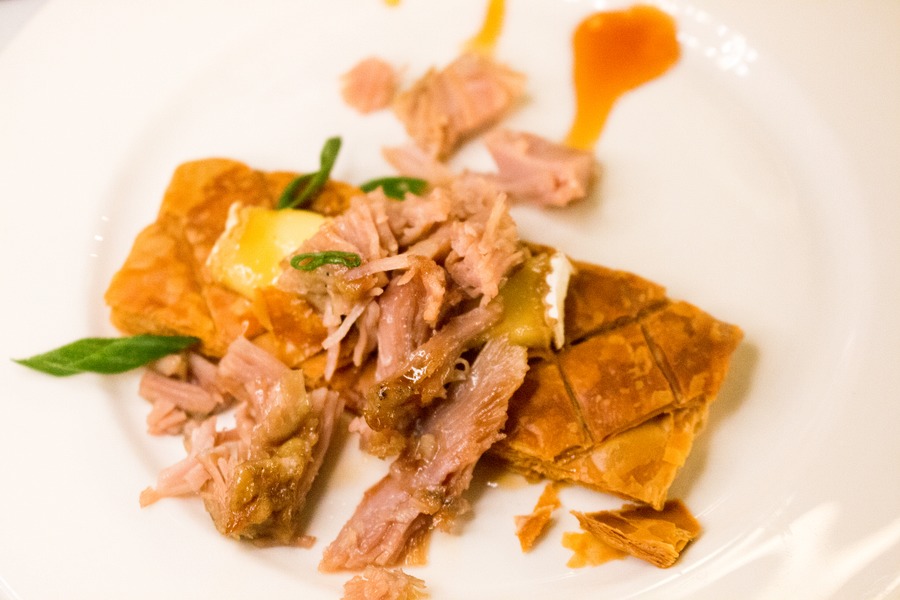 The Palace prides themselves on their prosciutto so we took their recommendation and tried the Petite Campagne - an antipasto platter served with prosciutto, lamb terrine, venison salami, duck rillettes, olives and pickled vegetables. They were right - the prosciutto and salami were extremely tasty with a savoury tang that sat on the palate like a brilliant lingering sunset.