The Heavens Open Up At Giant’s Causeway

The low, menacing clouds drifted overhead as we arrived at the most popular tourist attraction in Northern Ireland, Giant’s Causeway. The visitors centre was unlike any other tourist attraction we’d seen in Ireland. Uber modern and sleek, it didn’t quite fit into the natural, country cottage feel of the other sites we saw. But we didn’t mind, we just wanted to get out of the rain.

Inside our tickets were £8.50 per adult with both kids free (under 5). Smiling jovially, the staff member behind the ticket counter provided some insiders tips on the best way to see the popular site with kids and transport options. We decided the public bus would be better considering the wet weather. Walking the 700-odd-metre pathway would have been a nice, slower paced option, if it had been a sunny day. 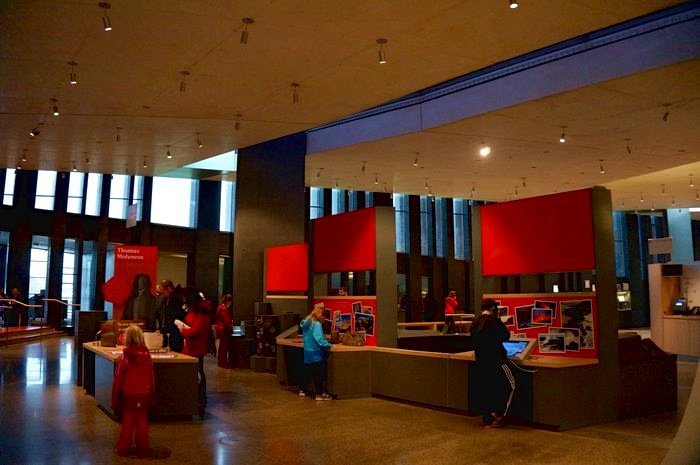 Famished, we raided the café for traditional Irish stew followed up with a tasty pie for dessert. With full(er) tummies, we explored the rest of the visitors centre. It brimmed with bright, colourful displays and exhibits, but as expected, the kids headed straight for the giant, wall-sized movie screen. This played a looping video featuring an animated mythological story of the Giant’s Causeway contrasted with the more widely accepted geological history. It was fun and fascinating. I think the kids watched it at least 3 times before we pulled them away, and they locked their tractor beam vision onto some of the interactive exhibits designed for little hands. These shed light on the modern history of the region as well as fascinating animal life on land and beneath the waves. With their hands busy, Erin and I wandered through the exhibits without worrying about where they would run off to when our backs were turned. 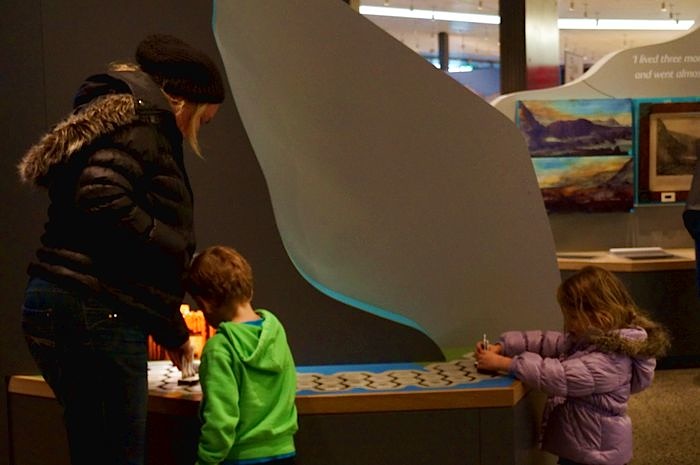 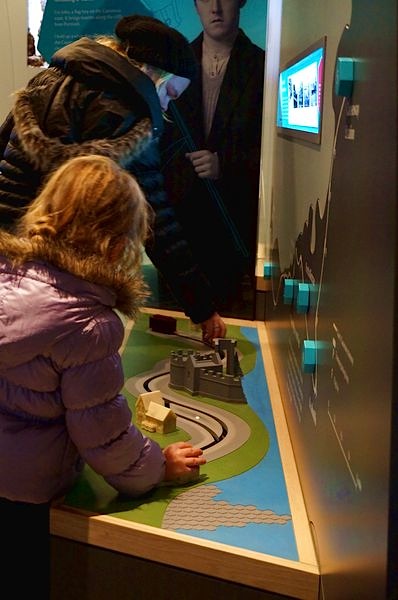 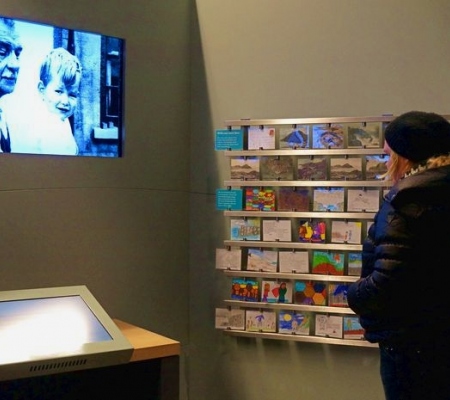 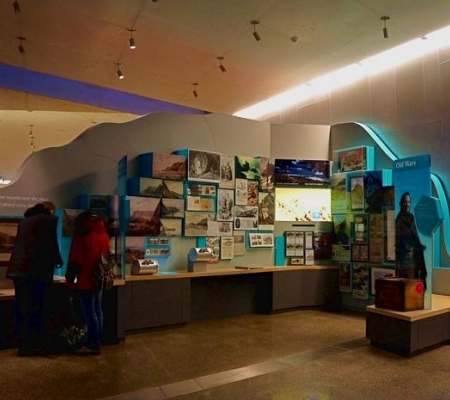 In case you were interested, the famous rock formations were caused by ancient volcanic activity in conjunction with erosion by a glacier. There are matching formations in Scotland which led to the legendary story of two giants, one of them building the bridge only to be tricked into thinking the other giant was much bigger. Afraid, he destroyed the bridge on the way back, leaving the left over rock formations we see today. With giant names like Finn MacCool, how can you resist loving a story like that? In fact, if I have another son Finn MacCool would have to be high on the list of proposed names (just don’t tell Erin!). 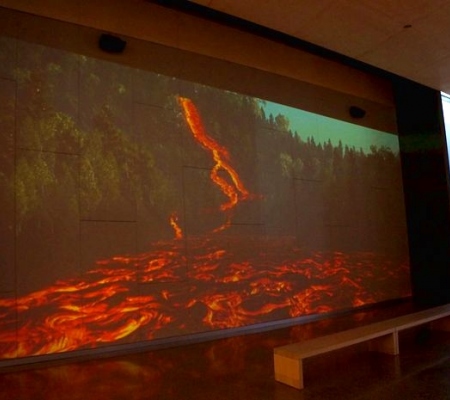 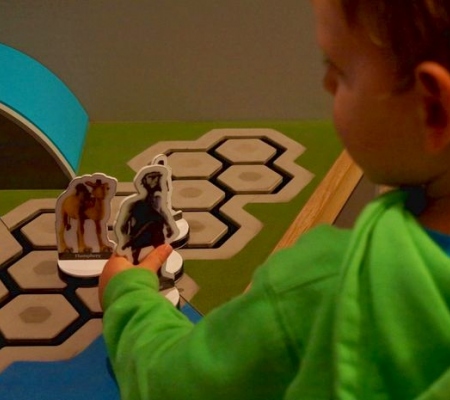 In most tourist attractions we’ve visited audio guides were offered at an extra fee, however here it was included free. Nice! This was a great idea as we were able to learn more about the stunning rock formations and remarkable history of the region at our own pace. Mia and Caius were given a special kids program so they could relate to the story instead of the verbose verbiage mum and dad were listening to.

The bus ride was £2 per adult for a return ticket (with kids free), and took less than 5 minutes to reach the end of the line. When we jumped out the rain was still coming down hard. Unfortunately there wasn’t any shelter around so we just made the best of the soggy situation. The kids didn’t mind at all, in fact they loved hopping in the plethora of puddles. Since they were already wet, we just let them go for it, no point trying to resist. I tried snapping a few photos, but the relentless rain made it entirely awkward, so I have to apologise for the uncharacteristic lack of photos. 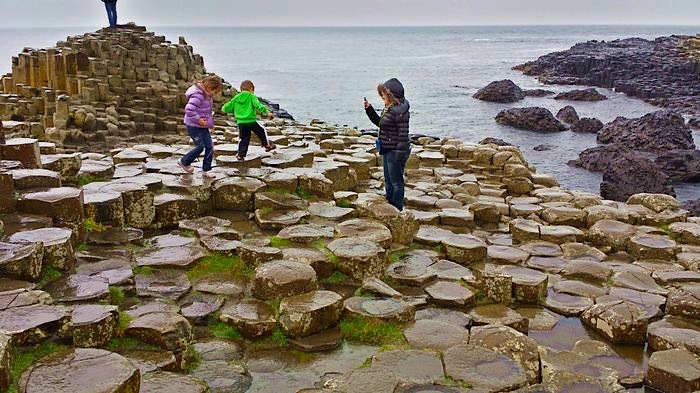 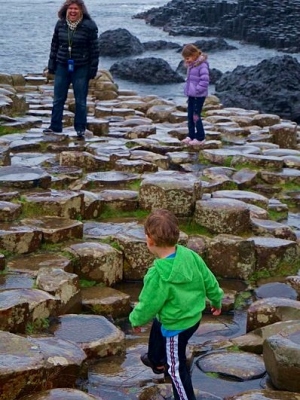 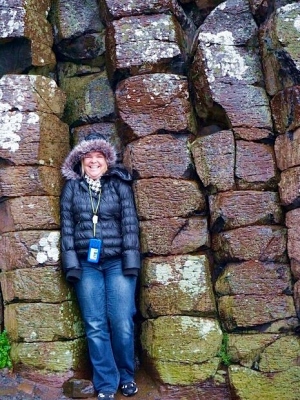 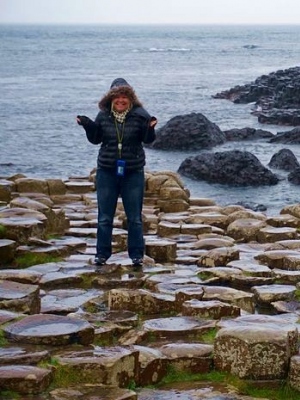 After about 5 minutes of walking on the basalt columns I retreated for what shelter I could find in the shadow of the towering formations and we waited patiently until the bus returned 10 minutes later. And that was pretty much the extent of our pint-sized experience at Giant’s Causeway. 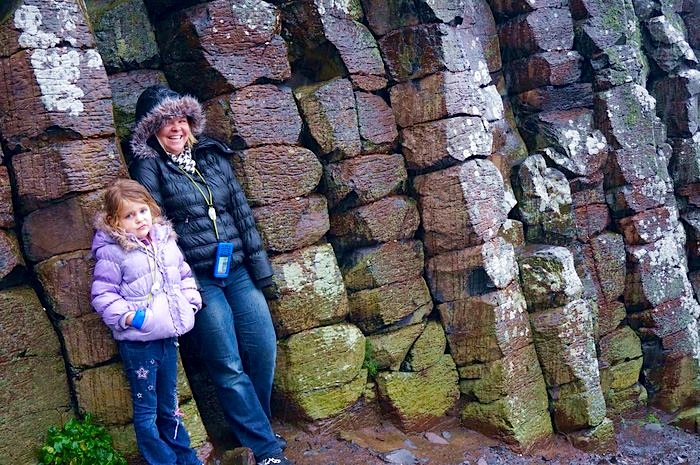 Frustratingly enough, the previous day had delivered perfect weather, and even the following day was equally glorious. We just happened to be at the right place at the wrong time. However, I’d still highly recommend this spot for any traveller in Northern Ireland. The visitor centre alone was worth the ticket price. Just check the weather forecast ahead of time and give yourself a few days wiggle room, and you’ll be right as rain… er… or sunshine. 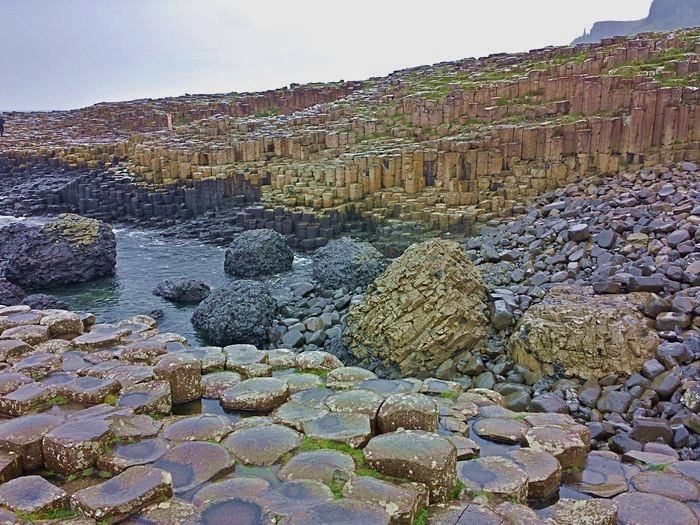 "I respond to every comment by private email. So please leave me comments, I love chatting to you" - Josh Bender
Posted by Karin on Nov 10th, 2013
Love this !
Posted by Jeff @ Go Travelzing on Nov 10th, 2013
I was there last year and loved it. The visitor center was still being built and I think admission was free.
Posted by Jonny Blair on Nov 17th, 2013
Great photos and a great place - I grew up in Northern Ireland and have been here a few times. I'm not sure I agree about paying the 8.50 fee though - it's always been free - perhaps they are charging for the museum these days. You can walk along the coastal path and see the awesome rocks for free, in case anyone wants to avoid the commercial aspect to it. Safe travels. Jonny