Home » Destinations » Southwest, USA » Why You Should Rethink the Google Map That Says it’s 6 Hours from San Diego to Palm Springs to Joshua Tree to Vegas
Share with friends Tweet Pin

Making plans the night before you leave

When we heard they were in Vegas we knew we had to catch up. The original plan was to meet them there on the 12/12/12. What a great day to meet Aussie friends in Vegas! We were due to leave San Diego on the 11/12/12 and still had no plans or anywhere to stay.

You know me at the beginning of my blog and journey. I had 4 months booked before we even left Australia and then it got less and less with finally perhaps a week or two before booking, so this whole nowhere-to-stay-the-next-night was driving me insane.

We hadn’t heard from our good friends the night before we were due to leave so we made plans to drive to Phoenix from San Diego and then to the Grand Canyon. As we walked out of the restaurant my phone rang and it was Dave & Ness, yeah! They had arrived in Vegas early and were already there.

Previously we had discussed doing the Grand Canyon with them and since we had a 7 seater until the 13th I was like “do you wanna go on a road trip?”. They were like “hell, yeah.” So the plans changed that night. The next day we were now heading direct to Las Vegas to pick them up and then the day after to Grand Canyon. That night I booked the hotel my friends were staying at (Monte Carlo) and we looked up Google Maps. 6 hours it said to go from San Diego to Palm Springs, then to Joshua Tree then to Vegas. Ok, that doesn’t sound too bad.

Leaving late, but nothing left behind (that we know of)

It took much longer to pack then we realised and we were so thankful for this giant car, as it was PACKED! We had a massive amount of groceries and bags for some reason. We didn’t leave our beautiful house until about 10:30ish, however we left nothing behind this time. As opposed to our disastrous exit from Anaheim.

Driving on the freeway with no acceleration

It felt like we had just got started when we were screaming down some highway and all of a sudden the car lost acceleration. We were still rolling forward, but the speed was coming down very slowly and the accelerator was doing nothing.

I pulled over to the side of the road and tried to restart the car. Still nothing. The accelerator would get to maybe 20km, but nothing above that and now some weird helicopter-type light had turned on the dashboard.

Josh found the details for the car hire place and we make a call. We have no idea where we are and they have no idea where anything is located near us. They ask me to get off the Highway so we drive super slow onto a side street and into some parking lot.

It takes nearly an hour to figure out where we are and if she can get a tow-truck here and what to do after that. During all this I take the kids to the toilet, have some food, a drink, worry about the time and then try restarting the car.

Magically, the acceleration is back! The light is still on, but the accelerating is back. Another phone call to the company to change the tow-truck plans to driving to the nearest town for a service and vehicle swap if needed.

The service guy is very fast. He grabs some crazy electronic scanner comes out to the car, flicks some switches, tests some stuff and announces after 90 seconds that the car is fine and there was a problem with the electronic “histories”. He said it shouldn’t happen again. Dang fangled new fancy cars!

I still freaked out when I driving the car occasionally, thinking the acceleration was gone, but the car was fine and we had no more problems the rest of our time. We did, however, lose 2 hours to the whole kafuffle. 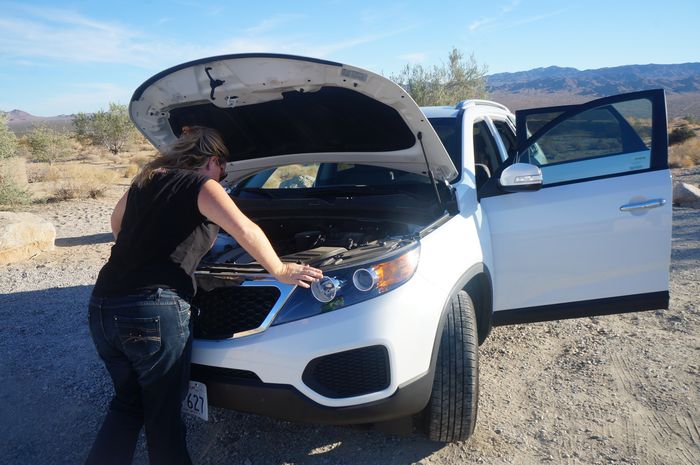 Palm Springs did not take long to get to and I’m kinda glad we didn’t spend the night, as was one of our original plans. It was nice, but didn’t seem like too much to do. We stopped for a toilet break, admired the town and then kept driving, way behind schedule in our journey.

How could we not enter a park with Josh’s name? It had to be done. These strange Dr Seuss-like trees are furry and palm-like all at the same time. They reach towards the heavens like a man praying, thus the Mormons named them after Joshua in the Bible. 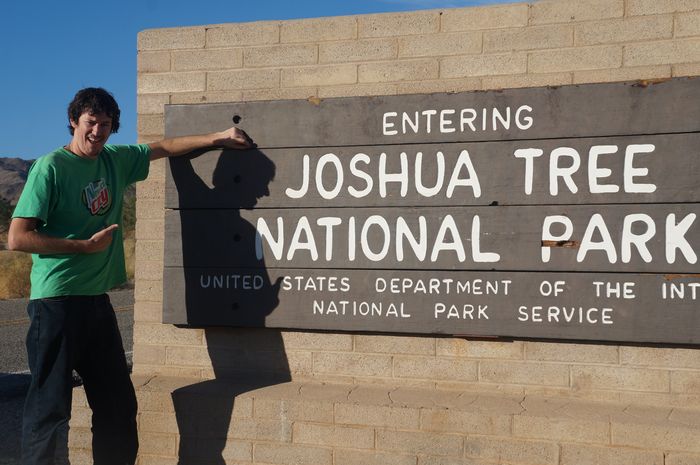 We enter the Park about 3pm. It is humongous and after paying our $15 fee to enter we realise there is no way we are going to cover the majority of the park today. We check out the ‘Oasis’ and then head straight out. It takes over an hour just to drive through the park – I had no idea it was so big! We stopped a few times for photos with these bizarre trees or to climb gigantic boulders. 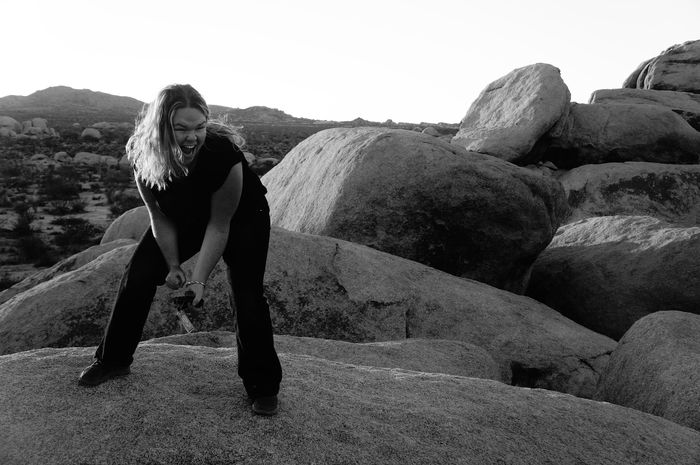 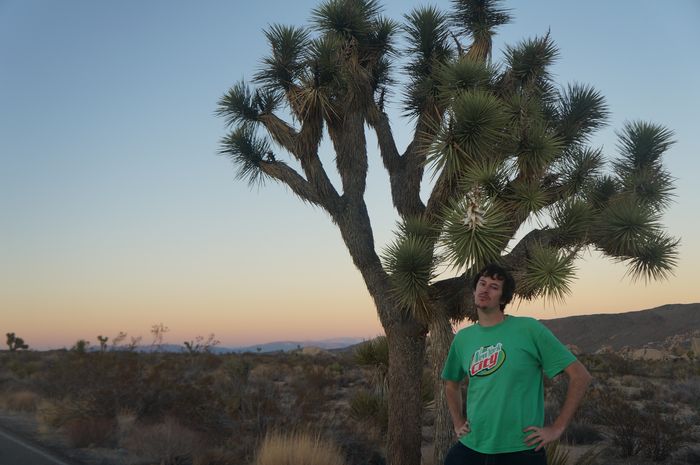 We had to skip the bigger concentrations of interesting things to see and just head straight out of the park as the orange sunlight slowly crept further and further back from the land. It was mesmerising to watch the shadows deepen and tiptoe over the vast expanse as the sun slowly sunk behind the boulders and mountains in the distance. 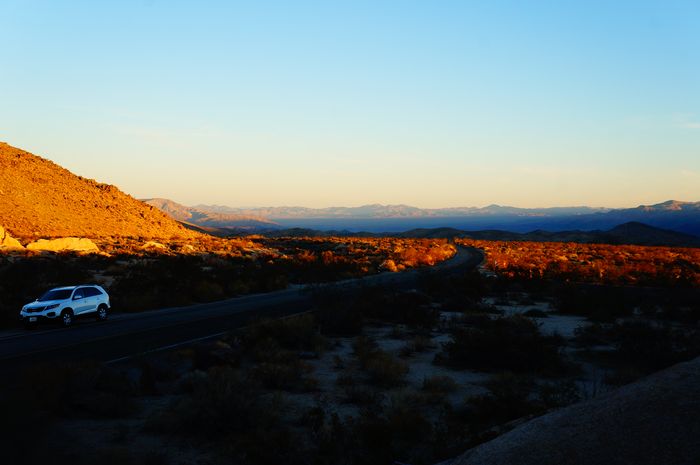 Soon we were driving in pitch black. There were no street lamps and no cars on the road. We drove like this for nearly 4 hours before we saw the eerie glow of Vegas' neon garb on the horizon. The moment we drove into the bright lights of Vegas we were almost blinded, having been accustomed to the darkness.

In the end I was so happy we drove in at night, it was electrifyingly beautiful. We got to the Monte Carlo at about 8:30pm. As we were checking in our friends had just arrived back at the hotel. We spent nearly 2 hours sitting on the bed talking before Josh agreed to stay home and work while the kids slept and I hit the streets with my Aussie friends.

All the buffets were closed so we headed to Denny’s and once again made some last minute decisions about the next day. It’s our last full day with a car so we decide to drive to the Grand Canyon, stay over night and drive the night back. Josh and I place our big bags in our friend’s room and we all go to sleep with a promise of a 7:30am start the next day.