But before we do get to those scary travel stories, I have a few close calls to share.

This is the most terrifying thing that can happen to any parent. And even more frustrating is when you’re in an unfamiliar place and your child is under 5!

My daughter was a pretty easy child, while my son didn’t understand the concept of “slowing down”. We lost him twice in Israel – once at the beach in Tel Aviv and then again in a shopping mall.

Then there was the time he went missing for 15 minutes at Santa Park in Finland. Terrifying!

Thankfully the older they get the less likely they are to wander off and we haven’t had any similar incidences since 2014.

Tip: Pick up a business card at your holiday accommodation and slip it into your kid’s pocket when heading out in case they get lost.

Next to losing your child the most terrifying thing that can happen during travels is someone gets really hurt.

And of course you can guess this also happened to my wild three-year-old son the day before we were about to explore Petra, one of the world’s most amazing wonders. He fell off a bunk bed and fractured his wrist in Israel. No one spoke any English at the hospital emergency room, and as a three-year-old he did not understand why he couldn’t remove his cast. 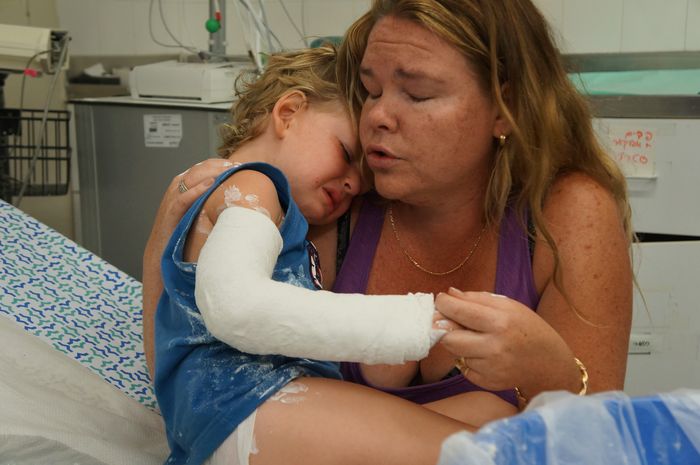 Prepare To Be Afraid

As a family we haven’t come across too many scary situations. We tend to travel to more family friendly destinations and we are rarely walking down dark alleys at night. But some of these travel bloggers have not been so lucky.

A Broken Back In The Amazon

The scariest travel experience we've ever had was deep in the heart of the Amazon when my husband Dave slipped on a set of steel stairs and broke his back. After a 10-hour ordeal to get him out of the Amazon by skiff boat, floatplane, moto taxi and finally a make shift ambulance, we made it to a small hospital in the town of Iquitos.

There was no way in or out of this town expect by boat or plane. Dave spent 8 days in the hospital undergoing CT scans, MRIs where they found that he fractured two vertebrates. The worst part was waiting for an air ambulance home. The hospital in Iquitos couldn’t do anything for Dave expect try to control his pain. So he spent the week on high doses of narcotic painkillers.

Finally after several days of phone calls, gathering up paperwork and organizing insurance, we secured an air ambulance back to Canada where Dave spent another nine days in hospital and another four months of recovery and physiotherapy. It was an ordeal, but also an eye opener and reminder that life can change in an instant. Be grateful for everything that you have.