Is Moncton The Most Underrated City In Eastern Canada?

These I’ve heard of.

But Moncton? Where the heck is Moncton?

Even leading up to our stay in Moncton I didn’t have much information about it. We had accepted a housesitting assignment from Trusted Housesitters in Moncton for 2 reasons. 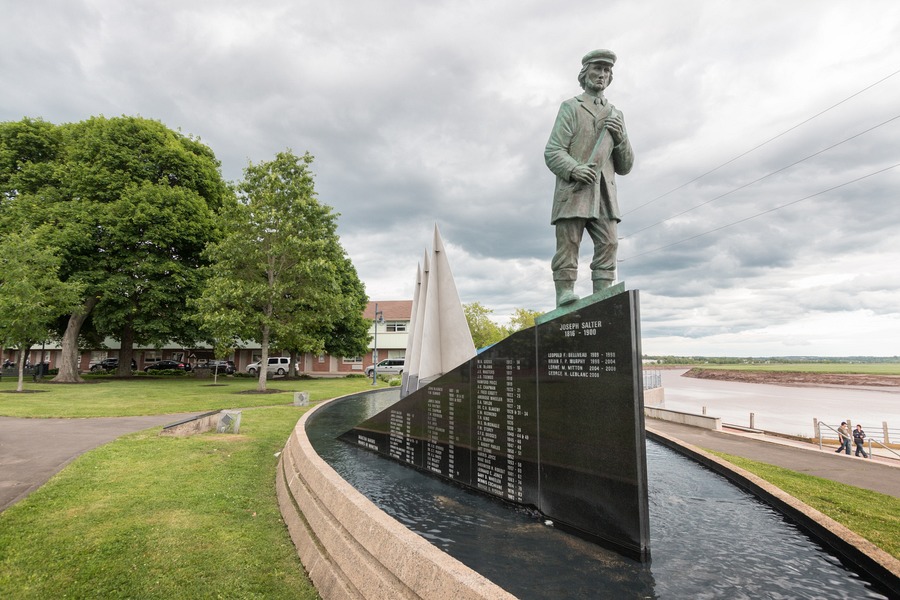 Moncton lies in south-eastern New Brunswick in the Maritime Provinces - the only Canadian province that is officially bi-lingual (English & French). It is a short drive from idyllic Acadian beaches, and magnificent natural wonders such as Hopewell Rocks. 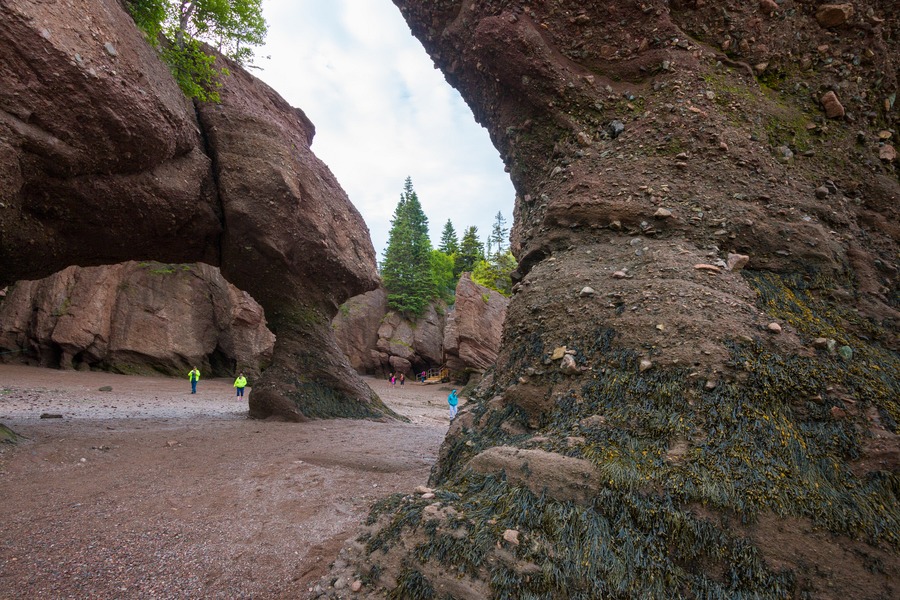 Walking on the ocean floor at Hopewell Rocks

The city itself has a population of some 70,000 (2011 census) and was originally founded back in the 17th century.  It has a really friendly small town feel with large town conveniences.

When we arrived we were a little gob-smacked (in a good way) - a beautifully renovated 100-year-old home on a large block of land. It was like living out in the country. Yet at the bottom of the hill was a brightly lit McDonald’s and not much further, a Walmart Supercentre and 2 cinemas to choose from. 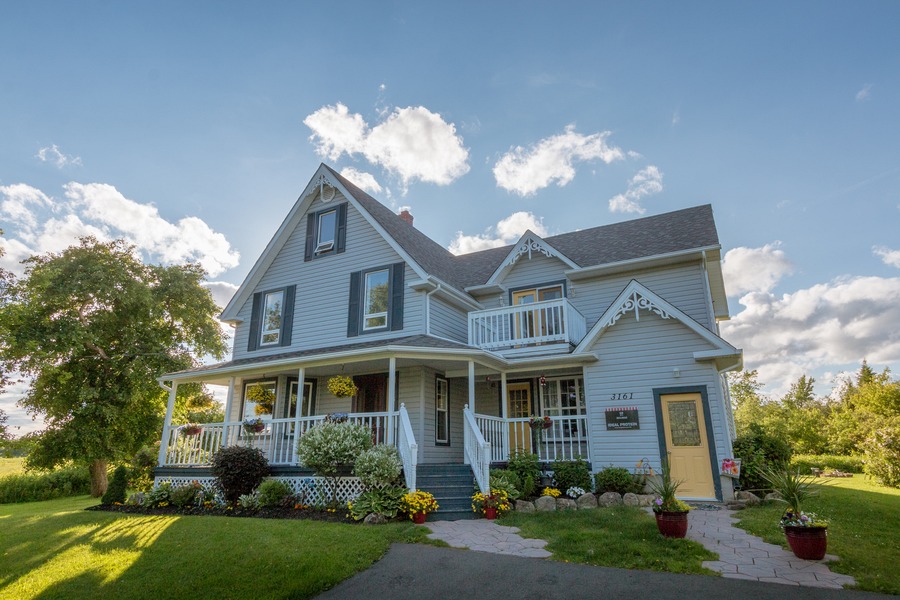 Our house was located on Magnetic Hill, the town’s most famous attraction. It is a gravity hilloptical illusion, where the local topography gives the impression that you are going uphill when in fact you are going downhill.

You can find several tourism attractions on the hill from the Magnetic Hill Zoo (ranked 4th best zoo in Canada) to mini golf to Magic Mountain Water Park. Yes we had a waterpark literally on the same street.

Our house came with a dog that rang the doorbell when he needed to go outside for wees, an African parrot, which barked more than the dog and 2 cats which took care of themselves. So nice to have pets that were so well trained.

You could stay overnight in a small B&B to explore the area.

What We Did In Moncton

Most of the time we stayed home talking to the parrot and playing with the dog, but we also found out there was a lot more to do in Moncton than we thought.

On the first few days we were in town we were contacted by a journalist who asked if we could star in the local paper, Times & Transcript. We met her in the city centre for a photo shoot and interview. 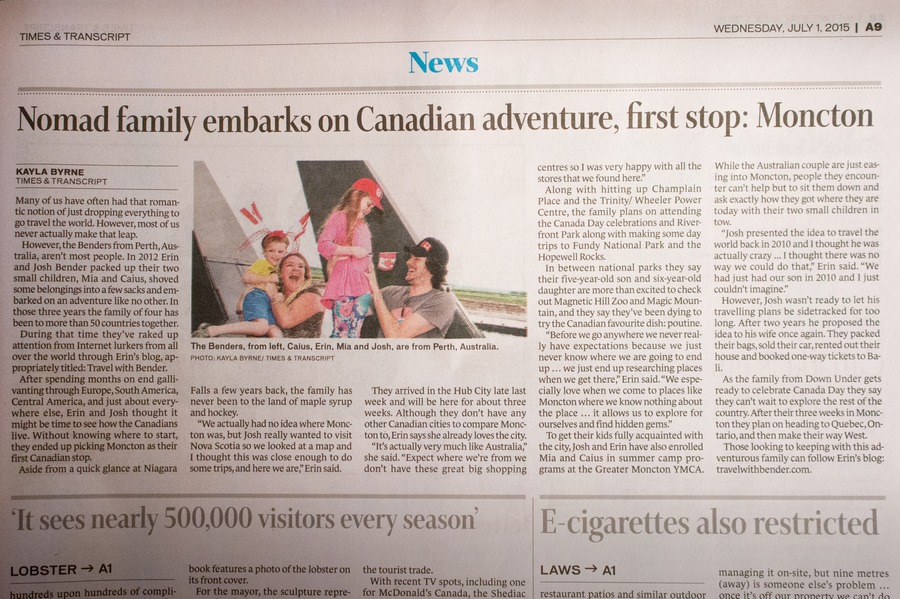 While we were in town the famous annual rib festival was on. And there’s not much Josh likes more than BBQ ribs! They were so nice we visited twice. Our favourite ribbers happened to be from Alabama, USA.

And at CA$24 for a full rack with a few sides, our family was full from one serving. 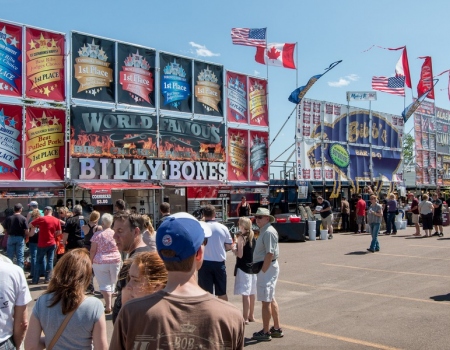 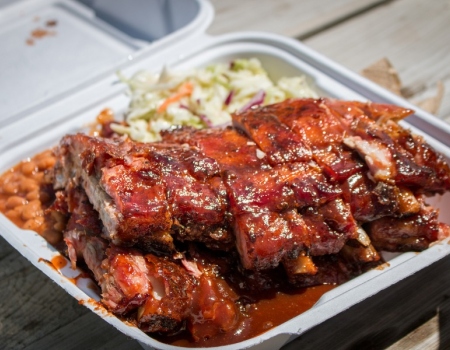 Tip: Parking in town can be tricky during these events, but the side streets with meters were our best bet. Do not park in parking yards with open boom gates - when we came back to our car the gate was closed and we had to do a sneaky lift-and-run.

Much like our time on Perth’s foreshore celebrating Australia Day, Moncton also celebrates Canada Day on its foreshore. We went down to have a little look around, but with the sun setting well past 9:30pm, our little ones couldn’t stay awake for the 10pm fireworks and we celebrated back at home. 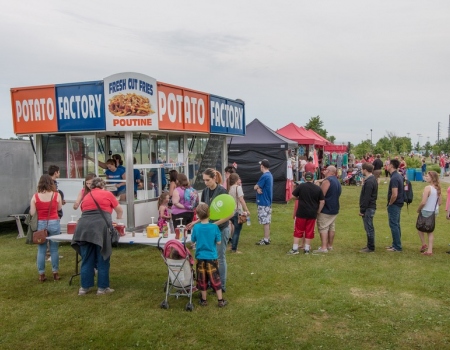 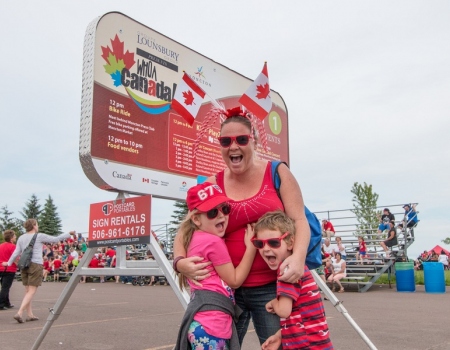 Since we were in town for two weeks we enrolled our kids in two different summer camps. A swim camp run by YMCA and a science rocket camp run by a local church.

Both camps were around CA$150 per week per child. The kids had to bring their own food, but outings to splash pads and museums were included. The kids had a blast. Literally.

We don’t have summer camps in Australia except the annual school camp, so this was a great learning experience for the kids. They definitely want to go again.

Everywhere we went people were just downright friendly, from the summer camp leaders to the newspaper staff, all the way to the dentist. We managed to find a day to visit the dentist, which often doesn’t fit into our busy travel life, but while there I got chatting to the receptionist and she invited us to dinner at her house the very next night.

Turns out they were friends with some good travel buddies of ours. You might have head of them – The Planet D – and they also cooked a real mean BBQ. Plus they have a Yurt. People with Yurts are so cool.

That’s right. The house we were staying at happened to belong to the girlfriend of a dentist. With a few sudden toothaches in the family we took the kids to see Dr Joe. He did a great job and recommended a children’s specialist dentist to our terrified children.

I have to say the children’s dentist was the best we’d been to from UK to Croatia to Australia, and I’m pretty sure he may have cured the kids a tiny bit from their fears. Plus he saved a few teeth that needed rescuing.

The emergency dental work was covered by our wonderful travel insurance provider. They always come in handy, thanks Travel Insurance Direct.

One day while the kids were in summer camp Josh and I took a few hours out of our busy workdays to check out some of the delicious food spots in Moncton that draw the crowds.

We took the 3-hour Hidden Gems of Foodies tour through Taste This!

We met at a central location in the city and started a progressive meal with our guide giving us full details about a few historic locations around town as well. I love these tours. You get a full walking tour, discovering the history of your destination, plus the best food – yum! 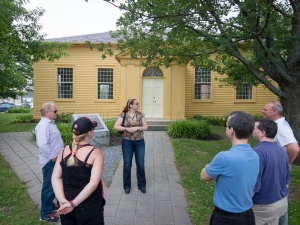 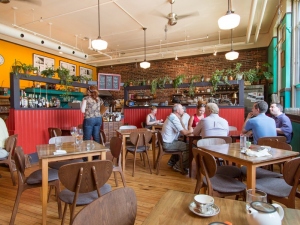 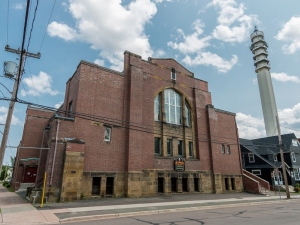 We tried everything from fine dining, a gluten-free pub, authentic Neapolitan pizza and even to a bar called The Laundromat (don’t bring your dirty laundry here). 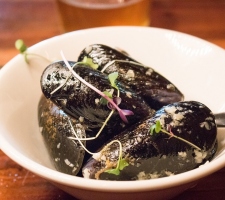 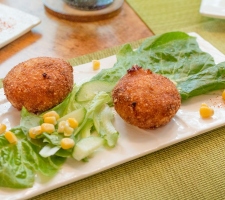 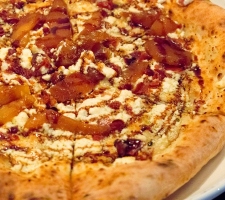 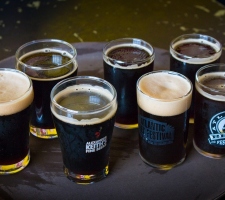 Take a look at me trying mussels for the first time: 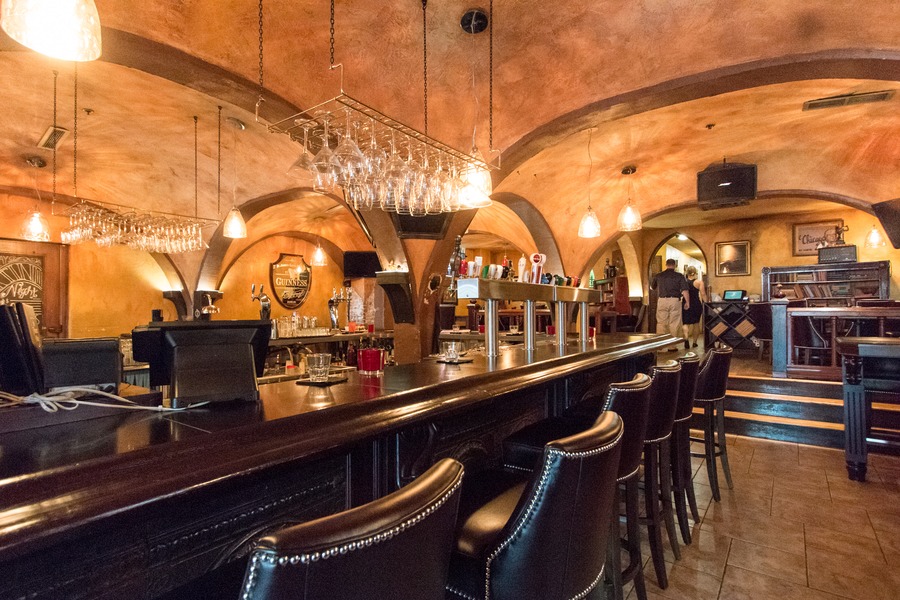 St James' Gate, named after the Guinness brewery in Ireland, sells the most alcohol in the province of New Brunswick 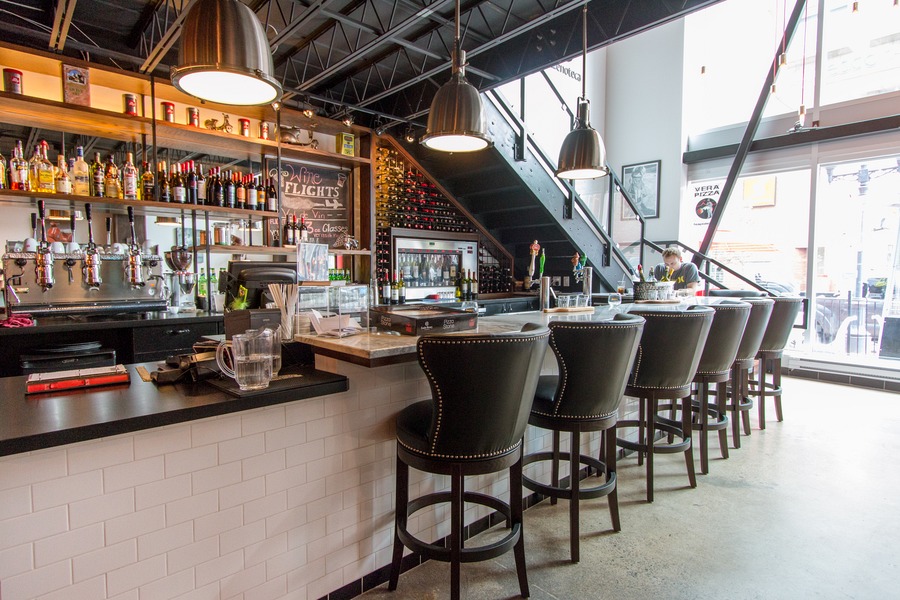 Piatto pizzeria + enoteca creates the most authentic Neapolitan pizza possible, up to the highest standards issued by the Italian governing association. This is legit. 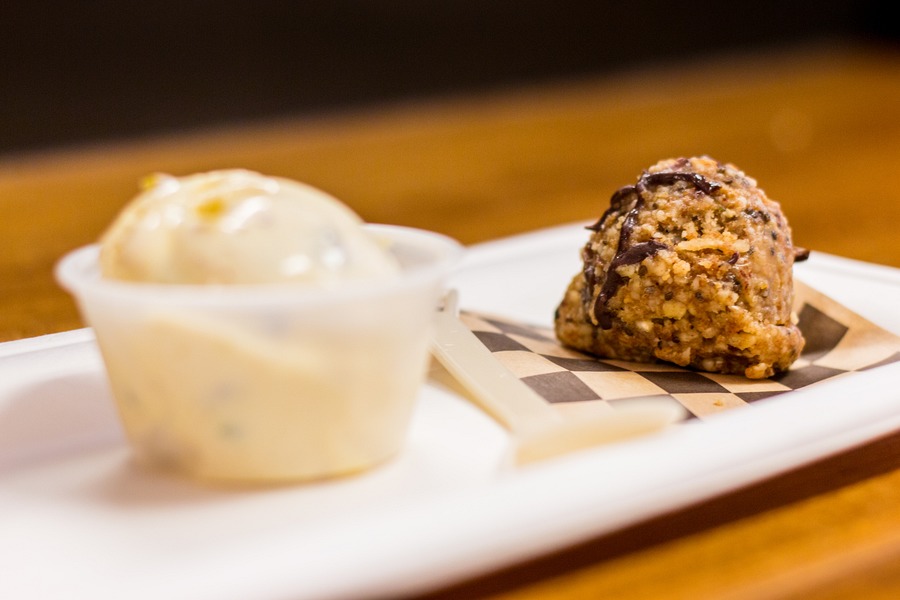 After seeing the famous restaurant, Tide and Boar Gastropub, on the Food Network, we just had to go here. Josh ordered the famous and totally delicious boar poutine. And I opted for the irresistible polenta fries. O.M.G. 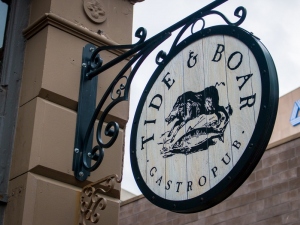 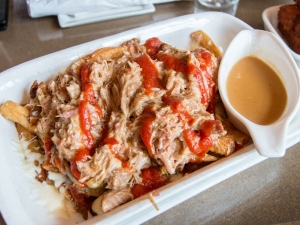 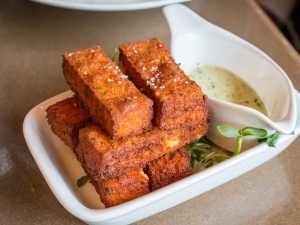